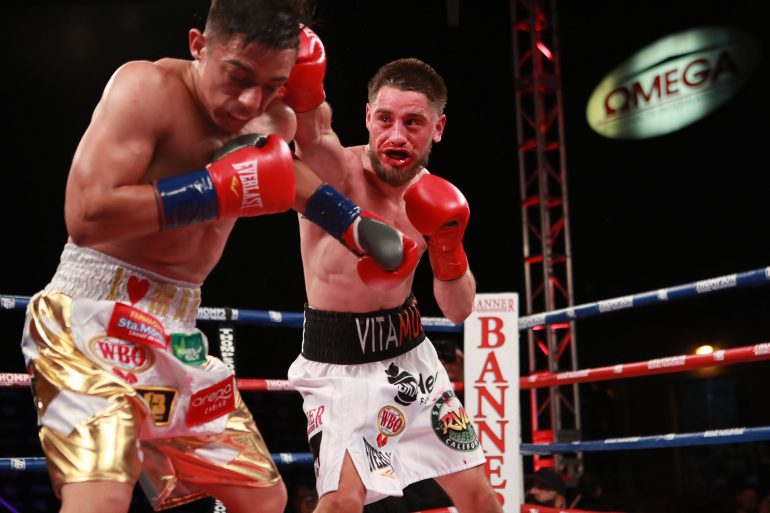 Featherweight prospect Ruben Villa will square off against Alexei Collado on Jan. 31, it was announced Friday.

The 10-round bout will take place at the Hirsch Memorial Coliseum in Shreveport, Louisiana. The fight will headline a three-bout ‘ShoBox’ telecast (Showtime, 10 p.m. ET/ 7 p.m. PT).

Villa (17-0, 5 knockouts), who resides in Salinas, California, was an amateur standout before turning pro in June of 2016, notching two victories over WBO featherweight titleholder Shakur Stevenson.

In his last bout on Sept. 20 in Midland, Texas, Villa dropped Jose Durante Vivas once en route to a one-sided decision victory. In his previous fight on May 10, the 22-year-old was able to grind out a hard-fought unanimous decision victory over Luis Lopez.

The southpaw Villa is ranked No. 9 by The Ring. He believes he is already a legit contender and can face any of the top fighters at 126 pounds.

“I know my opponent has a good record of 26-2 and he has heavy hands, but he is wild,” said Villa, who is co-promoted by Banner Promotions and Thompson Boxing. “I feel that I am close to a title eliminator by the middle or at the very latest at the end of 2020. ‘ShoBox’ has helped me with my recognition and showcasing my talent. I know I’m close to making that next step up to contender (status) so I have to look impressive on Jan. 31.”

Collado (26-2, 23 KOs), who is originally from Cuba and now lives and trains in Miami, Florida, has won his last seven bouts since losing by knockout to then-unbeaten Omar Douglas in June of 2016.

In the co-feature, welterweight Taras Shelestyuk will face Alejandro Davila of Mexico City in a 10-round bout.

Shelestyuk (17-0, 10 KOs), who is originally from the Ukraine and now resides in Los Angeles, has dealt with managerial issues, where he has only fought once in the last two and a half years. Davila (19-1-2, 7 KOs) suffered his first loss as a pro in his last bout on Nov. 23, losing by knockout to Michael Zewski.

In the opening bout of the ‘ShoBox’ telecast, lightweight Jerry Perez (12-0, 9 KOs) of Victorville, California will square off against Armenia’s Zhora Hamazaryan (9-1-1, 6 KOs) in an eight-round bout.