Cem Kilic is no longer the fat kid in the corner 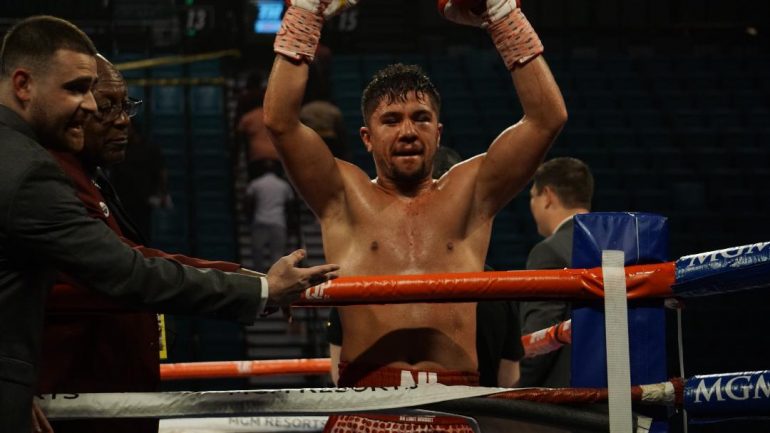 The whispers from across the room would invariably slide to his small, chubby ears. Cem Kilic can laugh now. Back then, however, it was biting to hear his friends murmur among each other when Kilic would show up to their homes, “Hide the food, Cem is here.”

Kilic, of Turkish descent born in Germany, was 10. He stood about waist high to most adults. He was also a “human meatball,” as Kilic describes himself then, weighing 150 pounds.

“That’s stayed with me all of this time,” Kilic recalled. “My friend would say not to bring me over, because I’d eat all of their food. As a kid, you take that very seriously.”

Boxing was a way out. It forced him to slim down, and it also provided him a way to get out of the tension-filled German streets he grew up in, with childhood friends either killed or in prison.

On Saturday night, from the Mark G. Etess Arena in the Hard Rock Hotel & Casino in Atlantic City, New Jersey, Kilic (14-0, 9 knockouts) will make the next progression in his boxing odyssey when he takes on Steven Nelson (15-0, 12 KOs) on ESPN’s 10-round super middleweight co-feature under the Jesse Hart-Joe Smith main event.

It’s light years from when Kilic was a portly kid struggling with an identity and being mocked by his peer group. Things came to a head when Kilic was 12. He got into a fight a close friend for making fun of him.

Kilic punched the kid in the face. The kid struck back and got Kilic on the ground.

“I remember that, because my pride was hurt, and he actually whipped my ass,” Kilic said. “My close friends and family were picking on me. That’s when I felt I had to make a change. I broke my hand fighting that kid. My friends were hanging out one day and we started going to go to the boxing gym. My hand took six months to heel, and when I was around 13, that’s when I started going to the gym.”

By 14, Kilic lost about 50 within eight months. Walking up the steps was no longer followed by big, heaving breaths. Clothes that didn’t fit suddenly would glide over his legs and his waist without the added yank.

Kaya, his older brother, trained Cem (pronounce Chem) up until he was 16. But Kaya lost discipline and began working. Cem stayed with boxing.

“It was more than just losing the weight, I always wanted to do something in sports and found boxing,” said Kilic, who’s trained by Hall of Famer Buddy McGirt. “The first day at the gym, I was sparring. I beat a kid who had experience pretty good. The coach there told my brother that I have a lot of talent and he wanted to see me every day.

“That did it. I was 13 and filled me with a lot of confidence. That situation changed my whole life. I grew up in a neighborhood and I was getting in trouble. I stopped doing what they were doing, focusing on training. It was drugs, stupid things. I lost a lot of friends. Some died. Some wound up in prison.”

Kilic, who will be paired with McGirt for the fifth time, was the only one to survive without being locked up or killed from his teenaged social group.

“I saw one of my close friends in 2018 when I got back to Germany, and he told me he should have stayed with boxing,” Kilic said.

Kilic hears Nelson is a good opponent. Nelson is 5-10, but he hasn’t fought the caliber of opponents Kilic has faced.

“This will be my first 10-rounder, and Nelson has never gone 10 rounds, either,” Kilic said. “I’ll stalk him down and break him down. This will be a real test for Nelson.”

It sounds as if Kilic has passed more than his share of his tests.