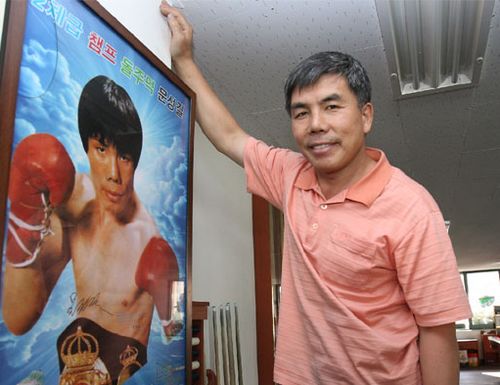 Marauding punching machine Sung Kil Moon was a relentless pressure fighter, who, though crude at times, had an effective style that saw him win a world title at bantamweight and then drop down to junior bantamweight where he enjoyed a lengthy title reign.

Moon was born in the small city of Yeongam, South Korea, over 300 kilometers (approximately 186 miles) south of the capital Seoul, on July 20, 1963. He was the second oldest of five children.

He became interested in boxing while in elementary school, though it took awhile for him to progress.

“There was no TV in the village,” Moon told The Ring through Andy Kim, “so I had to go to the other village to watch boxing and I fell for it but there was no way to pursue it. The passion stayed with me till later but I didn’t know what to do.

“I got an opportunity to start boxing after enrolling in high school and I was self-funded. They told me I couldn’t get a scholarship if I don’t win a tournament but I started anyway and ended up getting one after winning silver at the King’s Cup.”

Moon moved to Seoul and lived in the athletes’ village for five years. During this time he thrived, reaching the quarter-finals of the 1984 Olympics.

“I was confident that I [could] win gold at the Los Angeles Olympics,” he said. “I stopped Robert Shannon from U.S.A. by RSC (stoppage) in the third round. He was a strong candidate to win the tournament. I wasn’t really in shape for the next fight. I got cut from a headbutt; I lost by the referee stopping the fight.”

Moon went on to win gold at the Boxing World Cup the following year. His amateur career culminated in his crowning moment, winning gold at the 1986 World Championships.

Moon exited the unpaid ranks with an impressive 151-6 ledger and made his professional debut in March of 1987. He was quickly fast-tracked toward the world title; he won his first six fights, all inside the distance. His handlers ambitiously brought unbeaten WBA bantamweight titlist Khaokor Galaxy to South Korea, just 17 months after Moon’s debut.

He justified his handlers’ faith in him, winning a six-round technical decision, due to a cut from an accidental headbutt. Moon made two successful defenses before he was lured to Thailand to face Galaxy in a rematch.

This time Moon was unable to repeat the victory and lost a wide unanimous decision.

“Galaxy looked like he’s two weight classes heavier than me,” he explained, “but we were in the same weight class. I wasn’t overpowered [and went the distance].”

More often than not, a fighter will move up in weight after losing his title, Moon took the unusual decision to drop down in weight.

“I wanted to move up in weight but my promoter demanded I go down.” he said.

It proved a shrewd move. After a comeback win, he challenged WBC 115-pound beltholder Nana Konadu. The two exchanged multiple knockdowns before the fight was stopped abruptly on cuts in the ninth round. Moon was ahead and was awarded the decision.

In his maiden defense, Moon stopped well respected two-time world titlist Gilberto Roman in eight rounds. It was the Mexican’s last fight; just a couple of weeks later, he tragically passed away, atb age 28, in a car accident.

In March of 1991, Moon and Konadu met in a rematch in the unlikely setting of Spain, where the Ghanaian had established roots. Another frenetic encounter ensued before the heavy hands of the Korean iron man put pay to Konadu in the fourth round. Looking back, Moon feels it is his proudest moment in boxing.

“Winning by fourth round TKO versus Konadu,” he said. “Everyone thought I’d lost but I won.”

Over the next two years, he retained his title on six occasions. Moon stopped Mexican veteran Armando Salazar (TKO 8), edged Greg Richardson (MD 12) and bludgeoned Hilario Zapata (TKO 1) before he started to show signs of his powers waning. He barely got past Carlos Salazar (SD 12). In his next fight Moon lost his title to Jose Luis Bueno (L SD 12).

The then-30-year-old decided he’d had enough and walked away from life as an active fighter.

“I didn’t like my promoter,” Moon flatly said. “I wanted to fight at junior featherweight too. I wanted to become a three-weight champion but that didn’t happen.

“I wanted to move up; he wanted me to go down. One day, a reporter wrote about my retirement and then there were misunderstandings between me and the promoter.”

American folk singer Mark Kozelek named one of his projects “Sun Kil Moon,” in homage to the Korean fighter.

Moon, now 56, is married with two children and lives in Seoul. After retiring from boxing, he ran a gym before selling it to a friend. He currently runs three Teriyaki fried rice restaurants. He would like to open up a billiard club.

BEST JAB
NANA YAW KONADU: He threw the one-two followed by the jab which was really strong. He became champion after beating Gilberto Roman.

BEST DEFENSE
GILBERTO ROMAN: He was very experienced and savvy.

BEST HANDSPEED
KONADU: He was a tall fighter with a good one-two. I got knocked down by that shot once but then I knocked him down twice.

BEST CHIN
KHAOKOR GALAXY: Chiaki Kobayashi and Kenji Matsumura both had good chins but I knocked them out [Editor’s Note: Matsumura lost a technical decision]. Khaokor Galaxy took many great counter-punches but he didn’t go down. He’s a southpaw with many great physical attributes. I think he managed to stay in great shape because he’s from a hot country.

SMARTEST
HILARIO ZAPATA: I beat him but he slipped counter-punches very well. He was a former champ, savvy and smart.

STRONGEST
GALAXY: If I bumped into him, I would bounce back. He was really built well. My eye was cut after a butting.

BEST PUNCHER
KONADU: I got knocked down by him. Many had great power but Konadu had the most.

BEST OVERALL
ROMAN: Roman, then Konadu and Galaxy. The reason I picked Roman is because he has great defense and is very experienced, great agility and explosive. He’s not a one-punch knockout artist but still capable of changing the fight with one punch.

Andy Kim helped coordinate and translate this feature. The Ring appreciates his assistance.