Constantin Bejenaru on first loss: ‘I learned something about myself’ 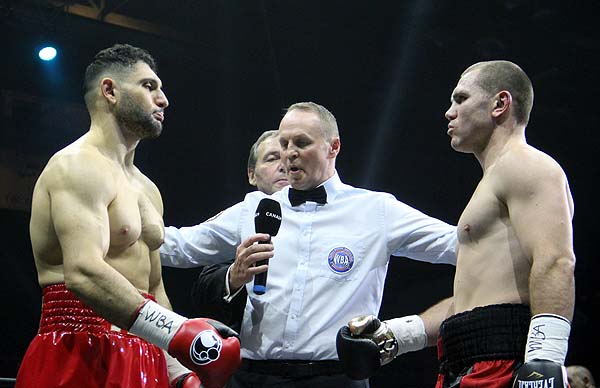 It’s easy for us on the outside to look at a loss and think, “Well, in the long run, maybe that will be beneficial to the boxer.”

Losses hurt; they sting, puncture the pride, dent the ego, dampen the optimism of an upward ascent continuing, of beefed up paydays the future promises.

However losses can truly pay dividends later after that initial sting wears off.

With all this in mind, I reached out to cruiserweight contender Constantin Bejenaru, age 35, who was stopped by WBA beltholder Arsen Goulamirian (26-0, 18 knockouts) in France on December 28.

“The outcome was not what I wanted or planned for when I accepted this fight but the experience of going to France was a good one,” Bejenaru told me. “Other than a single fight in my birth country of Moldova, all of my professional fights have been in the United States. My team and I were treated well by the local promoter Sebastien Acaries’ Univent Boxing but we understood that we were fighting in Arsen Goulamirian’s home. Acclimating myself to the climate and time zone, winding down my training in an unfamiliar place and fighting the champion on his home turf were all new to me. I plan to learn from this experience so that the next time, I have the opportunity to participate in a fight of this magnitude, I will know what to expect and will be well prepared.”

Brooklyn’s Bejenaru (14-1, 4 KOs), promoted by Dmitriy Salita, spoke more on the experience: “This was the biggest event of my career and the lead-up to the fight was very exciting. There was a lot of local interest in the fight; posters were everywhere in the city and the biggest newspaper in Marseille (in France) had stories about the upcoming fight every day. And on fight night, the Palais des Sports de Marseille, which is a beautiful, modern 8,000 seat arena, was a near sellout.”

He delved into the actual bout too. “The fight started well for me. My jab, my combinations and my quicker hands and feet were all working effectively for me. One judge had me winning the first four rounds and the two other judges had me winning three of the first five rounds. Goulamirian is a very strong fighter and he was able to apply more pressure as the fight entered the middle rounds. I stopped using my legs the way I should and was getting caught too often on the ropes and in the corners.”

The end came after nine rounds. “I had expended a lot of energy in the early rounds, in part, I think, because the magnitude of the event was something new to me and it began to take its toll by the eighth and ninth rounds,” said Bejenaru. “My corner saw that I was starting to take heavy shots and decided to stop the fight before I went out for the 10th round. I have a good team that was looking to protect me and I accept their decision.”

What takeaways does he have from the experience?

“I see this as an important learning experience that will make me better going forward,” Bejenaru said. “I am always learning, always looking at my performance in a fight and working to make corrections. In this fight, I will learn not just from reviewing what I did inside the ring on fight night but also from the experience of fighting in another country on my opponent’s home turf in a major fight. As with all of my fights, I learned something about myself. And I have a much better understanding of the preparation I will need the next time I am given this kind of opportunity.”