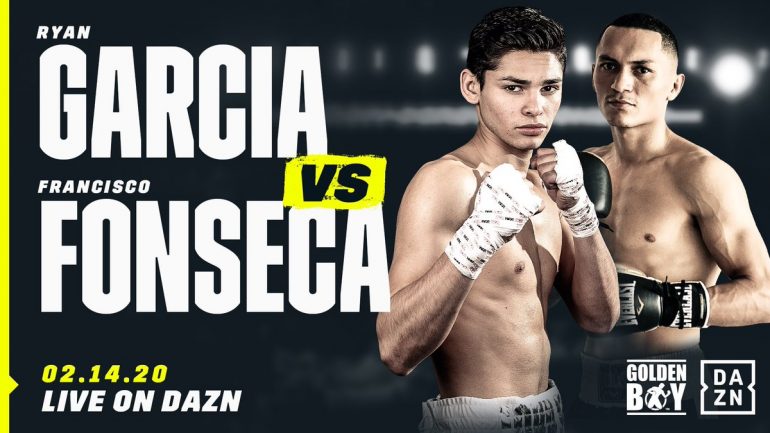 Unbeaten lightweight contender Ryan Garcia will square off against Francisco Fonseca on February 14, Golden Boy Promotions announced on Wednesday. The 12-round bout will take place at the Honda Center in Anaheim, California and will stream live on DAZN.

Garcia (19-0, 16 knockouts), who is ranked No. 6 by The Ring, is coming off a first-round knockout victory over fringe contender Romero Duno in November. The victory capped a contentious 2019 between Garcia and his promoter, Golden Boy. Both sides settled their differences after Garcia signed a lucrative contract extension with the promotional company in September.

Oscar De La Hoya believes the 21-year-old Garcia has all the tools to be the next superstar in the sport, especially because he can draw a younger demographic, including teenage girls and women.

“Golden Boy is proud to present the biggest rising talent in the sport of boxing,” said De La Hoya, who is the Chairman and CEO of Golden Boy. “Ryan Garcia silenced all the skeptics by knocking out a tough contender in Romero Duno, and he did it in just one spectacular round. Aside from being a popular young star who is loved by all women, he’s also demonstrated that he’s a skillful fighter with power in both hands.”

Garcia has also benefited from Eddy Reynoso, who has trained him for over a year. He has also trained alongside Canelo Alvarez in the San Diego area. He hopes to land a significant fight later this year against a top contender.

“I’m very excited to be in the ring once again,” said Garcia, who grew up in nearby Victorville. “I’m looking to shock the world this year. I’m going to show the boxing world that I’m here forever!”

Fonseca (25-2-2, 19 KOs) last fought in November in London, fighting to a majority-decision draw against once-beaten Alex Dilmaghani. He is unbeaten in his last four bouts since losing by unanimous decision to IBF junior lightweight titleholder Tevin Farmer in December 2018.

Fonseca’s other loss as a pro was at the hands of Gervonta Davis in August 2017. The 25-year-old from Managua, Nicaragua is confident he has the tools to pull off an upset and defeat Garcia.

“Nicaraguan boxing is a the very top right now because we have two world champions representing us right now,” said Fonseca. “That’s why I will not let my country down. When I face Ryan Garcia, I will expose him on his own territory, and I will deliver him his first professional (loss). My manager Rosendo Alvarez and I have been waiting for. We’ve dreamed of fighting Ryan Garcia, and we have the antidote to defeat him.”

In the co-feature, three-division titleholder Jorge Linares will fight an opponent to be determined in a 12-round lightweight bout.

Linares (46-5, 28 KOs), who is originally from Venezuela and now resides in Las Vegas, dropped Al Toyogon once en route to a unanimous decision victory in his last bout in September in Tokyo.

In his previous fight, last January, the 34-year-old former lightweight champ was knocked out by Pablo Cesar Cano in the opening round in a stunning upset. Word is Linares, should he win on Feb. 14, could fight Garcia later this year.

Undefeated welterweight Alexis Rocha (15-0, 10 KOs), who is from nearby Santa Ana and is the younger brother of junior featherweight contender Ronny Rios, will fight in a 10-round bout.

Flamboyant welterweight Blair Cobbs (13-0, 9 KOs) will also fight on the card in a 10-round bout.