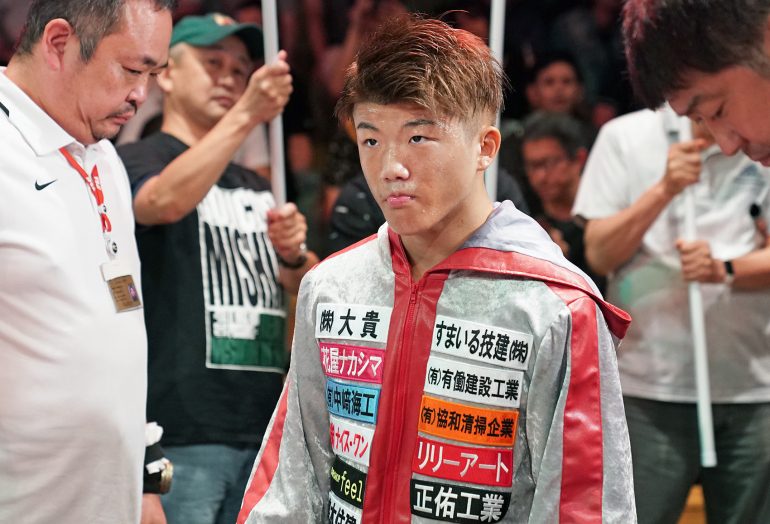 Best night of pro career and why: Shigeoka is most pleased with his last outing when he demolished his opponent with a debilitating body shot.

“I have demonstrated good boxing in the professional ring so far,” Shigeoka told The Ring through Hank Hakoda. “If I had to pick the best one, it would have to be the win over Clyde Azarcon. I was in a really good condition with smooth weight control, which fully enabled me to move well.”

Worst night of pro career and why: Shigeoka feels he wasn’t at his best when he met Joel Lino back in April.

“Without doubt, I was disappointed with my performance in my third showdown against Joel Lino in Kumamoto,” he said. “I was unable to knock him out and I even took some unnecessary shots from him.

“I could not show my best form because I was nervous and caught up in the mood of my homecoming bout. I missed a KO victory and did not meet my home fans expectations. At the same time, I got a very good lesson, on the worst night at least.”

Next Fight: As part of a world title triple-header, Shigeoka will take a big step up in class when he faces big-punching Rey Loreto at the Ota City General Gymnasium in Tokyo on Tuesday.

The diminutive southpaw admits he hasn’t watched Loreto but is confident of turning back his toughest challenge to date.

“All I know about him is that he is a southpaw with a good reputation,” Shigeoka explained. “I am good at fighting southpaws and I look forward to facing him. I do not think it is going to be a difficult fight. I would rather focus on making a good preparation to show my own boxing.”

Loreto turned professional in 2008. He lost his first four professional bouts and was heading toward journeyman status with a record of 8-10. However, his form soon picked up and he scored a brace of stoppage wins over former IBF 105-pound titleholder Nkosinathi Joyi.

A seven-fight win streak saw him rewarded with a title shot at WBA titlist Knockout CP Freshmart in July 2017. He put up a solid effort but dropped a unanimous decision.

The 29-year-old has returned with two wins and although he’s 25-14 (17 KOs), Loreto remains a tough gatekeeper. He’s only been stopped once and we should find out just how good the young Japanese fighter is right now. 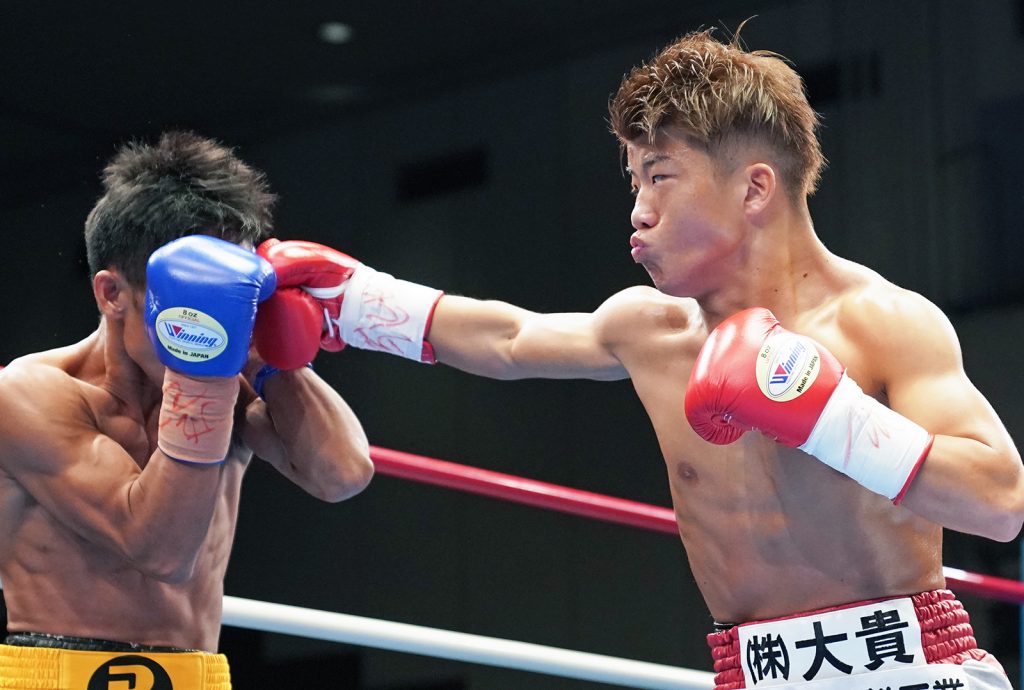 Why he’s a prospect: Shigeoka was a top amateur domestically, winning five national titles, including two Inter-High School Championships when he was a student in Kumamoto. He fought in the pinweight division (44-46 kilograms)

He lost just once in his amateur career but it wasn’t a conventional loss. The defeat came against his elder brother, Yudai, in the final of the Kumamoto prefecture final. Both brothers, their father and their coach agreed that the bout should not take place and it was decided that Ginjiro would not fight. As soon as the opening bell rang his corner threw in the towel.

During his amateur days he enjoyed a rivalry with Ryusei Matsumoto.

“My best opponent was Matsumoto of Nihon University,” Shigeoka said. “I fought him three times and won all by decisions, but he was still a remarkable fighter for me. He amazed me by the way he won in some of his bouts against other fighters. I have some other favorite fighters who are still fighting in the amateurs.”

Shigeoka has sparred a handful of world champions and top contenders in Japan that have helped him improve.

“I used to spar with (two-weight world titleholder) Hiroto Kyoguchi and now I do a lot with good southpaws Masataka Taniguchi and Shisui Kawabata because my next opponent is southpaw,” Shigeoka revealed. “I go mainly to Misako Gym to spar. I have sparred with WBC light flyweight titlist Kenshiro Teraji twice, four or five rounds each time.”

The 20-year-old openly admits that Teraji got the better of him in their spar: “Kenshiro beat me badly in the sparring sessions [laughs].”

Shigeoka decided against trying to win a berth on the Japanese team for the 2020 Olympics and turned professional in September 2018.

“I did not hesitate to turn pro at all,” he said. “It was partially because there would be no more light flyweight competition in the Olympics, but I have been professionally oriented from the beginning. I always wanted to fight as a professional and become a world champion.”

Shigeoka signed with the powerful Watanabe Gym for a couple of reasons.

“They scouted me,” he explained. “Also, my brother, Yudai, often visited Watanabe Gym for sparring sessions when he was in Takushoku university and told me the atmosphere was very good and there were many fighters in lighter weight categories.”

The youngster appears to be very talented and is confident that he can win a world title in the future.

“I have big advantages in speed, power, technique and accuracy, along with my good sense of landing punches,” Shigeoka said of his arsenal. “My biggest strength lies in my fast stepping to close the gap on an opponent.”

His trainer, Machida, concurs with his star pupil and also highlighted his outstanding ability in the area of counter punching.

“I put emphasis on throwing jabs and body shots in our pad training,” said the trainer.

Hitoshi Watanabe says he just needs to help his fighter gain experience and he’ll be a champion for the long haul.

“From the first time I met him, he already had the intense aura of a fighter,” said the promoter. “His comprehensive boxing ability is already established.

“After the next bout, I’ll consider a couple more fights for him before moving on to his first world title encounter. I would rather give him experience than try to make him a champion too soon. I think the Rey Loreto bout will be a very good opportunity for him to feel Loreto’s rich world-class experience.

“Before his world title challenge, I want him to build more advanced physical strength and skills, so that he can hold his own in a 12-round fight. He has to be ready for a struggle in which strategy comes into play. We will not hesitate to even go abroad to fight a world title match.”

All the while Shigeoka listened to his master before piping up: “I am ready to fight a world champion anytime, Mr. Watanabe.” 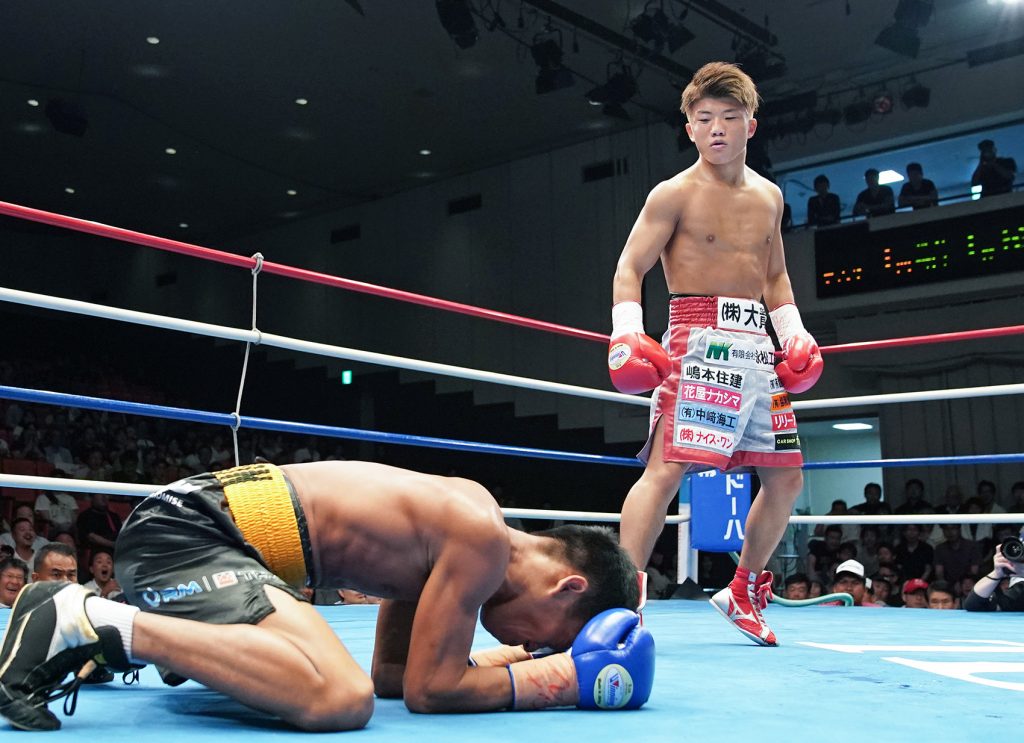 Why he’s a suspect: Shigeoka ticks all the boxes and looks like he could be the next top drawer Japanese fighter to follow in the illustrious footsteps of Naoya Inoue, Kazuto Ioka, Ken Shiro and Hiroto Kyoguchi.

It’s still early, however, and while his ability is undeniable, we need to see how the young prospect responds to adversity. He will gain invaluable experience against Loreto that should set him in good stead for the future.

“I do not need major changes or improvement in my overall boxing skills,” Shigeoka said. “However, I have no experience fighting 12 rounds. I would like to develop tactical skills so that I can confidently fight to a game plan. I am planning to do 12-round sparring sessions three or four times for the next bout.”

Machida, who began training Shigeoka in January, is working on those aspects so that it becomes instinctive.

Storylines: Shigeoka was born in Kumamoto, in the south of Japan before moving to Tokyo in April 2018.

He is the third of four children, and his parents still live in Kumamoto where they own a painting business.

“I first started karate when I was in kindergarten although I liked watching boxing on TV,” said Shigeoka of his introduction to combat sports. “I started boxing at Honda Fitness Boxing Gym at 10 and continued karate until 12 when my father recommended that I focus (solely) on boxing.”

The young fighter has lofty goals.

“I would like to break the national record of 13 world title defenses that Yoko Gushiken made,” Shigeoka said. “My goal in boxing is to defend a strawweight world title 20 times and retire without losing. Hopefully, I will earn the money necessary to retire (and be happy) for the rest of my life.”

His time away from the ring is spent diligently working towards his future success.

“Roadwork, sleep, gym workout, sleep, repeat,” laughed Shigeoka. “I sleep a lot before and after my training. I do not really do anything other than boxing. On Sundays, I go shopping. I live in a gym dormitory and always sleep until noon.”

Our correspondent Hank Hakoda helped co-ordinate and translate this feature. The Ring appreciates his assistance.