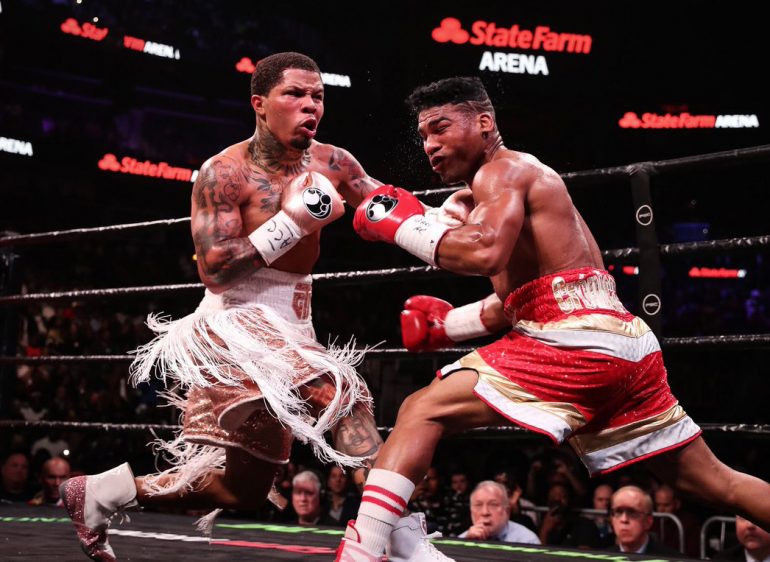 ATLANTA – It was much more difficult and took longer than expected, but Gervonta Davis scored an 12th-round TKO win over Yuriorkis Gamboa at State Farm Arena on Saturday.

Davis-Gamboa headlined a tripleheader that was broadcast live on Showtime Championship Boxing.

Although Davis is from Baltimore, he owns a second home in Atlanta and has wanted to bring a fight here for some time. An announced attendance of 14,129 filled the arena to watch “Tank” make his lightweight debut against the decorated Cuba native.

Davis, a southpaw, looked sharp from the opening bell, landing several lead lefts that backed Gamboa up. The 38-yar-old Cuban veteran who now lives and trains out of Miami appeared surprised at Tank’s hand speed. Davis stalked forward in the second round, sticking jabs upstairs and downstairs with pinpoint accuracy. A short, chopping left hand dropped Gamboa. The veteran rose to his feet but appeared injured. He would later claim that he tore a tendon in his right ankle.

Gamboa looked better in the third, landing a couple decent shots that got Tank’s attention. But the youngster from Baltimore kept stalking forward, scoring with combinations and clearly taking the round. The fourth round was slightly more competitive, and Gamboa landed a good right hand in the opening seconds of the fifth. That’s when Davis opened up, scoring with several hard uppercuts and hooks on the inside that popped Gamboa’s head back. Surprisingly, the veteran took the shots well and fought back, landing several punches of his own.

Davis fought at a more measured pace in the sixth, continuing to control the distance and push his opponent back. Gamboa had his best round in the seventh, landing with rights and lefts that actually had Davis holding on for a brief moment. Suddenly it was a different fight and the Cuban was having little moments here and there. Just when things were getting a bit anxious for Tank, he exploded with a flush right hook followed up with a left hand that dropped Gamboa. Once more he rose to his feet, but was on very unsteady legs.

It felt as though Gamboa’s corner may throw in the towel before the start of the ninth but they sent him out, and he fought well. Davis had to be discouraged, having landed so many hard punches yet not being able to stop his much older foe. In fact, Gamboa landed a three-punch combo toward the end of the tenth that snapped Tank’s head back. The crowd began to boo Davis looked lethargic, sloppy and even confused at times in the eleventh, until he rallied with an explosive combination that staged Gamboa just before the bell. 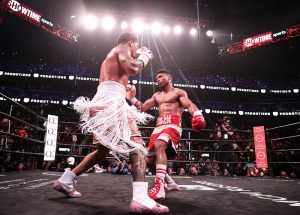 Davis scored a fight-ending knockdown in the final round. Photo / @ShowtimeBoxing

The final round opened with both men throwing combinations. Davis was looking for the stoppage in a big way, landing several left uppercuts that visibly hurt Gamboa. Finally, another monster left dropped him for good, prompting referee Jack Reiss to immediately call off the fight. Davis improved to 23-0 (22 KOs) with the stoppage, while Gamboa fell to 30-3 (18 KOs).

Although it was an exciting win for Davis, beating Gamboa at this stage doesn’t prove much. The Cuban’s best years were as a featherweight almost a decade ago, and he hasn’t faced an elite-level opponent since he was stopped by Terence Crawford in the ninth round of their 2014 lightweight title bout. Davis landed everything but the kitchen sink on Gamboa and yet the faded veteran was nearly able to take him the distance, exposing some defensive liabilities in the process.

To his credit, Tank admitted he still has much to learn. “I believe my performance tonight was a C-plus,” he said. “It was a great experience.  I’m only 25 years old.  I’m learning each and every day. 2020 will be a big year.” When asked about potential fights with Vasiliy Lomachenko and Leo Santa Cruz Dais responded, “bring them on.”

While it is highly unlikely that promoter Floyd Mayweather won’t let Tank within a mile of Lomachenko, the Santa Cruz fight is a real possibility.