Gervonta Davis’ ‘It’ factor: The driving elements contributing to his magnetic appeal 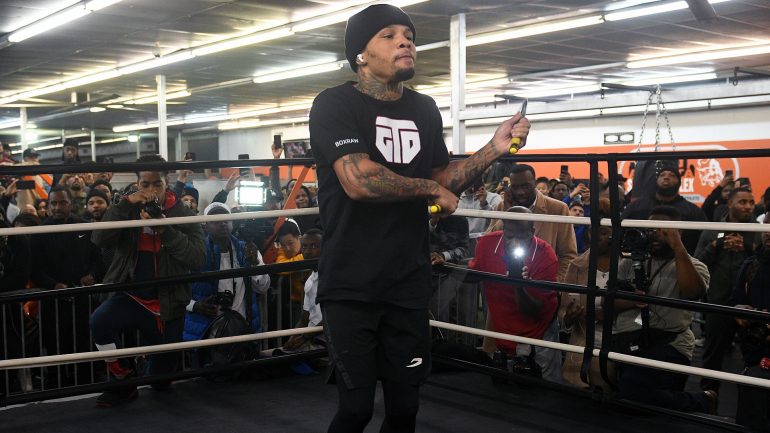 Gervonta Davis is known as “Tank,” but if you’ve been paying attention, you’ll have noticed how “#TheONE” is another nickname that he has been pounding into existence.

In a boxing world of boast and bravado, there’s actually numerical truth toward Davis fitting that hashtag. At 22-0 with 21 knockouts, Davis’ knockout ratio stands at a staggering 95 percent clip. And that’s just the beginning.

As if those numbers weren’t gaudy enough, Davis’ popularity seemingly grows with each fight — his 2.1 million social media followers (Instagram and Twitter combined) offer just a snapshot of how he’s easily one of the most popular boxers today.

Stephen Espinoza, Showtime’s president of sports and events, informed the media during a recent conference call how much of a draw the 25-year-old Davis has become. Davis’ fight against Gamboa marks the first world championship boxing event in Atlanta in upwards of 20 years. The last time there was a world title fight in ATL? Evander Holyfield against Vaughn Bean back in September of 1998, spelling that “Tank” is being asked to shoulder the load of reigniting a market in the midst of the holidays. Davis has been doing just that.

“We expect a sellout or something very close on Dec. 28, which will mean that over three different cities on three different dates and three fights this year, Gervonta will have sold well over 30,000 tickets, including over 8,000 in Carson, Calif., against a last-minute opponent,” Espinoza said. “At Royal Farms in Baltimore (on July 27), a sellout crowd of nearly 15,000, and State Farm Arena in Atlanta, ticket sales are going very, very well.

“So with well over 30,000 seats sold among three fights in 2019, that puts Gervonta at the top of the list, along with Errol Spence and Anthony Joshua in terms of the boxers who have sold the most tickets across events in 2019.”

The fact that Davis has survived and thrived on his own is astounding.

With his father in prison and mother addicted to drugs, a then-five-year-old Davis was removed from her custody by child protective services. Those are the odds that Davis had to overcome to merely escape Baltimore, let alone become a boxing sensation with a movie-like life whose star power only increasing.

But what is it about Davis’ “It” factor that contributes to his magnetic appeal in and out of the ring?

Sporting News went searching for answers, speaking with Davis himself, Espinoza, Leonard Ellerbe (the CEO of Mayweather Promotions), Calvin Ford (Davis’ longtime trainer) and rapper Casanova 2X, who led “Tank” out to what was a second-round TKO destruction of Ricardo Nunez back in July.

Here are all the elements that lend more credence to Davis actually being “#TheONE.”

Davis in the early years

Ford: “Tank” didn’t really grow. He was always short and compact since he was little. When me and “Tank” got together, it was like we were always running, always doing stuff together. He understood the goals, he understood the division, he understood what he had to do. …

Anyone we put up against him, he would try to make sure he outworked him. He was consistent with it.

When Ford knew Davis was special

Ford: We used to watch Emanuel Augustus, how he used to dance in the ring. He never watched Manny Augustus. I was watching him, messing around. He had a tournament in North Carolina at the JO (Junior Olympics) and he danced in the ring and punched the kid. It looked like an Emanuel Augustus-type and I wondered if he looked at [the Augustus footage].

I always knew he had power. It was just him developing it and knowing how to use the power coming out of the amateurs. He’s a great student of the game.

Casanova 2X: Gervonta’s a beast. Mike Tyson was a beast — a hunter, never the prey. That’s what Gervonta does — hunt them down. Last 10 fights, I’ve been watching and it’s the same result. … huntin’ them down.

Ellerbe: When it comes to “Tank,” especially in the urban markets, which is carried over into other markets now, he represents what the fans like, this generation of fans want to see.

They want to see knockouts, and that’s what “Tank” believes in, and when he comes to the ring, his sole mentality is, “I’m not going to play with you if you don’t belong in there with me.” With him, he’s going to run you out of that ring.

Ford: Actually, my nephew drew a picture of “Tank” and the crowd was in the background and it looked like he was throwing a punch like he was Superman. In the last fight that “Tank” had, it was the same picture that was [photographed of Davis vs. Nunez] from the one 10 years ago.

I showed “Tank” that shot and the picture that was done 10 years ago and he was like, “Yooo! That’s crazy!”

My nephew drew this picture of Tank ten years ago

Ford: When he was little, the kids loved him. “Can I get a picture of you?” This is before he even became a pro.

Davis: I believe, just in the ring, I’m explosive. I’m a great fighter all around the board. Outside the ring, I’m not a mean guy. I’m a likeable guy. I’m reachable, to my people. So, I believe I’m just overall a great person. I believe that, and people see that.

Some might, see me on Instagram or Twitter and think otherwise, but when you really get to know me, I’m a likable guy. So that’s why I think that people are drawn to me.

Casanova 2X: I think everybody could relate to his story more than the happy boxer that’s been pampered and spoiled. Everybody from the hood can relate. And I think, he gets out more. He’s a beast. I respect where he comes from. I respect his struggle. Going through everything we go through in the streets, it’s hard to make it out.

Davis: I have a big impact on the youth. I’m just 25. I just turned 25, and I’m doing well for myself. And again, I’m reachable. It’s not only like they can see me on Instagram or TV or anything.

But I’m actually in Baltimore City where I’m from, and I’m around other fights in other cities, and you can come up to me and take pictures and things like that.

When Floyd [Mayweather Jr.] was coming up, when he was younger, he was doing well for himself and he was in the area like me. So, it’s better than, being reachable, than just seeing somebody that’s going to work [for himself] like a star, just on TV. When you see them on TV, you see them. But when you actually get near them and feel them and be face to face with them, it’s more enjoyable.

Espinoza: What people love about Gamboa when he burst on the scene is the same thing as people love about “Tank” Davis, and that is their ferocious style inside the ring; the knockout power, the flashiness, the showmanship.

Ellerbe: He has the “It” factor. It’s different, from a boxing standpoint, because we don’t see many stars in our sport that bring that to the table, and that’s what makes him very, very exciting and makes him the most exciting young star in the entire sport.

Casanova 2X: Every time, it’s a show. Like every time. Just being there is epic. I definitely think that everybody be like, “Yo, Gervonta’s fighting. Where’s the TV? Stop right here.” If they’re not there, they’re watching on their TV. Definitely.

Ellerbe: When you came into the arena and you were coming to see a Mike Tyson or Gervonta Davis, you couldn’t get up out of your seat to go to the restroom or go get some popcorn and a drink, because the fight might be over.

What’s next for Davis?

Ford: He’s still finding his way through all the success right now. Once he does what he’s supposed to do with this job in front of him, his legacy will start walking because that’s when all the big names will start coming in. Right now, where I see “Tank” at is he’s like a rolling ball that’s going to make his mark in the sand.

He’s trying to figure it out as a young man. Time will tell. We’ll see what kind of champion he’s going to be for the ages.