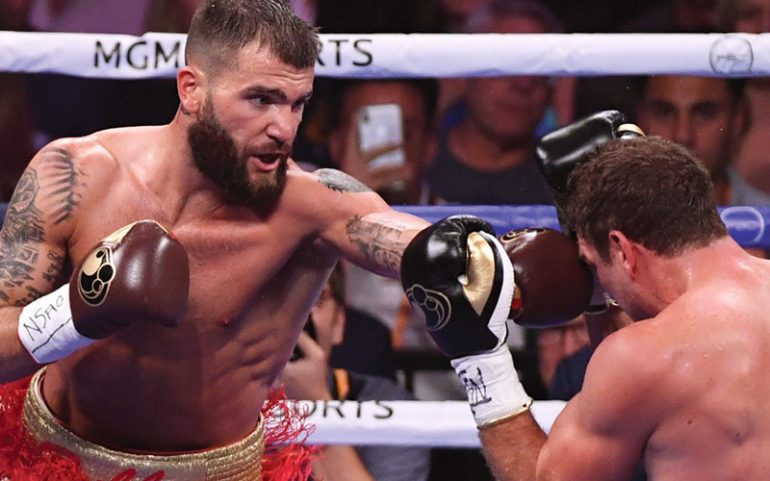 LAS VEGAS, NEVADA - JULY 20: Caleb Plant (left) throws a left at Mike Lee in the third round of their IBF super middleweight title fight at MGM Grand Garden Arena on July 20, 2019 in Las Vegas, Nevada. Plant retained his title with a third round TKO. (Photo by Ethan Miller/Getty Images)
24
Dec
by Francisco Salazar

Caleb Plant will defend his IBF super middleweight title against Germany’s Vincent Feigenbutz on February 15. The 12-round bout will take place at the Bridgestone Arena in Nashville, Tennessee and will air live on FOX (8 p.m. ET/ 5 p.m. PT).

Plant, who is rated No. 3 by The Ring at 168 pounds, grew up in the Nashville area and has always wanted to defend a world title belt in his hometown.

The 27-year-old captured the IBF belt by dropping Jose Uzcategui twice en route to a unanimous decision win in January. He has defended once, in July, dropping Mike Lee multiple times before the fight was stopped in Round 3

Even though he currently lives and trains in the Las Vegas suburb of Henderson, Plant maintains close relationships with family and friends in Nashville.

“I’m very excited to bring my world title home to Nashville in my second defense,” said Plant, who dedicated his win over Uzcategui to his late daughter, Alia. “It’ll be in front of all my family and friends, and I plan to put on a spectacular performance.

“Vincent Feigenbutz is a very tough, rugged European fighter. He’s got a big knockout ratio, but this is in my backyard and I will not let any man come in here and rain on my parade. On February 15, I’m representing my hometown and my home city with pride. I believe this will be the first of many fights that we hold at The Bridgestone in Nashville. This fight isn’t going 12 rounds.”

In his most recent bout, Feigenbutz (31-2, 28 KOs), who resides in Karlsruhe, Germany, scored an eighth-round knockout over the previously unbeaten Cesar Nunez in August. The 24-year-old has won his last 10 fights since suffering a knockout loss to Giovanni de Carolis in January 2016.

The Plant bout will be his third appearance in the U.S. and Feigenbutz is drawing inspiration from fellow German Max Schmeling.

“I am not going there to lose,” said the challenger, who made his pro debut almost three months after his 16th birthday. “I am coming over to become only the second (German) boxer, after the legendary Max Schmeling, to win the world title in the U.S. (Schmeling defeated Jack Sharkey via DQ in 1930 to win the vacant title) and bring the belt back home to Germany. I hope everyone in my home country will have my back and support me on this journey.

“For me, Plant is the strongest of all super middleweight world champions. We are the underdog, but we won’t make it as easy for Caleb, like in his last fight. We know how difficult a fight on American soil is, so there is only one strategy – get the knockout!”

On the undercard, Bryant Perrella and Abel Ramos meet in a 10-round welterweight bout.