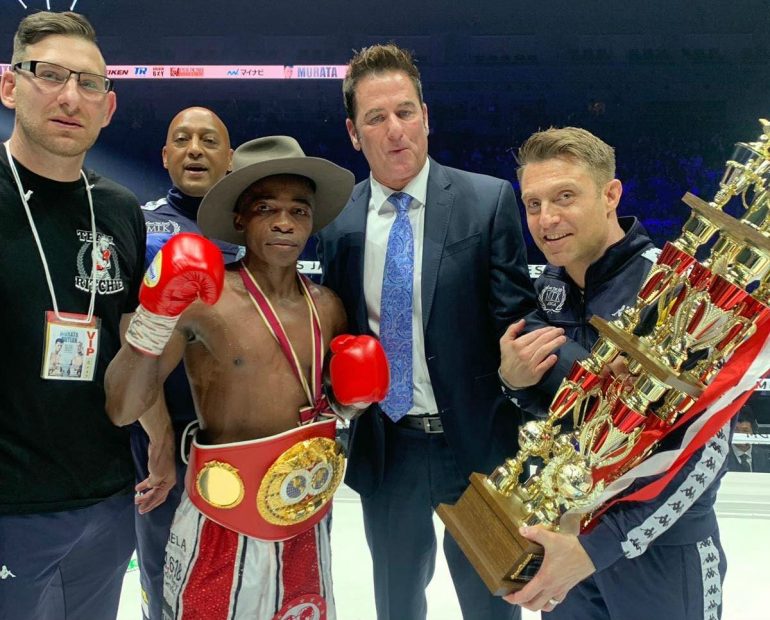 “It’s not easy to fight at your opponent’s home,” said the South African globetrotter Mthalane (39-2, 26 knockouts). “But fighting in Japan is good.”

It was one of the best performances of Mthalane’s career, which began in 2000 and includes stoppage wins over John Riel Casimero and Zolani Tete. The back-and-forth action turned for good in the eighth, when a left hook to the body knocked the wind out of Yaegashi, leaving him vulnerable to the power punches upstairs. The fight was finally stopped the following round.

“I think the fight could have even been stopped before,” added manager/trainer Colin Nathan of MTK Africa. “The last two rounds [Yaegashi] just took a battering.”

The 37-year-old hopes to land a unification showdown with either WBO titleholder Kosei Tanaka or WBC titleholder Julio Cesar Martinez in 2020.

“I will be happy if I can fight Tanaka or Martinez,” said Mthalane, who is in his second reign with the IBF belt that he never lost in the ring.

Martinez (15-1, 12 KOs) picked up the vacant WBC title last week with a ninth round stoppage of Cristofer Rosales on the Jacobs-Chavez Jr. card in Arizona. He won the belt which Charlie Edwards, whom Mthalane had been seeking a fight with, had vacated.

A showdown with Tanaka (14-0, 8 KOs) would mean a fourth straight fight against a Japanese opponent, if it happens next. With Tanaka, 24, rated no. 1 by RING and Mthalane at no. 2, it would also fill a RING championship vacancy, and it’d be the biggest fight for Mthalane to make at 112 pounds from a business standpoint as well.

“There’s talk of a unification, there’s talk of coming back here [to Japan]. I don’t want to preempt anything, and I certainly don’t want to jump the gun,” added Nathan, who says Mthalane will likely return to the ring in April or May. He says Mthalane’s longevity is due to him having no vices outside the ring, like drinking, smoking or a poor diet, and says he’ll stay active at the Hot Box Gym in Johannesburg, South Africa, sparring other fighters to remain sharp.

“We want to enjoy this moment as Moruti’s career could potentially head on to [the International Boxing Hall of Fame] one day when it’s finished.”

But Mthalane isn’t finished any time soon, he says.

“I don’t know how long I will go, I will see. When the right time comes to retire, I will retire. But at the moment I’m still feeling very fresh,” said Mthalane.

Mthalane’s profile is on the rise at home, as well. He was named South Africa’s Sportsman of the Year last month, beating out multiple-time Olympic medalist Chad le Clos to become the first boxer to earn that distinction.

He also closes out the year not only as South Africa’s only boxing world champion, but also the only current champion on the continent of Africa.

Ryan Songalia is a member of the Boxing Writers Association of America and part of the Craig Newmark Graduate School of Journalism Class of 2020. He can be reached at ry[email protected]