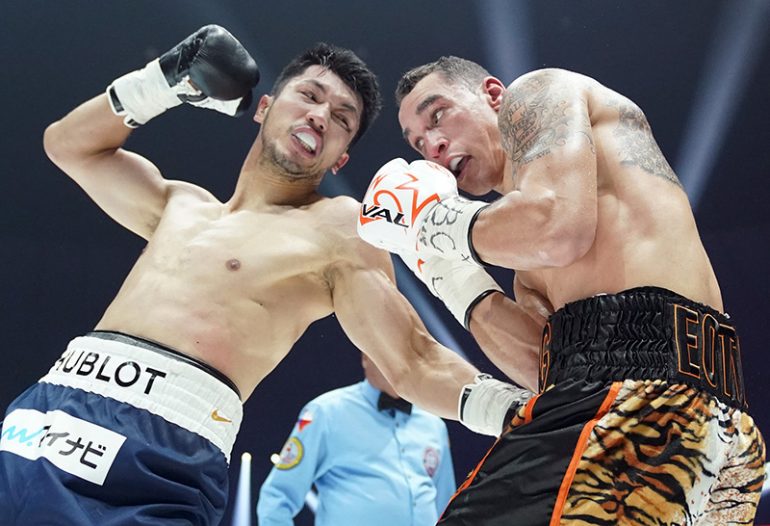 Ryota Murata was last seen in the ring vs. Steven Butler, who he broke down in five rounds. Photo by Naoki Fukuda
23
Dec
by Ryan Songalia

Ryota Murata closed a big 2019 with another strong performance in front of his home country, stopping Steven Butler in five rounds Monday at the Arena in Yokohama, Japan.

The finish came at the 2:45 mark, as a series of right hands, cleaned up by a left hook, sent the Canadian Butler crashing to the canvas, where referee Rafael Ramos stopped it without a count.

Butler had come out strong in the first two rounds, using a busy pace to keep the harder-punching Murata occupied, but that plan began to unravel in the third, when a straight right to the body hurt Butler, and left him open to three right hands in a row as the bell approached.

Murata (16-2, 13 knockouts), a 2012 Olympic gold medalist, proved to be the more seasoned fighter as the rounds progressed, cutting down the ring and hammering Butler (28-2-1, 24 KOs) at close quarters, landing to the midsection as Butler tried to sneak in uppercuts. 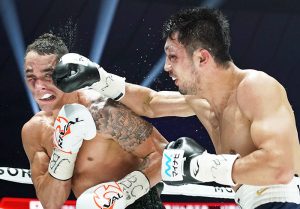 The biggest weapon continued to be the right hand of Murata, chopping down on the ear of Butler whenever he leaned in. One of them, early in the fifth, nearly made Butler touch the canvas with his gloves. Moments later, Murata brought the punch through the guard, landing on Butler’s chin and hurting him badly. With the snap coming out of Butler’s punches, it was just a matter of time before Murata closed the show.

Murata, 33, scored his second big KO of the past five months, having stopped Rob Brant in two rounds in Osaka this past July to avenge a 2018 defeat.

The middleweight bout headlined a card, which was co-promoted by Teiken Promotions and Top Rank, and televised in the U.S. on ESPN+.

A 1-2-1 combo backed Yaegashi into the ropes, leaving him defenseless for the follow-up attack of Mthalane, leading to the referee stoppage.

Mthalane (39-2, 26 KOs) strengthened his claim as one of South Africa’s greatest fighters, while Yaegashi (28-7, 16 KOs), a former three-division champion, may have hit the end of the road in his career at age 36.