The countdown To Tokyo: Yes, sir, Keyshawn Davis is gunning for gold 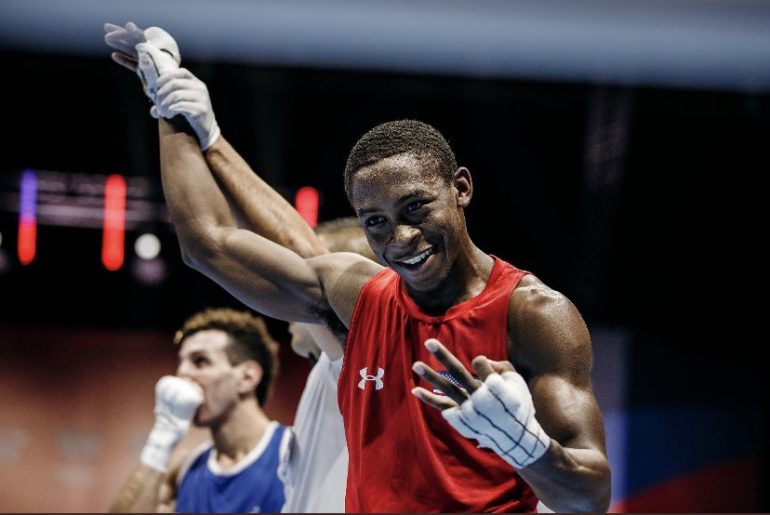 The first takeaway in talking to Olympic hopeful – and possibly maybe the best chance for Team U.S.A. to grab gold in Tokyo – Keyshawn Davis is: Gotta give credit to his mom.

I was on the line with the 20-year-old Davis, who won at 138 pounds in the Olympic Team Trials week, which finished in Louisiana, on December 14, and I heard him tell me a tidbit of his history or future plans and he’d drop in a “Yes, sir.”

And when the Norfolk, Virginia resident told me he has a little brother who boxes and a big brother also gunning for an Olympic slot, I tipped my cap again to his mom.

Wanda Davis teaches grade school in that neck of the Norfolk woods and Keyshawn gives her heavy credit for being a rock and encouraging the boys to pursue athletic dreams. It sounds like some of those boxing skills were formed before the boys hit that gym, when Keyshawn was about nine.

“My mom raised five of us, two sisters and three boys,” he told me Friday, “and the atmosphere at home was very aggressive,” football, basketball, baseball, then the boxing. The Davis boys were always running, jumping, hitting.

In 2008, Keyshawn at nine, Kelvin at 11 and Keyon at age seven went to a gym, up the street from their house, and it was like ducks to water. Keyshawn said it was because skills were honed between him and Kelvin, in some of those brotherly spats that can get furious fast…but always end up with a return to form, that of loving but rambunctious boys bonded by a role model mom who worked her butt off to provide but also was – and is – present in all elements of the kids’ lives.

Hey, does Keyshawn remember that first punch he absorbed, that first crackerjack launch that maybe bonked his nose and made him wince?

“Yes, sir,” the fighter said. “It was thrown by my older brother, so going to the gym, it was nothing new to me.”

And he said he knew, like pretty much right away, that he’d be making long strides. He’d succeed in that ring. Davis made it to the final in the Ringside tournament, at age nine, and though he didn’t win, he had an inkling he could get really good at pugilism, “The guy had more experience than me but my will had me throwing a lot of punches. Long story short, I didn’t get the win and that hurt so bad…but I wouldn’t leave the sport. I said, ‘This sport is for me.'”

He’d picture in his mind, daydreaming, about performing magical feats in front of crowds. “I had my eye on the Olympics since I was seven,” he said. Track was actually his field of dreams at first but, pretty quickly, he knew that boxing was his first love. Since about 2016, Davis trained his eyes on Tokyo, on winning a berth on the squad. In Louisiana, he made another stride toward that desired goal.

However…there are other steps to take…Fighters take part in a Colorado Springs training camp to prepare for International competition in Bulgaria, from January 17 to 26, 2020. The Team U.S.A. bosses then announce the 13 boxers who will take part in a qualifying tourney, in Argentina, from March 26 to April 3.

In that tournament, boxers will have to finish among the top fighters in their particular division. If not, they will get another chance in the final qualifier, in May, that takes place in France.

Davis, the reigning world silver medalist and top seed in his class among the male elites, showed, in Lake Charles, that he is dialed in to keep snagging wins. He won the final in a walkover over No. 3 seed Ernesto Mercado, of Pomona, California, who fell ill and couldn’t fight. He had decisioned Charlie Sheehy, Harley Mederos and Marcell Davidson, to get to the deciding scrap.

“In Louisiana, in the ring, I had a lot of fun. I did what I wanted to do in the ring, show my talent, skills and personality in the ring,” Davis said. “At this tournament, there was a lot of pressure. They made me the one to beat; everyone was watching…but the pressure only makes me better! I feel like I showed that.” 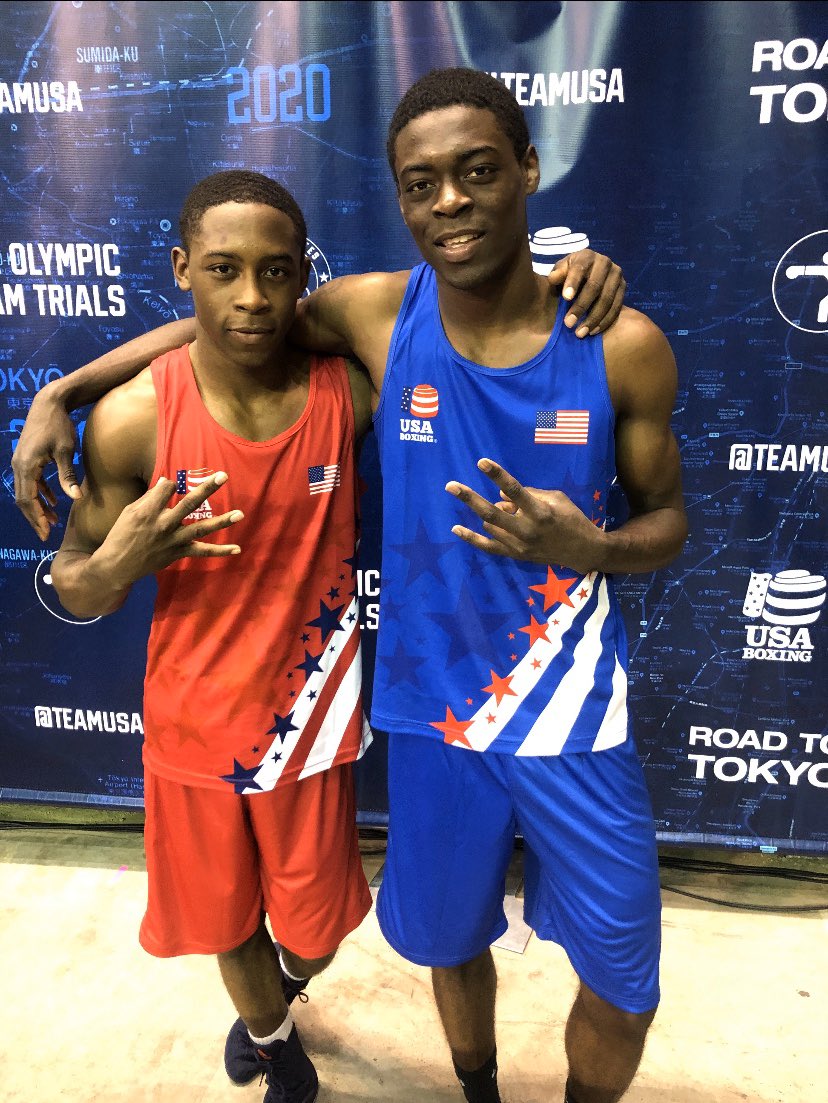 Another storyline to watch from Davis…his older brother Kelvin, a welterweight, is also gunning for a Tokyo slot. Ohio’s Delante Johnson (ranked No. 1 at 152 pounds coming in by U.S.A. Boxing) bested Kelvin (ranked No. 6), keeping him from the finals at the Trials.

Kelvin, partially joking, takes some credit for Keyshawn’s chops as a pugilist. “You sometimes gotta show the lil bro what you got,” he told me. No, but for real, there is no hint of sibling rivalry. “Every time we fight, we are there for each other. Then we break down with each other what else we could have done in the ring.”

Wait…Back to mom. How does Wanda handle all this…Kelvin and Keyshawn and youngest brother Keyon doing the boxing thing? Does she not dissolve into a puddle of worry?

“Nah,” Keyshawn said, “we’ve been doing it so long, it’s second nature to her now!”

I probed more; the kid does not come off as jerky-cocky. He told me he had no plans to lose in Bulgaria..or Argentina…or anywhere. “No, sir; definitely not!”

And his fighting style, what’s that all about? “I’m very aggressive,” Davis said. “Lot of jabs and my right hand, yes, sir!” OK, so he does have a finishing instinct? “Yeah, for sure; that right hand is a killer.”

People first started telling him they could see him winning gold back in 2016, Davis continued, and, “They started to realize this kid is for real.”

Keyshawn Davis @keyshawndavis1 ?? Nr.1 in the country sparring with TMT fighter @richardsonhitchins ??? Watch out for them ???? You will see both at the top in a few years✔️

Of course, there is a temptation to exit the amateurs and go for the purses. However, he said, people like Shakur Stevenson, who got that extra seasoning as an Olympian, told him to be patient, go for the Games and the gold.

Davis has a plan laid out in his head: Get that gold and then hit the professional ranks. He’s sparred high-grade people like Teofimo Lopez. In late April, he recalls, him and the new IBF 135-pound titlist traded leather. “It was a great sparring match; I learned a lot from Teofimo,” the Virginian said, “and now that he’s a world champion, it means even more.”

But first, getting to the first finishing line: Does he think he leaves Tokyo with a gold? “I’m positively gonna win a gold,” he asserted. “The hardest part is in the gym and staying focused.”

Well, helping America add to the all-time take of golds in boxing, now totaling 50, would make a nice segue into the pro ranks if he so desires. Does he? Yes, indeed, Davis said. Turning pro after Tokyo is on the to-do list. And would he aim for 135…or 140? “The deep waters, 135,” Davis said. OK, let’s continue this envisioning…Where does Davis see himself one, two years after turning pro? “Fighting Teofimo,” he said.

Is that plausible? After checking out film and listening to Keyshawn, my verdict is: