Julio Cesar Chavez Jr. retires in corner after fifth round against Daniel Jacobs 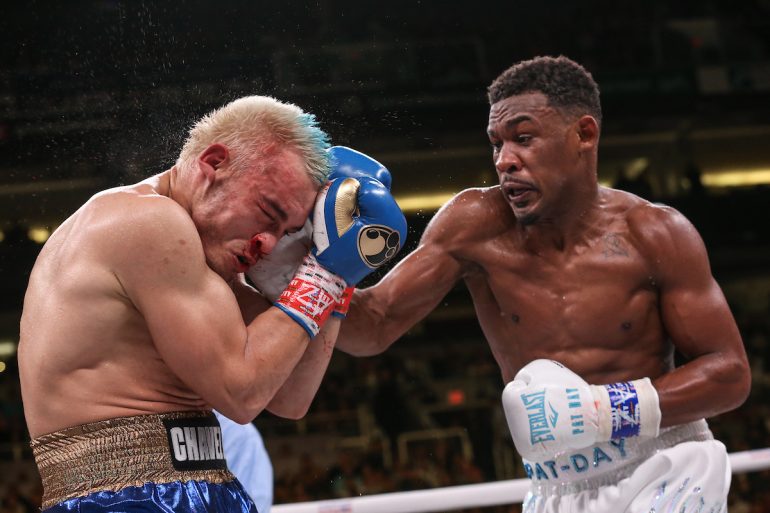 Standing at center ring, with a ring card being propped up to protect him from projectiles, Daniel Jacobs was as bewildered as he was exuberant: “They won’t let me enjoy my victory, baby!

“I’m from Brownsville, I never ran and I never will! But I’m gonna duck these beer cans.”

Jacobs (35-3, 29 knockouts) hoped to be able to celebrate his first stopped victory in over three years, but the means in which Julio Cesar Chavez Jr. fell to his fourth defeat overshadowed everything else on Saturday’s card at the Talking Stick Resort Arena in Phoenix, Ariz.

After a competitive first five rounds, Chavez Jr. remained in his corner, with conflicting reports of an injured hand coming from Chavez, and an injured nose, coming from his trainer Freddie Roach, according to the DAZN commentators.

Chavez Jr. and team sprinted from the ring back to the dressing room, using ring cards as shields to avoid beer cans which had been raining down since shortly after Chavez made the decision to not continue, the second time he had done so in his career, after he opted not to continue after round nine against Andrzej Fonfara in 2015, citing a knee injury following a knockdown.

The disappointment was compounded by the unprofessional way Chavez Jr. had comported himself prior to the fight, missing the super middleweight limit by nearly five pounds, for which he gave up $1 million of his reported $3 million purse, and missing a drug test in California, which necessitated moving the fight to the next state.

Jacobs, a 15-1 betting favorite, was rebounding from his loss to Saul “Canelo” Alvarez in May, and was working for the first time with Fareed Samad as head trainer after splitting with long-time coach Andre Rozier.

Prior to the stoppage, the son of Mexico’s most beloved fighter of recent times had been effective, even if it was mostly due to being a small cruiserweight in the ring.

Jacobs got his offense started in round two, using his left hand to jab and hook to the head and body.

Jacobs used his speed to shoeshine to the body of Chavez (51-3-1, 33 KOs), counting on Chavez to get impatient after missing punches. The fight took off in round five, when Chavez began the stanza by landing a flush right hand to Jacobs’ face. Jacobs took the punch, and then landed his own right that drew blood from the corner of Chavez’s left eye.

Jacobs, 32, says he took the first few rounds to get acclimated to the punches from his bigger opponent, leery of what surprises the 33-year-old Chavez Jr. had up his sleeve.

“To me he was a cruiserweight, even his jab was heavy,” said Jacobs, a former IBF middleweight titleholder, who dedicated the fight to his friend and former sparring partner Patrick Day, who died earlier in the year from injuries suffered in the ring.

Jacobs, despite moving into the 168-pound division, said that Jermall Charlo and a rematch with Gennadiy Golovkin remain at the top of his wishlist, but that he was open to facing super middleweights like Callum Smith, the RING champion of the division, or WBO titleholder Billy Joe Saunders.

“I want to move forward and prove that I’m the best,” said Jacobs.

DAZN commentator Sergio Mora, who was the last fighter Jacobs had stopped before, was cutting in his criticism of Chavez Jr., responding to broadcast partner Brian Kenny’s words regarding Chavez Jr.’s continued second chances.

“They keep enabling Chavez Jr. because he brings out the fans. They give him chance after chance, they pay him millions of dollars when he doesn’t deserve it with performances like that,” said Mora.

Earlier in the night, Julio Cesar Martinez (15-1, 12 KOs) claimed the vacant WBC flyweight title, stopping former titleholder Cristofer Rosales (29-5, 20 KOs) at 1:19 of round nine. Martinez had appeared on his way to winning the belt in his previous fight, after originally being announced the third round knockout winner over Charlie Edwards, before the decision was changed to a no contest because Edwards had been hit to the body when he was on the canvas.