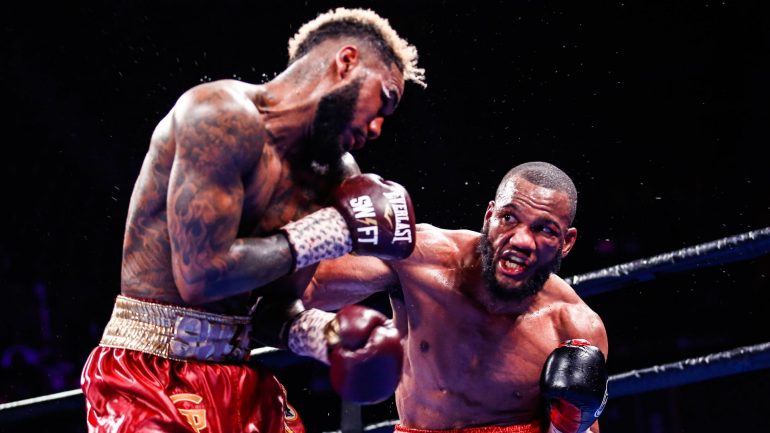 This was a great year for boxing, with more big fights and unexpected, but very welcome, sleeper hits. I was curious which fights you are considering for your personal Fight of the Year. These don’t necessarily have to be the same as the ones in The Ring. For me it’s kind of a 1A 1B situation, with 1A being Inoue Donaire and 1B being J-Rock Willams-Jarrett Hurd. Both were special, gripping, exceptional fights, and I think the final of the WBSS Bantamweight edges it, but for me part of what made the J-Rock fight so special was how unexpected it was. I knew J-Rock was a special fighter, and I expected the fight to be competitive, but I never thought it would go like that. It’s one of the best fights I’ve seen. Despite this, I’m worried it will get lost in the year-end shuffle, and maybe not get at least the consideration it deserves. Do you think it will be ignored? Can you think of any other fights from this year that may warrant FOTY consideration but won’t for whatever reason?

Thanks for another year of doing what you and everybody else does at The Ring.

Merry Christmas and Happy Holidays to you, the family, and The Ring. – Graham, Bangkok

Thanks for the kind words, that for the holiday wishes and thanks for sharing, Graham.

There are always Fight-of-the-Year candidates that take place during the first half of the year and get forgotten about or lost in the shuffle by the end of the year. This year was no different, especially because there were so many terrific elite-level matchups in September, October and November. 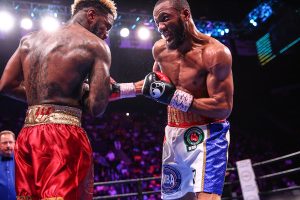 Williams-Hurd is definitely one of the better fights of 2019 that was shoved aside during a sensational second half of the year. A couple other fights that warrant Fight-of-the-Year consideration, but were left off the candidate lists of both the BWAA and The Ring (along with Williams-Hurd) are Danny Roman-TJ Doheny and Jose Ramirez-Maurice Hooker, two title-elimination showdowns that delivered intense style clashes, hardcore action and drama.

Roman-Doheny was one of the best fights I saw live from press row in 2019. If it’s not No. 1, it’s a close second to Errol Spence-Shawn Porter. (Joshua-Ruiz I is high on that list just because of the atmosphere inside MSG that night and shock value.) Ramirez-Hooker, a world-class shootout that ended as abruptly as a pistol duel, is one of the best fights I watched on TV in 2019. I’d only put the WBSS finals – Naoya Inoue-Nonito Donaire and Josh Taylor-Regis Prograis – ahead of it. I’d put Williams-Hurd behind Ramirez-Hooker only because I thought the 154-pound battle was a bit one-sided in rounds, as good as it was. I thought J-Rock won CLEARLY and I view his boxing performance as one of the best of 2019 (if not THE best).

At the end of the day (or year as is the case), I can’t get too upset about Williams-Hurd, Roman-Doheny and Ramirez-Hooker being “overlooked.” The truth is that we were spoiled with several top-notch fights, all worthy Fight-of-the-Year candidates, and I won’t argue with anyone who thought those three bouts were not quite on par with Gennadiy Golovkin-Sergiy Derevyanchenko, Manny Pacquiao-Keith Thurman, Inoue-Donaire, Taylor-Prograis, Spence-Porter, Pacquiao-Thurman and Ruiz-Joshua I.

Hope all is good brother and you and your family are getting ready for the festive season!

Been a good few months since I’ve written in but just hoped to get your thoughts on the welterweight division and future match ups, having listened to Vince and Kenny on The Boxing Rant – a podcast I know you listen to. The boys were talking about various match ups including Crawford v Porter (good fight) and Danny Garcia v Redkach (awful) but really got my interest when discussing the likelihood of Taylor, Prograis and Ramirez moving up.

How do you see those three hanging with Crawford and (if he gets back in the ring in full health) Spence?

For me the welterweight division is full of names but empty of quality other than those two. Yes, it’s one of the glamour divisions but at present it’s a poor imitation of its former glories. Still, let’s be positive, with the 3 musketeers moving up and talent like Josh Kelly coming through we could be facing a good few years.

To close things out, here’s a few MM’s that I don’t think you have done before (apologies if you have):

Thanks for another great year of the mailbag, mate, hope you keep it up! Cheers. – Mike, England

Thanks for the kind words, Mike, I’ll keep putting out mailbags for as long as you guys read ‘em.

Naz v Valero @ 128 catch weight (shootout!) – Indeed, it would be an elite-level shootout and I’m gonna ride with the haunted Venezuelan by mid-rounds stoppage. (Hey, I love me some Hamed, but if my man Kevin Kelley can drop The Prince three times with his southpaw stylings, the V-nom can clip the British star with more power and finality.)

Haye v Usyk/Holyfield @ 200 – Usyk by close, maybe majority decision in a very competitive fight (one where the Ukrainian wizard might get hurt or dropped); and The Real Deal by late, maybe brutal stoppage.

Marciano v Wilder – Bronze Bomber by decision if he boxes the way he did vs. Bermane Stiverne in his WBC title-winning effort; maybe he can stop The Rock late on cuts, but if he gets greedy and tries to blast the Italian-American hero he could get clipped himself.

Hatton v Crawford @ 140 – Bud by close but unanimous decision in a very good fight, one that’s even over the first half of the bout, but the switch-hitter from Nebraska would wear the Manchester idol down over the second half of the bout. 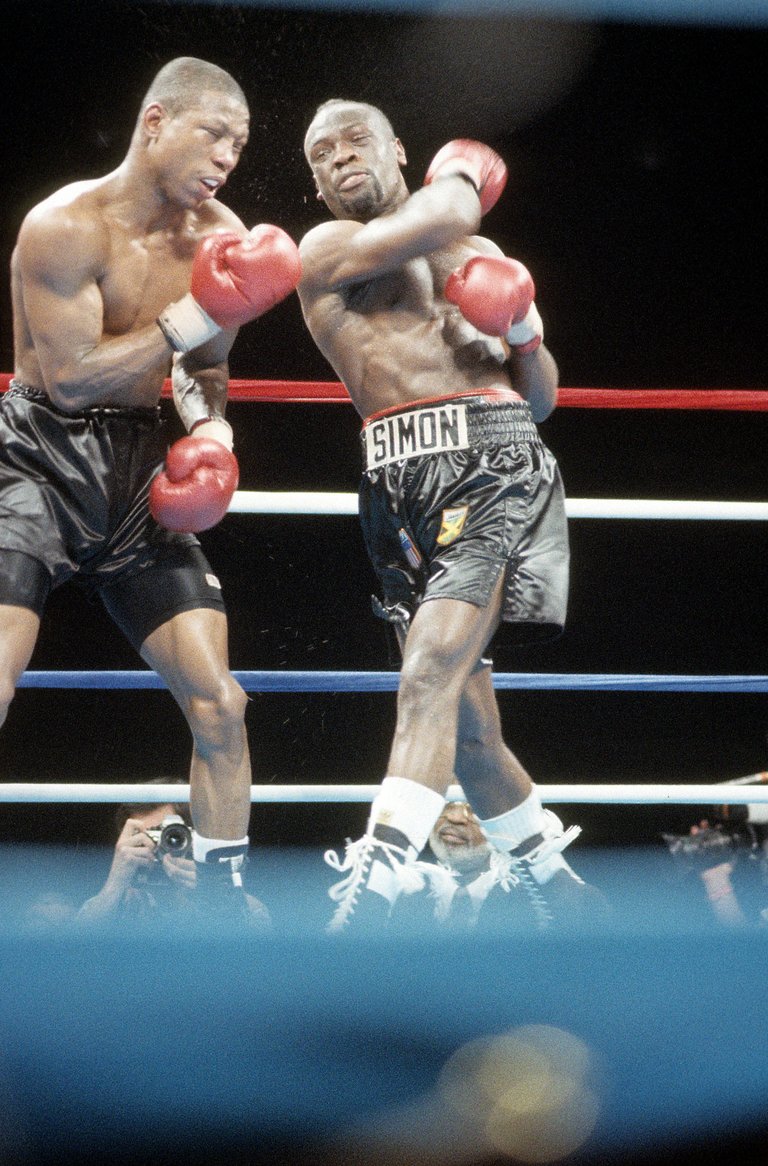 USED to be my favorite weight class in boxing. The 147-pound talent of the late ‘70s and early ‘80s (boyhood idol Sugar Ray Leonard and his rivals, Roberto Duran and Thomas Hearns) made me realize there was more to the sport than Muhammad Ali and the heavyweight division (plus they got me to read about the sport in magazines and newspapers). Simon Brown, Marlon

Starling, Mark Breland, Aaron Davis, Meldrick Taylor, Maurice Blocker, Pernell Whitaker and Buddy McGirt’s welterweight bouts on network TV, HBO and Showtime were integral to my transition to hardcore fanatic in the late ‘80s and ‘90s. And Felix Trinidad, Ike Quartey, Oscar De La Hoya and Shane Mosley were captivated me as a young boxing writer in the mid-to-late ‘90s and helped keep the lighter weight classes relevant to the mainstream sports press (and also helped to launch “new media” – AKA the internet – coverage of the sport). Boxing’s power brokers (and I’m talking about the networks more than I am about the promoters) could bring back the glory days of a former glamor division if they do business and make fights between Crawford and the best of the PBC.

The boys were talking about various match ups including Crawford v Porter (good fight) and Danny Garcia v Redkach (awful) but really got my interest when discussing the likelihood of Taylor, Prograis and Ramirez moving up. That’s what I’m looking forward to. I may be in the minority, but I think those three 140-pound standouts pose just as much of a threat to Crawford as Shawn Porter, Keith Thurman and Danny Garcia. (I viewed Errol Spence as the biggest threat to Crawford but I have no idea how long it will take for him to recover from his car crash injuries – or if he will ever be 100% again.) I think Taylor, Prograis and Ramirez are more dangerous than Adrien Broner, and maybe more so than Yordenis Ugas.

How do you see those three hanging with Crawford and (if he gets back in the ring in full health) Spence? I think Bud is a very special fighter. I would have favored him to outpoint Spence before the car accident, and I think he’s got too much experience and versatility for the junior welterweight studs. If those fights happen next year and in 2021, I’d favor Crawford, but I don’t think he’ll have any sort of size or strength advantage being a former lightweight and 140 pounder. I think all three would pose difficult styles for him to figure out and I think all three would put hands on him. They would be physical fights (and very entertaining) but I think he’d finish stronger vs. each standout and win close decisions.

What a year we have had in boxing – thank you for separating the BS from the true news in your weekly mailbag. I pray your family has a Merry Christmas, Happy New Year and a quick tax refund come JAN2020.

Which do you think is the more compelling Top Rank fight?

Also, if Santa was in the matchmaking business, which fights would you ask for in 2020?

I’ll be sending a note to the North Pole asking for:

Inoue vs SSR or Daniel Roman

I hope you have a good week and hope to hear some analysis on Monday of how Harrison pulled off the rematch vs Charlo.

I can tell you right now how Tony Harrison can retain the WBC 154-pound belt vs. Jermell Charlo – BOX! Stick and move. I’ve said it before and I’ll say it again, Charlo doesn’t deal well against movers.

What fights would I want from Santa The Matchmaker? Well, three of them are on your list (Crawford-Porter, Williams-Hurd II and Taylor-Ramirez). I have a feeling we’ll see at least one of them in 2020. 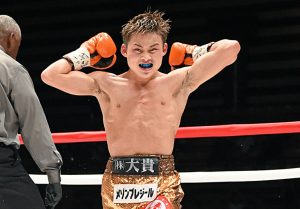 The other matchups that I’d put on my 2020 “wish list” include: Canelo Alvarez vs. Jermall Charlo (or David Benavidez), Juan Estrada vs. Roman Gonzalez II (if Chocolatito can get a couple tune-ups under his belt and he looks good), Artur Beterbiev vs. Dmitry Bivol, Hiroto Kyoguchi-Kenshiro Teraji (or Elwin Soto), Emanuel Navarrete vs. Luis Nery (or Danny Roman), Vasiliy Lomachenko vs. Tank Davis and Naoya Inoue vs. Nordine Oubaali (or John Riel Casimero).

Which do you think is the more compelling Top Rank fight? Teofimo Lopez vs Jose Ramirez or TB Crawford vs Jose Ramirez? They’re both very compelling matchups. Lopez is a big lightweight and is no doubt headed to 140 pounds, where he’ll be much stronger, very soon. I think Ramirez’s come-forward style plays to Lopez’s strengths but I think Ramirez’s workrate and experience could give the phenom problems. But I’m more interested in Crawford-Ramirez because it’s a clash of two proven champs – one who is elite (Bud) and the other who is world-class (and potentially elite). I think Crawford-Ramirez is the more significant fight. Ramirez-Lopez would probably be more explosive, but Crawford-Ramirez would likely turn into a sensational battle of attrition.