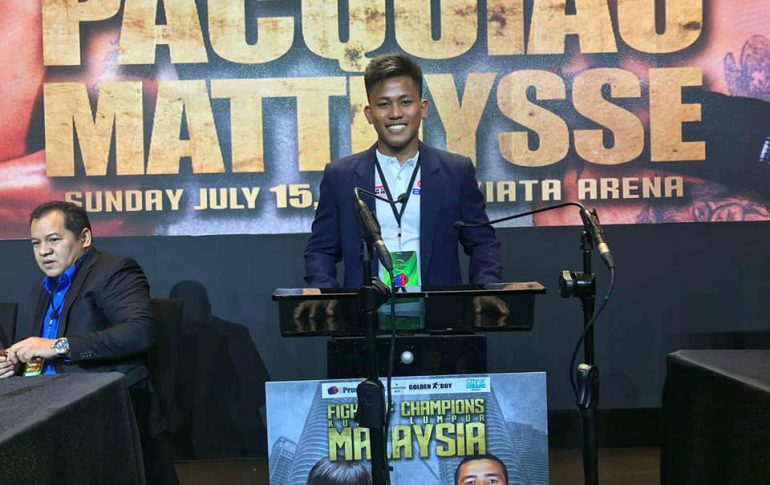 A year which was supposed to be a breakout one for Jhack Tepora has mostly been one to forget. And that’s when Tepora realized he needed to make changes.

The 27-year-old Filipino boxer had never been lacking in ability, but his focus and discipline had come into question, especially after he missed weight by nearly six pounds for his fight against Hugo Ruiz on the pay-per-view portion of the Manny Pacquiao-Adrien Broner card in January. That fight was canceled, and, after his decision win over Jose Luis Gallegos in June, decided to leave the lax atmosphere of Los Angeles to train under Jorge Capetillo in Las Vegas.

“Jhack needs adult supervision,” said Sean Gibbons, president of MP Promotions. “He’s a guy that needs a hands-on trainer, he needs a guy that focuses on him, not having six, seven fighters, it needs to be all about Jhack.”

“I am more dedicated and mature now as a boxer since I have a new trainer and he pushes me to my limits,” said Tepora (23-0, 17 knockouts) of Cebu City, Philippines. “He’s not only giving me a nice training but he also gives me some love like a father.”

The 24-year-old Tepora will get a chance to show he’s back on the right track on Saturday, when he faces Colombian journeyman Oscar Escandon (25-5, 17 KOs) in a ten-round bout on the Tony Harrison-Jermell Charlo II card at the Toyota Arena in Ontario, Calif. The 10-round bout at a 127-pound catchweight will precede the main Fox-televised broadcast on FS1.

Tepora has been working since October with Capetillo, who also trains former junior featherweight titleholder Jessie Magdaleno, and was the cutman who kept Tyson Fury in the fight against Otto Wallin in September, when his right eye suffered two awful cuts that threatened to end the fight early. Among the sparring partners in camp for Tepora is Tomoki Kameda, the former WBO bantamweight titleholder.

“Going over to work with Jorge, living at Jorge’s house the last couple of weeks, it’s a big thing,” said Gibbons. “Jhack’s got a lot of mental things that can deter him, he knows how to fight, but mentally he really needs a guy on him all the time to just keep him pumped up and heading in the right direction.”

If Tepora can show that, then another opportunity to raise his profile could be next. Gibbons says he’d like Tepora to face anyone in the top ten of the major sanctioning bodies who can help position him for a title opportunity in the middle of 2020.

“He needs to go out and look good, he needs to starch this guy. I thought he was always known as a bit of a puncher, Tepora, he seems to be able to crack. He doesn’t need to go out there and labor for ten rounds with a guy that’s coming off three losses,” said Gibbons.

Escandon has not won a fight since 2016, and was stopped in succession by Gary Russell for the WBC featherweight title, followed by Tugstsogt Nyambayar and Brandon Figueroa. Escandon’s last bout was in September of 2018, but Tepora is ready for a fight.

“He’s a good boxer with power. I never get overconfident in any of my fights,” said Tepora.