The Fight Before Christmas: Ryota Murata vs. Steven Butler 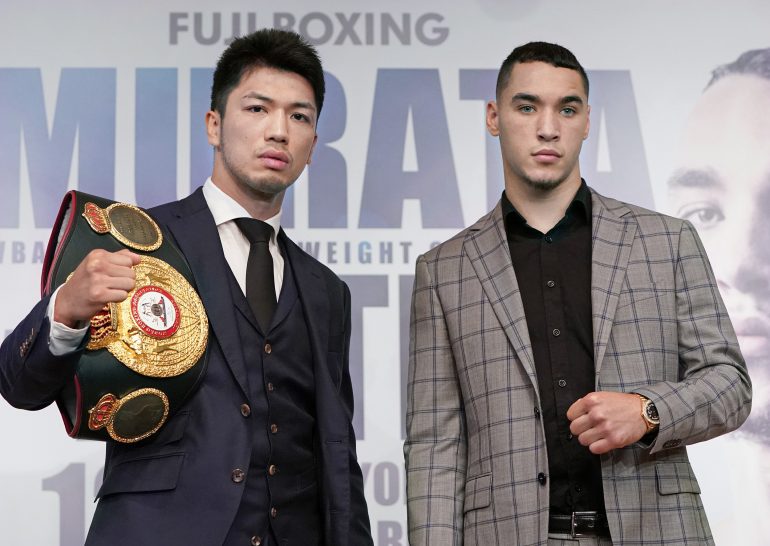 It’s a significant step up in class for the 24-year-old but one he is confident he can successfully make.

“It’s not only about my training camp; I worked all my life for this opportunity, for this fight,” Butler (28-1-1, 24 knockouts) told The Ring. “I’m very, very excited, very confident. I don’t want to be cocky but I know I’m going to win the fight because it’s my time. It’s my belt.

“I’m fighting not like the underdog; [Murata] is the underdog. If he wins against me, it’s an upset. I’ve come to take what is mine.”

[Editor’s Note: Murata holds a secondary WBA title. However The Ring Magazine only recognizes its champion Canelo Alvarez as the legitimate WBA titleholder.]

Butler’s current journey is a far cry from growing up in Montreal. Although Butler’s grandfather Marshall boxed with middling success, going 20-5 (with 15 KOs) in the 1970s, it wasn’t an obvious career path Butler set out to follow That said, it’s one that seems to have worked out well.

“When I was in fifth grade, they labeled me as hyperactive and put me on Ritalin,” he explained. “I’ve found peace of mind through boxing. Even though I played other sports, nothing releases my anger, my energy and provides me with true clarity except boxing.

“I no longer take meds. The moment my glove makes contact, I am free. Boxing is my new prescription.”

He took up boxing when he was 12 but in the beginning he didn’t take the sport seriously.

Butler sprang to prominence when he became the youngest ever Canadian National champion, at age 18. He also won Bronze, Silver and Golden Gloves, was three-time champion of Quebec, Adidas Cup champion and won the Poland vs. Canada tournament.

“I decided what I wanted to do in my life and who I wanted to become,” he said. “I’ve decided that not only do I want to be world champion, I also want to become a boxing legend.

“I started sparring with big names in Quebec…I started to improve a lot and won a lot of important tournaments. Then my team and I decided it was time to turn pro.”

Butler made the transition as a teenager in March 2014 signing with Camille Estephan’s Eye of the Tiger, initially campaigning at junior middleweight.

After winning his first 12 fights, “Bang Bang” Butler’s progress was slowed when he drew against the savvy Jaime Herrera. Butler put the blemish behind him and continued his career until he met domestic rival Brandon Cook in January 2017.

“I was young and, for me, I learned a lot from this fight,” he explained. “He hit me with a good shot at a good moment. I have no excuse; I lost the fight. Now I’m here fighting Murata. Where is [Cook]?”

Butler has regrouped, winning 10 times since, including stopping Herrera in 10 rounds in their rematch, stopping experienced veteran Carson Jones in seven rounds, at 160 pounds, and in his American debut, he edged Vitalii Kopylenko by split decision over 10 hard fought rounds.

“It was a big fight; it was a big moment,” he said. “I showed a lot of heart. Kopylenko was a very good boxer, 28 wins, one loss; he had 200 amateur fights. It was a good experience. I learned a lot about fighting for the rest of my career.”

That coming-of-age victory showed Butler had learned from the Cook loss and gave his team confidence that their man could succeed at the highest level.

“That win was a good preparation,” said Estephan. “He had to go to hell and back. It wasn’t as we expected. Then he fought in Montreal and knocked out a very durable guy [Paul Valenzuela Jr.] in 38 seconds.

“He was positioned as the mandatory to [WBO middleweight titlist Demetrius] Andrade. We had the fight done on a DAZN card and then Murata came up. We studied all options and we decided to go with Murata.

Butler is excited about the prospect of facing the hugely popular Japanese fighter in his first fight outside North America.

“I have no pressure; I believe it is my destiny,” he said. “I worked so hard; I fought from the bottom. I am here for a reason. I’ve not come to take a check or fight a world title fight; I’ve come to win. All my team know that we’ve done all we can do to be ready.

“I have a plan and he has a plan. I can’t go there and go for the knockout quickly because we have 12 rounds. I’m coming to win all the rounds, round by round, but like Mike Tyson said, ‘When I hit him, his plans are going to change.’ I know I have the power to do this.”

As an amateur, Murata won silver at the 2011 World Championships and gold at the 2012 Olympics. He turned professional in August 2013, winning his first 12 contests before dropping a controversial split decision to Hassan N’dam N’Jikam in May 2017. The 33-year-old rebounded to stop N’Jikam in seven rounds. Murata (15-2, 12 KOs) has since lost to Rob Brant but again exacted revenge, stopping the American in two rounds.