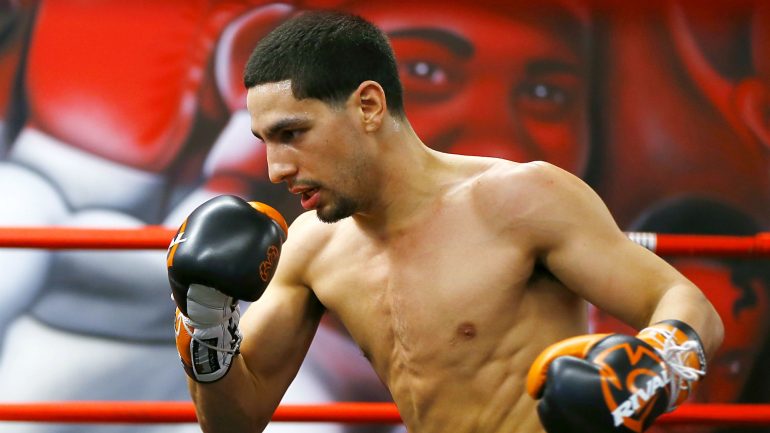 The 12-round bout will take place Jan. 25 at the Barclays Center in Brooklyn, New York. The fight will follow the 10-round junior middleweight clash between former unified titleholder Jarrett Hurd and Francisco Santana.

Garcia (35-2, 21 knockouts), of Philadelphia, Pa., has not fought since Apr. 20 in Carson, Calif., dropping Adrian Granados three times en route to a knockout victory in round seven. It was his first fight since Sept. 8 of last year, when he lost by unanimous decision to Shawn Porter for the vacant WBC welterweight title.

After winning two world title belts as a junior welterweight, the 31-year-old Garcia won the vacant WBC welterweight title in January of 2016, defeating Robert Guerrero by unanimous decision. He has split his last four bouts, with the other loss coming at the hands of Keith Thurman by split-decision in March of 2017.

While his fight against Redkach is a WBC world title eliminator, a lot is on the line, but Garcia believes an impressive victory would send a message to the other titleholders and contenders in the division.

“I’m very excited to be headlining another card and to go back to Barclays Center, my home away from home,” said Garcia, who is trained by his father Angel. “I can’t wait to step in the ring in Brooklyn and give fans the Danny Garcia show.”

“I watched a few of Redkach’s recent fights and he had a great knockout win over two-time champion Devon Alexander (on June 1). So, I know he’s a tough fighter and competitor who I expect to bring the best out of me, and he’s someone who deserves this opportunity. But Jan. 25 is tax season, so I’m going to have to tax him and pay him with a reality check.”

Redkach (23-4-1, 18 KOs), who is originally from the Ukraine and now resides in Los Angeles, was down on the scorecards when he dropped the southpaw Alexander three times en route to a knockout victory in round six.

As a lightweight, the 33-year-old southpaw lost to Dejan Zlaticanin, Tevin Farmer and Argenis Mendez. He would lose a back-and-forth war with then-junior welterweight John Molina before winning his last three bouts, including the win over Alexander.

Redkach believes a win over Garcia would immediately put him into title contention.

“I’m very motivated to take a massive step in my career and get closer to becoming world champion against a strong and accomplished fighter like Danny Garcia,” said Redkach, who had Shane Mosley in his corner in his last bout. “I have been to a lot of Danny’s fights and now I get the chance to test myself against him. I am training very hard so that I am the best that I have ever been on Jan. 25. I’m going to shock the boxing world just like I did against Devon Alexander. I’ve never been this hungry before and I’m confident I will win this fight.”

Hurd (23-1, 16 KOs), who resides in Accokeek, Maryland, last fought on May 11, when he lost by unanimous decision to Julian Williams. Hurd is best remembered for his exciting split-decision victory over Erislandy Lara on Apr. 7 of last year in the consensus ‘Fight of the Year’ of 2018.

The 29-year-old hopes for a rematch against Williams later this year.

“Just because I fell back doesn’t mean I fell off,” said Hurd. “I’m back and excited to fight at the Barclays Center for the third time. I’m bringing the storm back on January and I’m going to make a statement everyone is going to see. You’re not going to want to miss this fight and the best Jarrett Hurd anyone’s seen.”

Santana (25-7-1, 12 KOs), who resides in Ventura, California, last fought on Mar. 16, losing a close unanimous decision to Abel Ramos. The 33-year-old has lost three of his last four bouts but has been a fan-favorite of Southern California fight fans due to aggressive and come-forward style.

“This is a great opportunity for me against a fighter like Jarrett Hurd,” said Santana, who has recently fought as a welterweight. “When you get an opportunity like this, it’s hard to turn it down. My job is to rise to the occasion and have the best moment of my career on fight night. This is my Super Bowl. When I last fought at 154-pounds, I was basically self-trained. Now I have my coach Joseph ‘Hoss’ Janik training me and I really think he’s the missing piece of the puzzle for me. I’m going to go in there and leave it all in the ring Jan. 25.”

In the opening bout on the Showtime telecast, junior featherweight Stephen Fulton (17-0, 8 KOs) will square off in a WBO world junior featherweight title elimination bout against Ukraine-born Arnold Khegai (16-0-1, 10 KOs), a ‘ShoBox’ series alumni. Both fighters reside in Philadelphia.