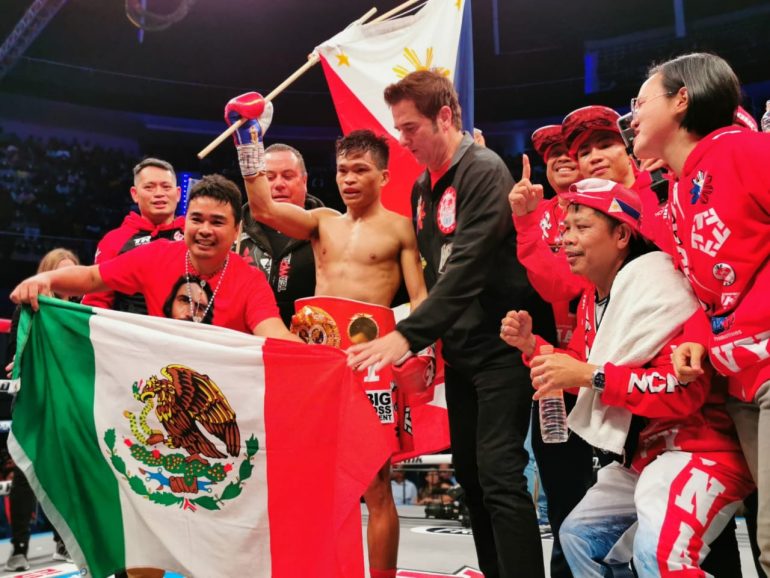 NEW YORK — Jerwin Ancajas has made eight defenses of his IBF junior bantamweight title, but the 27-year-old Filipino has yet to obtain his signature win.

That could come in 2020, as Top Rank vice president Carl Moretti says he hopes to match Ancajas against either the returning Roman Gonzalez or Carlos Cuadras.

“I see [Ancajas] in a meaningful fight next year, maybe against Chocolatito, maybe against Cuadras,” said Moretti. “We gotta figure that out over the next couple of weeks.”

Top Rank CEO Bob Arum adds that Ancajas will be signing an extension for “at least six more fights,” and is likely to return to the ring in February or March.

.@BobArum says Top Rank will re-sign Jerwin Ancajas to a six-fight contract extension, plans to bring him back in February or March pic.twitter.com/xCQzfXpQvE

Ancajas (32-1-2, 22 knockouts) is coming off a sixth round stoppage of Chilean Miguel Gonzalez on Dec. 7 in Mexico. Prior to that, the southpaw boxer-puncher finished mandatory challenger Ryuichi Funai by a similar outcome, putting behind him a disappointing 2018 in which he had an uneven performance against Jonas Sultan, and struggled to a draw against Alejandro Santiago.

Speaking from a resort in Bukidnon province in the Philippines, Ancajas says he’s long wanted fights with both of those former champs.

“I used to watch them on TV and I want to fight them, given the chance,” said Ancajas, who is rated no. 5 by The Ring at 115 pounds.

“It depends on the plans of Top Rank. I will be ready for whoever they match against me.”

Trainer/manager Joven Jimenez also likes those fights for his boxer, particularly against Gonzalez, the former pound-for-pound champion who brought a lot of attention to the 115-pound division through the HBO “SuperFly” series.

“Jerwin is looking for Chocolatito for a long time; Jerwin dreamed of that,” said Jimenez.

“And for Cuadras, Jerwin is looking to fight [him] since he beat [Srisaket Sor] Rungvisai [in 2014]. Jerwin idolized all those boxers and dreams for a fight with them.”

Gonzalez (47-2, 39 KOs) has been out of the ring for 15 months due to injuries, but the 32-year-old is scheduled to return on Dec. 23 against Filipino journeyman Diomel Diocos. He had won titles at the sport’s four lightest divisions, but was derailed in two consecutive fights by Sor Rungvisai in 2017.

Cuadras (39-3-1, 27 KOs) has won three straight against limited opposition since losing to McWilliams Arroyo in Feb. of 2018.

Ancajas had been pursuing a fight against Juan Francisco Estrada, but the RING champion has been linked to a unification fight with WBA titleholder Kai Yafai. That fight has been postponed multiple times as Estrada deals with hand injuries.

“I don’t see it immediately, no,” said Moretti, about an Estrada-Ancajas fight.

“We are aiming for Estrada,” said Jimenez.