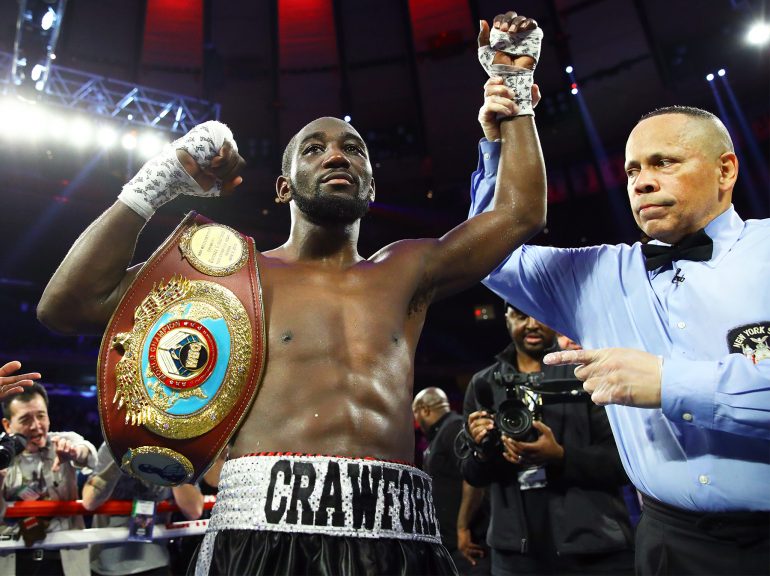 NEW YORK, NY — Terence “Bud” Crawford finds himself in this netherworld. These last few years, he’s been relegated to doing the perfunctory thing: A mundane title defense in which he looks absolutely impervious against a lesser opponent, then complains afterward why he can’t get a shot at Errol Spence Jr., Shawn Porter or Keith Thurman—something he deserves.

Egidijus “Mean Machine” Kavaliauskas wasn’t thought of as any more than an entertaining, stay-busy opponent—and he fit the bill Saturday night before 10,101 at Madison Square Garden on ESPN.

Crawford, the 32-year-old southpaw from Omaha, Nebraska, did the perfunctory thing, blasting out Kavaliauskas, the 31-year-old Lithuanian, rather easily, winning his third title defense by TKO at :44 of the ninth round. 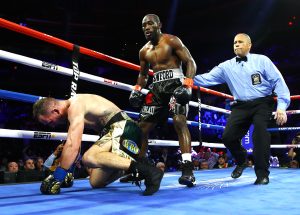 “I thought I had to entertain ya’ll for a little bit,” Crawford said. “He’s a strong fighter, durable, and I thought I’d give the crowd something to cheer for. I’ll fight anybody. I’ve been saying that for I don’t know how long. I’m not ducking anyone on the PBC side or Top Rank platform.

“I want to fight all the top guys.”

Dressed in black with glittering silver trim, Crawford (36-0, 27 knockouts) entered the ring like a man walking to work with a lunch pail. Eyes down, bouncing on his toes, there was a calm that exuded confidence, as if he was telling himself, “I have this.”

Nether fighter did much of anything in the first. If anything, Kavaliauskas may have gotten the better of Crawford in the first landing a few lefts to the body, and a shot to the face.

In the second, poked at Mean Machine with his right, working to establish distance. Each time Crawford hopped forward, Kavaliauskas (21-1-1, 17 KOs) stepped back. With less than :40 left in the round, Crawford did open up slightly to tag Mean Machine with a quick left to the face, which Mean Machine countered with a right.

But after two, it was a tactical waiting game, with either fighter willing to commit to anything.

With 2:06 left in the third, there was uneasiness among the crowd, and a trickle of boos. Then, with 1:30 left in the round, Mean Machine appeared to knock down Crawford with a right to Crawford’s left cheek, followed by a barrage of punches, of which most didn’t land.

But Crawford fell to the canvas. Referee Ricky Gonzalez, however, called the fall a slip.

“I wasn’t hurt at all,” Crawford claimed. “I got up and went straight to him. I wasn’t hurt by no means, I walked through everything he threw all night.

“The round before that, my coaches kept telling me stop loading up. I was loading up a lot because the first couple clean shots I landed, I knew I hurt him. I wanted to give the crowd a knockout. When I started letting my hands go, I started landing more fatal shots.”

Either way, it was a strong round for Mean Machine, the kind of round that could have filled him with some confidence.

Whether it was a slip or knockdown, it appeared to wake Crawford up. Bud found a rhythm and distance, attacking Kavaliauskas with straight lefts and left counters.

In the opening :30 of the fifth, Kavaliauskas got a little brave. He attacked Crawford with a body shot, and plowed him with a straight right to the face. With 1:20, Crawford dropped a right to the body that seemed to slow Kavaliauskas. Mean Machine lowered his right the last minute of the round.

After five, it was possible to see Crawford up, 3-2.

Crawford was patient in the sixth, playing the waiting game. But Kavaliauskas was cautious, too. It was a nondescript that was hard to judge, though Crawford did land a looping right to Mean Machine’s head.

With less than 2:00 left in the seventh, Kavaliauskas bounced a few shots off of Crawford, who calmly took them and came forward. In the last minute of the round, everything changed. 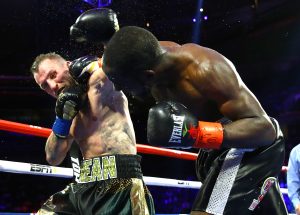 Crawford landed a right hook, and down went Kavaliauskas. For the last :30, Mean Machine was in a place he never inhabited before in his pro career—desperation land.

By now, Kavaliauskas’ right eye was beginning to show signs of punishment.

More was to come.

Crawford put his fists and foot down in the ninth. He started the round with left to the chin that had Kavaliauskas reeling backward. Crawford used a right uppercut that dropped Mean Machine the first time.

After Gonzalez reached eight, Crawford got at Kavaliauskas again.

This time, it was quick.

Crawford walked across the ring and dropped Kavaliauskas with a looping right. Mean Machine went down a third time, and Gonzalez didn’t bother counting, waving it over at :44 of the ninth round.

The clock is ticking. He’s 32. Spence, Porter and Thurman aren’t running to him. They have their own sandbox to play in.