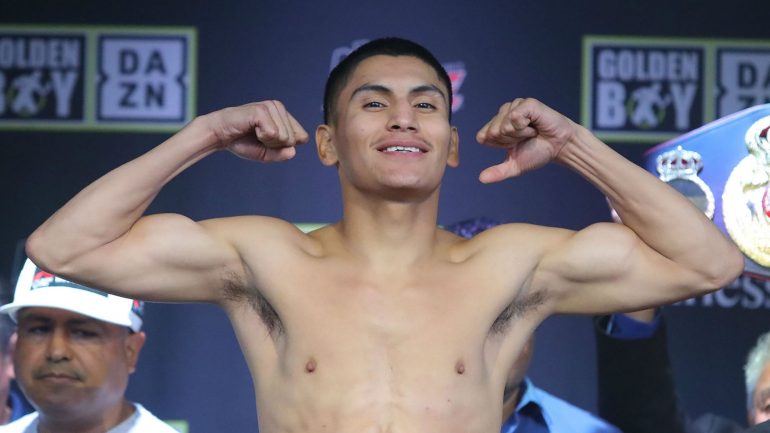 Brad Solomon was supposed to provide a stern test for Vergil Ortiz. Instead, the unbeaten welterweight prospect looked impressive in breaking down a slick fighter and winning again by knockout.

Ortiz dropped Solomon three times before ending matters in Round 5 on Friday at Fantasy Springs Resort Casino in Indio, California. The scheduled 12-round bout was the main event of a Golden Boy Promotions card streamed live on DAZN.

It was another solid outing for Ortiz, who is quickly becoming a legit contender in a very competitive 147-pound division. In his last bout on August 10 in his hometown of Grand Prairie, Texas, Ortiz battered former world junior welterweight title challenger Antonio Orozco before stopping him in Round 6.

Despite not fighting in 18 months, Solomon was effective in the early rounds, utilizing distance and trying to box from behind a steady jab. That tactic worked for a few rounds as Ortiz closed the distance. By the third round, Ortiz began timing him, ripping two- and three-punch combinations to the head, prompting Solomon to back away and fight off the ropes.

Ortiz scored a knockdown in Round 4, dropping Solomon to the canvas with a jab.

“I have to be honest,” said Ortiz after the fight. “I think he slipped and tripped over my foot.”

One round later, Ortiz scored a more-legit knockdown, landing a combination followed by a right hand to the head. Solomon was game after beating the count, but the end was inevitable. Moments later, Ortiz trapped Solomon in a corner, ripping a barrage of punches that forced Solomon to take a knee.

“I give him credit,” said Ortiz, who is trained by Robert Garcia. “He was difficult to figure out. He made me think. I tried not to rush things. I had to utilize my jab. I just had to use my smarts. I knew he was going to be a tough cookie to break. I felt like I did a good job.”

It will be interesting to see how Golden Boy Promotions matches Ortiz in 2020. He is already ranked in the top 10 by two of boxing’s sanctioning bodies, including a No. 5 ranking by the WBO.

Ortiz did tell The Ring earlier this week he would like to face the likes of Keith Thurman. Whether a fight against him or any of the top welterweights in boxing remains to be seen, especially with the current state of boxing politics.

“I would rate my performance as a high B-(low) A,” said Ortiz.

Solomon, who resides in Douglasville, Georgia, drops to 28-2, 9 KOs.

The lightweight debut of Alberto Machado, who was in the co-main event of the evening, was a success.

Machado dropped Luis Porozo three times before the fight was stopped at the end of the third round.

The win over Porozo was Machado’s first fight since losing back-to-back fights to Andrew Cancio, the last of which occurred almost six months ago on June 21. Both fights also took place at the Fantasy Springs Resort Casino.

Machado, who resides in San Juan, Puerto Rico, looked rusty from the opening bell, lunging in at times against the awkward Porozo. He settled down in round two, utilizing a jab to set up right hands, but it was left hooks to the body of Porozo that did the most damage.

A left hand to the stomach midway through the round dropped Porozo to the canvas. Porozo beat the count and was able to fight back, but a left hook to the body dropped Porozo a second time. Porozo was game, beating the count, but was dropped again near the round, prompting referee Thomas Taylor to stop the fight at 2:59.

“We worked on landing that punch during training camp,” said Machado after the fight. “My corner was able to calm me down after the first roundand told me to work the jab, which worked well for us. I’m glad we were able to get the victory.”

The southpaw Melikuziev outboxed Alexander throughout much of the fight. Alexander, who spent 11 years in prison in Missouri for armed robbery and assault before returning to boxing in 2016 as a tough gatekeeper, did little to initiate exchanges. Melikuziev worked behind an effective jab, mixing his attack to the head and body of Alexander.

Alexander looked like he was in survival mode by the final two rounds of the fight, where Melikuziev was content to box from the outside.

After an even opening round where both fighters stood and traded in the pocket, Rocha almost went down from a right uppercut to the head. The southpaw Rocha was hit repeatedly as Valenzuela threw everything he could in an attempt to stop Rocha. The tactic failed and Rocha was able to weather the storm, using the minute-rest after the round ended to gather himself.

Rocha swung momentum his way in round three, focusing his attack to Valenzuela’s body by digging hooks and left hands. Valenzuela’s punch output dropped significantly with each passing round as he looked lethargic and tired after throwing everything at Rocha in round two. He did catch Rocha with an occasional hook and cross, but fought in spurts.

The 22-year-old Rocha, who resides in the Los Angeles suburb of Santa Ana, is the younger brother of junior featherweight contender Ronny Rios.

In the opening bout of the card, super middleweight Erik Bazinyan knocked out Saul Roman (46-14, 38 KOs) of Tijuana, Mexico at 46 seconds of the third round. Bazinyan, who is originally from Armenia and now resides in Montreal, Canada, improves to 24-0, 18 KOs.