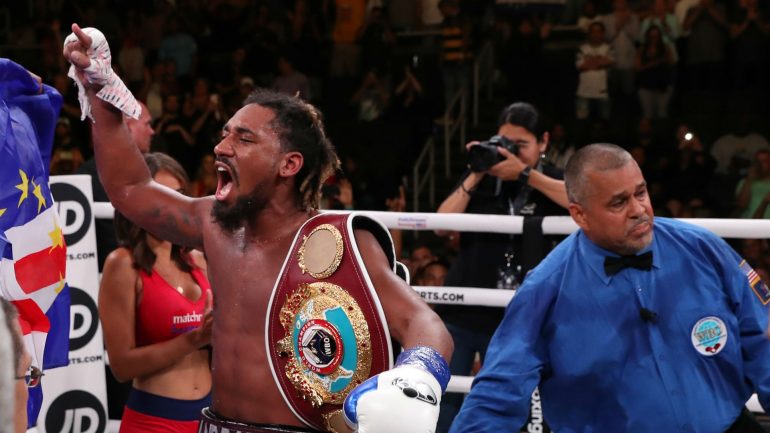 The man has the patience of a saint, you can argue. Yes, Demetrius Andrade is one of the topmost best technicians in the game today, but the Rhode Island native is in a semi difficult spot.

That’s because his ring generalship is of the variety that it makes him much avoided. The hitter, who spoke to RING from Miami, where he’s training, said that he just tries to stay busy, and believe that in the near future, he will be rewarded with a big bout.

In the meantime, the WBO middleweight champion said, he will stay busy, fight who they put in front of him, and stay right-minded. As far as being busy, Andrade has his next date and foe to reckon with. On Jan. 30, at an arena which will be built up to hold 65,000, and then taken down, and trucked to another city, the 31 year old southpaw Andrade will meet Irishman Luke Keeler.

That is a Thursday night, and the tango will top a card to screen on DAZN. On Saturday, Lady GaGa will play the same joint, and then the arena will take leave, to another location.

“It’s been difficult to get in with the big names, and so anyone willing to fight me gets props, for taking the challenge,” said the Rhode Islander, who said he likes to train where it’s warm, so that’s why he’s in Florida. “It’s great to get back in the ring, and I want to show people that there’s other champs, besides Canelo. Canelo has been dodging me, using excuses not to fight me. I want to put on a show, and stay tall, black and handsome!”

Looks like Keeler is someone he can do that with. Andrade will be a severe underdog against a guy whose best win is over Luis Arias. Keeler sometimes waits and stares too much, has OK hand speed, and will look and feel under sized compared to the solid Andrade. It might be hard for Andrade to look great, being that Keeler won’t likely come at him, guns a blazing. He usually fights smart, waits for openings, and he won’t find them on the WBO champ. Short arms and high guard will leave him open to getting strafed to the body, it looks like.

Anyway, Andrade touched more on the red-head, who holds a WBA 160 strap, but also has campaigned with success at 168 and recently 175.  “Canelo is boring,” Andrade shared. We the talked about fighting styles, fighting smarter not harder, looking to avoid trades, which is better for the short and long term wellness of the athlete. Andrade himself has been subjected to scrutiny, and critique, for not being more of a trader type, as sometimes Canelo is. “You gotta do whatever it takes to get the W,” the fighter nicknamed “Boo Boo” said. “People want you to bang it out, but do they wanna bang it out? They don’t want to do that. They don’t wanna be in the hospital, stay pretty. When people are going at you, throwing bombs, you don’t go bomb for bomb. That’s not what the Army does!”

And his patience level; how does he maintain that?  “As long as I’m staying active, people are noticing the real skill out there, appreciate my hard work, what I bring to the table. If I get that (mega fight), I get it. It’s not on my hand.”

I have to think Andrade manages to get a Canelo or GGG or Jermall Charlo or Sergey Derevyanchenko in a ring in 2020. Does he believe the same? “For sure, I don’t see why not…at the end of the day, it’s not my end. Who of those is most likely to fight me? I think Derevyanchenko would definitely take the fight, I think the pressure is on GGG pretty soon, it takes two men to agree. I don’t have no excuses, I want to show the world who really is the best, has the skill and talent, may the best man win, that’s it.”

And so he soldiers on, that level of patience likely being bolstered by the fact that DAZN and Matchroom compensate him at a premium level for his efforts. He is jazzed, he said, to show off the skills in Miami at Meridian Island Gardens.  “Hopefully, the New England Patriots will be there,” he said, referring to that being Super Bowl week and that Super Bowl 54 unfolds Feb. 2 in Miami. “And I ask that people support boxing, no matter who it is fighting. People who haven’t stepped in the ring, try it, and keep it humble.”