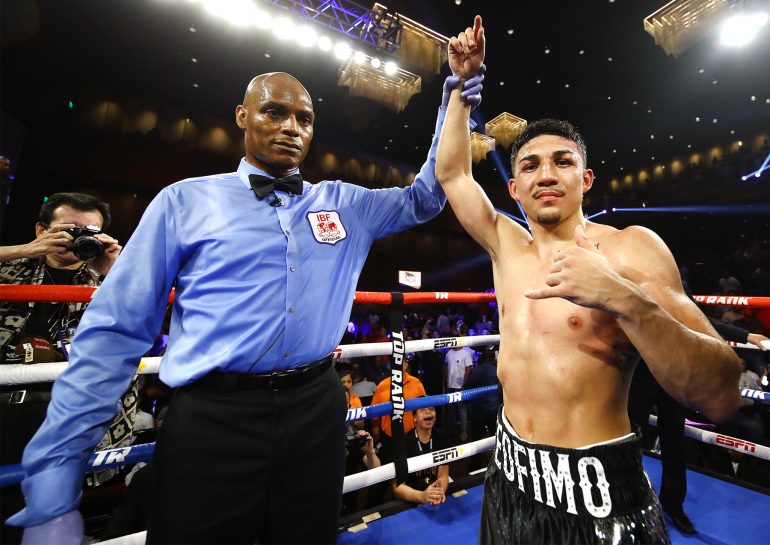 Teofimo Lopez is a 22-year-old lightweight contender who’s shown a penchant for knocking opponents out, with a flair for signature victory backflips attached. He’s undefeated, and supported by the powerful promotional company Top Rank and Hall of Fame promoter Bob Arum.

But as he climbs in stature and with boxing fans, there’s been an underlying sense that something is missing. He seems to be here, there, everywhere, with his ongoing well-documented family saga, whether or not he has the sustainable skills to be a crossover champion and, most importantly, whether he’s truly comprised of champion timber at all.

Hopefully, those pertinent questions will be answered this Saturday night when Lopez (14-0, 11 knockouts) challenges IBF lightweight titlist Richard Commey (29-2, 26 KOs) at Madison Square Garden in New York on ESPN (9 p.m. ET/6 p.m. PT). Commey-Lopez will be part of a tripleheader that will be the co-feature to the WBO welterweight title of Terence Crawford (35-0, 26 KOs) against Egidijus Kavaliauskas (21-0-1, 17 KOs).

Lopez, though the challenger, is considered the “A-side” of this fight. He’s expected to win, and then take off on the lightweight wonder wheel sweepstakes with lightweight world champion Vasiliy Lomachenko, Devin Haney, Ryan Garcia, Luke Campbell, and a host of other 135-pound possibilities ahead.

But, first, he’ll need to repel the 32-year-old Commey, who hails from Ghana, has proven he can take a punch and has been in the ring with far better fighters than Lopez.

“I know it’s big,” said Lopez, whose team has added trainer Joey Gamache joining his father, Teofimo Lopez Sr, in the corner. “This fight right here changes everything. And I know that. I’ve been pushing myself more than I usually do. I’m getting in the work I need to get. After sparring, I would usually do my sit-ups and that would be it. I’m doing so much more after sparring. I’m just pushing myself to that limit. I know these are the championship-caliber fights I’m gonna be into. I’m gonna be the first Honduran champion and bring back the belt to all of Central America. So, this is a real big fight, man.

“It’s a huge opportunity for me and what better way to end the year, but on Heisman Trophy night, on ESPN, the best platform out there. I think overall, man, it’s gonna be a hell of a night. After this fight, we’re on to, hopefully, the Lomachenko fight in early 2020. So, you know, we finish [2019] with a bang and we start [2020] off with a boom.”

What Lopez would like to erase, what gnaws at him, is his most recent outing. Boxing, like any other sport, is often based on the old bromide, “What have you done for me lately?”

Lately, Lopez handily beat Japan’s Masayoshi Nakatani in May, though it was a fight raised some queries. Nakatani is a rangy 5-foot-11½, to Lopez’s compact 5-8, and 68½-inch reach. Commey is 5-8, with a 71-inch reach and whose face has yet to meet a punch it couldn’t take.

Early on, Nakatani used a jab to the body in keeping the powerful Lopez away. Lopez’s didn’t really begin to establish himself until the fourth.

Lopez’s won’t be able to get away with that against Commey, who a more seasoned, patient and more powerful fighter than Nakatani.

“I know what I can do, and that’s beat this guy,” Lopez said. “My thing is that I’m all about vengeance. When people have this way of saying things about me, I hold that. And that’s my motivation right there, to shut people up. You can’t shut everybody up, but I know I can prove to myself that I am the best. Come December 14th, I’m gonna show that.”

It would be nice to get an identity.