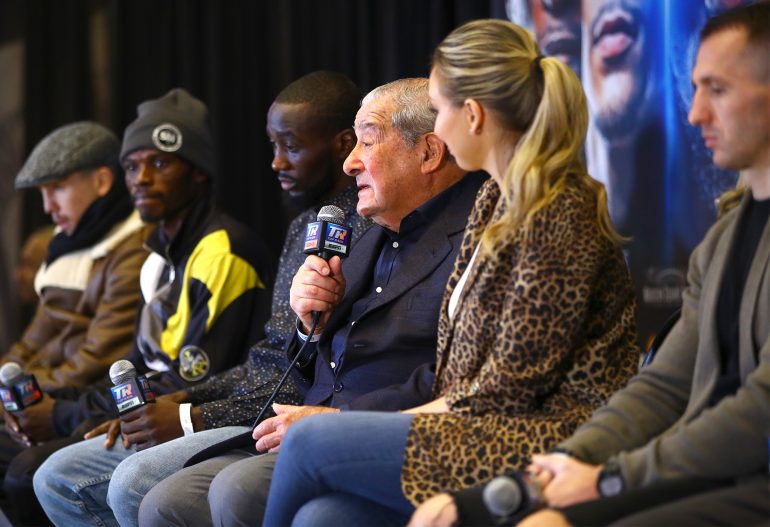 Bob Arum is not taking part in the main event Saturday night at Madison Square Garden. Terence Crawford is, as the A-side, and Egis Kavaliaskaus joins him as the B- side who’d be scoring the co-upset of the year if he beat the Nebraskan.

But for some of us long-time coverers of the fistic wars, Arum is kinda the focal point of the promotion. Partly, that is because he is a true blue, and red, and white American living legend, 88 years old and still possessing the spirit and taste for in-the-business ring combat that he showed the last time our society sat in such a puddle of mixed rage/inertia/self loathing and neighbor to neighbor animus, in the 70s.

Also, Arum grabs such a lion’s share of the spotlight because Crawford is a victim of the age we are in, which has the sports’ stars doing more intra-promotional face-offs than taking part in fights based on a dictum of, let’s have the best fight the best, and see where those chips fall.

The 35-0 (26 knockouts) Crawford, for the record, actually did something of an Arum imitation when, during the Wednesday presser at MSG, he ran through all the bullet points of interest on the Saturday slate, which screens on ESPN+ and then regular ESPN, after the Heisman Trophy is awarded.

The WBO title-holder Crawford was not in his game-face surly mode, which you could argue might bode better for the 21-0-1 (17 KOs) Kavaliaskuas, but actually not, because he goes game face when the bell rings.

I take it back: Crawford did show game face when he started his chat session with media in the pre presser. No questions about the “other side of the street” deal, guys, he said, because I won’t answer them. Meaning, don’t ask me about Errol Spence, or Danny Garcia, or Shawn Porter, or other PBC boxers, because I take the Kavaliaskaus challenge seriously. The press complied, they usually do, Crawford has some killer Manson lamps to do a great job boring through the souls of perceived fools.

So, we heard Crawford say, rightly so, that he wasn’t looking past the Lithuanian. Those two didn’t have a charged dynamic during the presser, or during the stare-down, understandable more so because Egis is also a Top Rank fighter. So, no, Bud didn’t seek to stir the pot, maybe juice ticket sales, which seem lackluster, by engaging in mock ferocity at his challenger…or by calling out the Shawn Porters or other PBC talent.

It was left to Arum to be the chief pot stirrer. He delivered, as per usual. Three days after he turned 88, the Brooklyn born “Bobfather” opined that Andy Ruiz looked like a “fat pig who can’t move, who can’t do anything” on the scale and in the ring against Anthony Joshua on Dec. 7, called Ruiz’ prep a disgrace to the sport, and he also gave some thoughts on the state of the sport.

It demanded attention and snagged buzz and spotlight because, as ever, he is provocative in his speech and in his theorizing. For one, Arum made an interesting point about the well being of the sport, through the lens of selling tickets to bouts. He didn’t come out and say that sales for this card were tepid, but he did say he’s seen the trend. It’s been harder to fill the barns, and he put forth THAT a large reason is that not one newspaper has a full time boxing writer/reporter on staff. In the UK, yes, here, no. And yes, you saw the videographers, and the web boys and, in general, the shrinkage that has arrived in the last ten to five years at MSG on Wednesday.

He’s not wrong, and to add to his point, the number of papers, period, has shrunk. Industry consolidation and carnage overall, with a major paper shutting about once a month, means that we aren’t going back to the glory days of coverage, quite likely, or not at least till the next Mike Tyson explodes onto the blood and sweat-stained stages.

“A fight really doesn’t sell unless it’s close to 50-50,” he shared. That draws betting action, more interest. He said the Saturday undercard tango pitting Richard Commey, the IBF 135 champ, against Teofimo Lopez is a 50-50 type clash.

Here’s the problem, “we can’t sell tickets to fights.” Placing fighters outside of their home zones, that’s a harder sell. Yep, he can place Crawford in Omaha, they sell well there. But that isn’t a major market, and less press goes to that location. More people like the comfort of home, their sofa and their own snack stash. “I tell my matchmakers, I tell everybody, let’s shoot as much as possible for 50-50 fights. Can’t do it all the time, you got these mandatories, they’re never 50-50, but you gotta try!”

He thundered that with no full time boxing writers at papers, “how the fuck do you sell tickets?” Yeah, it’s hard to sell tix to this MSG card, he allowed.

And with the advanced tech, and the DVR and the ability to replay and run it back, has that impacted in the building sales? He sort of said yes and no. You can see the action better on the TV, at home…and that’s the same for football, in the NFL. But people still go to those games, to get closer to the action, feel the vibe, soak up the color. 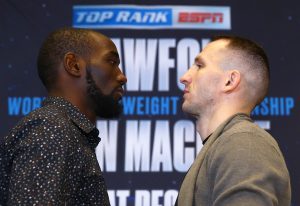 He said he thinks boxing is strong, “I think people are making good matches,” and he likes that there is interest outside the US for the product. He thinks TR will do at least ten major cards other countries next year. He runs in China, not Macau as they tried with Zou Shiming, early next year.

He said that non 50-50 fights hurt entities, some more than others. He said that “Showtime does not belong in boxing,” and they should just offer regular entertainment fare. In boxing, “you open and close the same night,” he said. So, it makes for Showtime to spend money on a series, which could catch on with more masses than A grade boxing could.

Crawford looked happy to be taking part in this fight week. “I’m not focused on no other opponent besides the opponent that’s in front of me,” the 32 year old hitter said in the freer-form presser, without a dais, presided over by Crystina Poncher. “My goal is to make sure I get the victory come this weekend, and that’s the only person I’m focused on now. Anyone else is talk. It goes in one ear and out the other. He’s young, hungry and I’m not taking him lightly.”

And his foe was also seeming happy to be alive. “Going straight ahead to Crawford is not an option because he’s too smart and he showed in his last fight that he’s smart in the ring,” the Lithuanian stated. “So, yeah, we’ll work on my combinations. We don’t want to go very wild at him.”

The press seemed more curious about the Commey vs. Lopez pairing than the main event. No wonder–last year Lopez was the IT prospect, and he backtracked some this year, as he dealt with changed family dynamics after getting married. His dad is still head trainer, but things are smoother, as he’s more confident about setting boundaries. Also, the presence of calming soother Joey Gamache in this camp, to help Teofimo Sr. has paid off. “I think everybody needs something like that,” he said of his last outing, against Masayoshi Nakatani in July. “I needed that. Everything happens for a reason. I take everything they try to throw at me negatively and turn it into a positive. You can’t faze me. You can’t bring me down. I’m here for a reason. Teofimo is doing what he’s doing come Saturday night. We’re going to go out there and take over. I have vengeance in me. I’m holding that, holding everything. I want to shut everyone up the best way I can, and that’s doing what I do best.”

A Michael Conlan vs. Vladimir Nikitin 10 rounder, in the featherweight class, will kick off the ESPN portion of the card. Conlan showed his charm and poise in talking about how this fight against an Olympic rival is business, not personal.

My three cents: More pondering on the ticket sale deal. The guaranteed money and relatively long term deals between promoters and major league platforms reduce the import of NEEDING to fill a building. Funds to deliver product, for screening, is going to come, and often the gate is of much lesser import. But that does have an affect–atmosphere suffers when a building is 50 percent or less full. Also, fighters should be able to summon a cadre of rooters, ideally, people who are invested in their arc. And too often, these days, fighters aren’t able to do that. And is that because boxing is more passe? Or the promotion of the athletes, and their own ability to contribute to that, could be more vibrant.