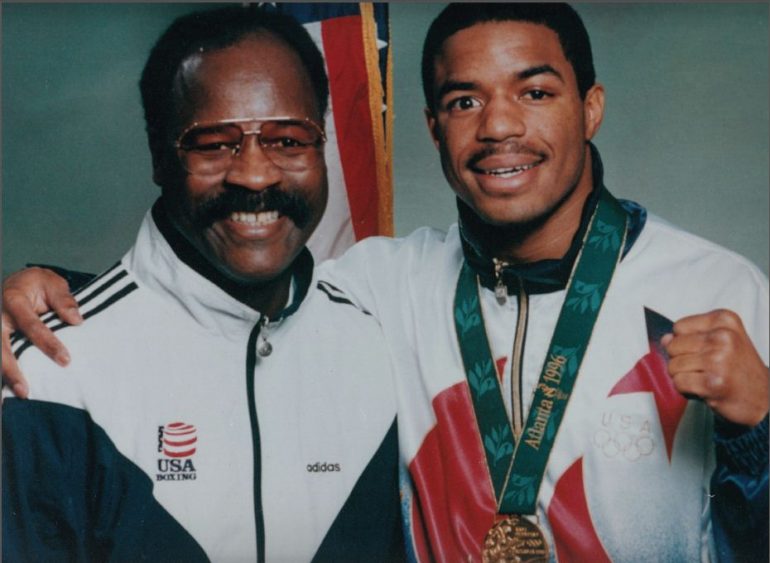 On Friday, trainer Al Mitchell will be honored for more than 60 years of service to boxing when he’s inducted into the USA Boxing Alumni Association Hall of Fame, during a special class of 2019 ceremony, at Golden Nugget Hotel & Casino in Lake Charles, Louisiana.

Mitchell was the head coach of the 1996 U.S. Olympic team, and a technical advisor for the 2004 and 2012 squads. He has worked with an eye-popping 800-plus national amateur champions and three profesional world champions.

“I’m very honored and happy to have USA Boxing put me in its Hall of Fame,” Mitchell told The Ring. “I want to thank all the coaches who worked under me and all the young fighters I’ve worked with.”

Mitchell was born in Philadelphia on October 31, 1943. He was the oldest of seven children. While other family members became ministers, Mitchell found boxing.

He spent a lot of time with Joe Frazier, Bennie Briscoe, Al Massey and his cousin Gypsy Joe Harris at the Police Athletic Gym.

“Things were tough, we were poor,” Mitchell recalled. “I belonged to a gang and got locked up for 18 months when I was 15. I had about 10 fights at Holmesburg Prison, where Bernard Hopkins went. I was there before him.

Mitchell went an impressive 43-1 as an amateur, but there wasn’t a clear path for him to make the step into the professional game.

“Back then, if you weren’t welterweight, middleweight or heavyweight in Philadelphia, you weren’t going to make any money,” Mitchell explained. “The only offer I had was a deal for $250 to go to California. I weighed 109, 110, no more than 114. I used to go and box guys at 130 and beat them, but it wasn’t worth it. I was helping my mom. My father was in the services and he died – he never recovered from the Vietnam war.”

Entering the restaurant business, Mitchell remained in boxing as a trainer. His first world titleholder was Charlie “Choo Choo” Brown who won the IBF belt in 1984. Mitchell was offered a position at N. Michigan University in 1989, it was only supposed to be for a month but he is still there today.

Since then, Mitchell has worked with a who’s who in the amateurs. In the professional game, he took the late Vernon Forrest to world titles in two weight classes and also steered David Reid from Olympic glory to a WBA junior middleweight belt.

The 76-year-old Mitchell is divorced and has five children. He lives in Marquette, Michigan where he trains (middleweight southpaw) Chris Pearson and (unbeaten female junior lightweight) Mikaela Mayer. He also helps children at his gym.

“My ex-wife told me that all I know is boxing,” he said. “I go and train them at the gym, and I travel with them. That’s what I like to do.”

He graciously took time to speak to The Ring about the best he trained in 10 key categories.

BEST JAB
Vernon Forrest: Vernon Forrest and Andre Ward. I’d probably pick Vernon. He could use it going to the right, to the left, he could use it going to the body and the head. Very rarely you see someone who can do that. Also, off that jab he had a good hook. He used the jab as a range-finder for that right hand and he’d throw the hook or uppercut, so he used it for distance. He used it to measure for that right hand.

DEFENSE
Floyd Mayweather Jr.: Andre Ward looked like nothing when you watched him on the outside; he didn’t look like he had anything but that intuition, that boxing I.Q. where he saw things before they happened. He wasn’t outstanding in his jab or punch, but he had that good smart defense. The other one who I had in the 1996 Olympics, but he didn’t show me until he was professional, was Mayweather. But Andre Ward was slick, look at the tournaments he won, he did it with good smart defense and he knew when to punch. He saw things before they happened. Probably Floyd. All round skills. In action fights, I’d probably take Andre Ward. Too much defense and it gets boring. But Andre Ward makes things happen to expose you. They’re two exceptional, different style boxers: good offense, good defense, smart in the ring. I’m just glad I got to see them both.

HANDSPEED
Meldrick Taylor: Meldrick Taylor was on the Philadelphia team in 1980 that I took him to the nationals. He had the fastest hands I’d ever seen. He ended up getting gold at the (1984 Los Angeles) Olympic games. His handspeed was crazy fast. So many good guys I’ve dealt with. Teaunce Shepherd; he only had four fights as a pro and won them all. He quit because his face would swell up, but he won the Goodwill games. His handspeed was unbelievable.

FOOTWORK
Brian Viloria: One of the guys I saw was Pernell Whitaker, but he wasn’t on any of my teams. David Reid had some unbelievable footwork. Brian Viloria was always there to punch, his footwork was so good. We had the 2000 team hit a bag to judge power and he was the littlest guy but, pound-for-pound, he hit the bag harder than anyone. That was because of the way he sat with his feet.

SMARTEST
Ward: Two guys I worked with, Andre Ward and Vernon Forrest. Again, Andre didn’t look like nothing, but he had that ring I.Q. And Vernon, if he didn’t have them injuries on his shoulder, there’s no telling how good he could have become. He had good ring intelligence. It’s tough to pick, but I’d probably go with Andre Ward.

STRONGEST
DaVarryl Williamson: Williamson played football for college, and Jermain Taylor made the Olympic team and got a bronze. DaVarryl was older; he was 27 when I got him, he had that man strength – very strong. I had to make him only use the jab hand in sparring. Jermain Taylor for a junior middleweight (156-pound division in the amateurs) was a very strong guy.

BEST PUNCHER
Williamson: Again, DaVarryl Williams, Brian Viloria and Jermain Taylor. DaVarryl was a hard puncher. He wasn’t technically sound, but if he cracked you, you were gone. I trained him for about five years, and I wouldn’t let him throw the right hand.

BEST CHIN
David Reid: He had a good chin. He fought (Felix) Trinidad, who hit him with some good shots. He never got stopped as an amateur or a professional, until his last fight. The (drooping) eyelid hurt him; it would come down and cover his eye. We got it stitched up a couple times and it still came down. He won the title in his 12th fight and, in his 15th fight, he fought Trinidad. He was winning the first seven rounds until he decided he wanted to knock Trinidad out and went toe-to-toe.

BEST OVERALL
Mayweather and Ward: I’d probably pick Floyd and Andre Ward. The reason why, the best defense is Mayweather. The best offense off of defense is Andre Ward. Both of them find a way to win. Ward had some hard fights and made them look easy. Those two are exceptional. Once every 20 years you get a fighter you put on a pedestal and say: What would happen if both were the same weight? I’ve got them both neck and neck. I’d have both even.