Richard Commey: ‘Teofimo Lopez is very talented, so I will not be taking him lightly’

Commey, who is rated No. 1 by The Ring at 135 pounds behind champion Vasiliy Lomachenko, is confident of turning back the challenge of the highly-regarded Lopez.

“My thoughts are the same as always, I am going in there to win and retain my title,” Commey (29-2, 26 knockouts) told The Ring.

“To be honest, I have not seen a lot of him. I leave all that to my trainer. I trust him to come up with a game plan, which I train hard for, and as long as I execute it properly, I will come away victorious. It has worked so far.”

Although Commey isn’t the type of fighter to watch tape on his opponent, he did see Lopez fight live earlier this year.

“My co-manager Michael Amoo-Bediako took me to MSG to see him fight Edis Tatli,” said the 32-year-old Ghanaian. “Tatli did not put up much of a challenge, so (Lopez) was hard to assess on that. But from what everyone is saying, he is a very talented boxer, so I will not be taking him lightly.” 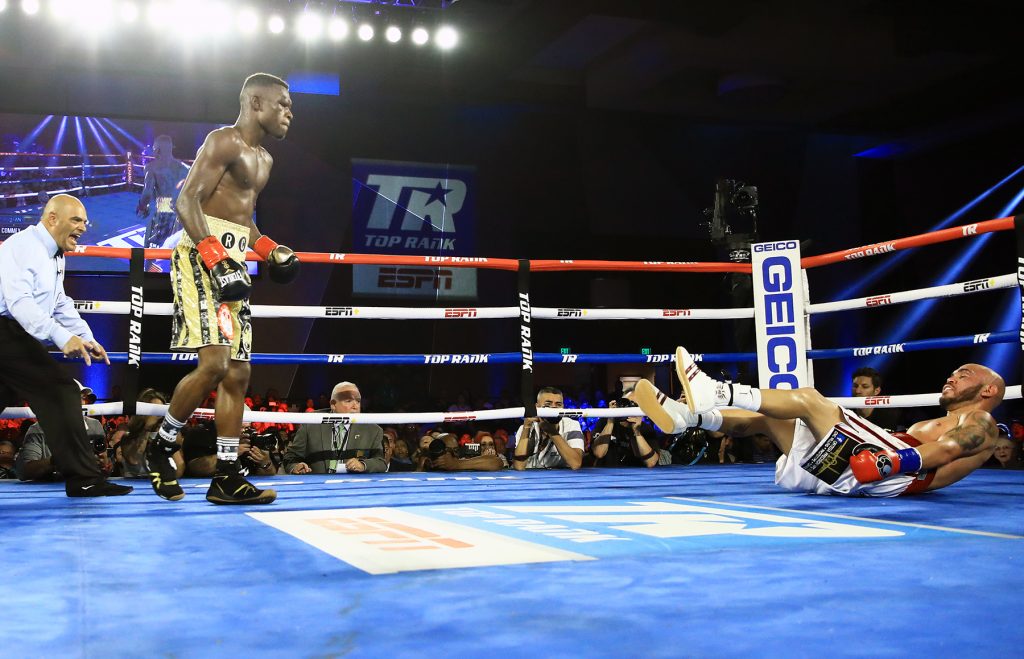 Commey scored four knockdowns of Beltran before the fight was stopped. Photo by Mikey Williams/Top Rank

Lopez (14-0, 11 KOs) turned professional in November 2016 after an impressive amateur career took him all the way to the Rio 2016 Olympics. The heavily courted prospect wasted little time moving up the pro ladder and was voted The Ring Magazine Prospect of the Year in 2018. He carried that momentum into this year, stopping Diego Magdaleno and Tatli, before besting Masayoshi Nakatani on points to earn his title shot.

Commey is well aware of the hype surrounding Lopez but remains undeterred.

“It seems to me that every young prospect is taking over boxing since Floyd Mayweather (Jr.) retired,” said Commey. “They all seem to forget the long hard road Floyd took before he became a pay-per-view star, so that’s a big statement to make.

“With me, I just want to win fights and titles, and when I retire people can decide how good I was. I have no desire to take over boxing, I just want to be a successful part of this wonderful sport we are in.”

His long-term manager, Michael Amoo-Bediako, has battled hard to get Commey the attention he deserves.

“It has been a long hard road to get Richard where he is today,” said Amoo-Bediako. “We have had some bad luck and fallen foul of boxing politics at times. This added to the fact that Richard is Ghanaian has made the journey even tougher than I ever imagined, but I have to thank Lou DiBella. When Richard was released by his former promoters, after suffering two back-to-back heartbreaking split decision defeats against Robert Easter Jnr. and Denis Shafikov, Lou was the only one to reach out to me to sign Richard. This has enabled Richard to realize his goal of becoming a world champion.

“Now that Richard has this platform on December 14th, he will be able to show the world why he has been the most avoided lightweight in the division.”