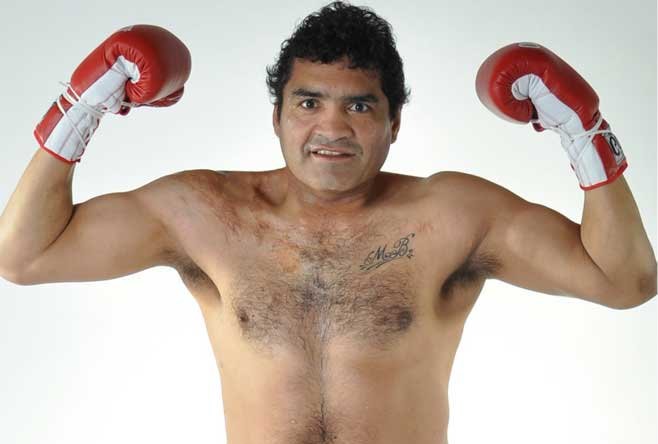 He is a “throwback” fighter. An “iron-chinned” warrior. An awkward “brawler”, a “KO artist”, and more.

But in his native Argentina, he is defined by the two interchangeable nicknames that, to this day, people yell out when he walks the streets: “Roña” (Dirt) and “Locomotora” (Locomotive).

“They used to call me ‘busca roña’ when I was a kid,” said Castro, 52, in explaining the longer, full version of the moniker he earned as a pre-teen street hustler, from which his shorter nick derives. “Dirt-seeker” would be a literal translation, but the true meaning is closer to “troublemaker” or “bully”, a kid who is constantly looking for a wrong comment or a bad look from anybody just to start a fight.

As the years went by, both nicks helped define his non-stop, take-no-prisoners approach to boxing, a style that earned him, at one point, the honor of being the active fighter with the most KO victories in the world.

Born in Caleta Olivia, Santa Cruz, in the desolate and barren Patagonia region of Argentina, Castro famously had his first amateur bout only three days after his first ever sparring session. “I went to a gym on a Tuesday, and then a fight scheduled for Friday was suspended and they called me. ‘Roña, do you want this fight?,’ they said, but I had only one day of training in my life. But I was a street fighter. If someone gave me a bad look in the streets, I’d challenge them to a fight. That’s how I was.”

“On Thursday, they gave me a piece of paper for my mom to sign, a permit. I asked her ‘Mom, can you sign here for me so I can get a fight?’ and she said, ‘What fight you’re talking about? Go to school!’. So, I went to a neighbor, a lady that rented a house next door, and I said ‘Dora, can you sign this for me?’ and she said ‘Yes, sure!’. On Friday I was fighting already.”

After getting paid and comparing his fee with the meager amounts he made shining shoes and selling newspapers, the 121-pound Castro ended up fighting every week, landing in Buenos Aires less than three years later with little more than bus fare in his pocket and making it all the way to the national team.

“I turned pro at 18”, reminisced Castro. “You couldn’t become a pro at 18, you had to be 20 years old, but since I defeated the (amateur) world champion from Cuba, my trainer spoke to the president of the local federation and they gave me the license.”

Castro debunks the rumor, persistently repeated throughout the web, that he had an almost-career-threatening bike accident at this stage of his life, and claims that his 128 fights as an amateur paved the way for what became a meteoric professional career in which he logged 144 bouts between 1987 and 2007.

His breakout bout was a spectacular nine-round thriller in Castro’s debut at the most famous boxing venue south of the equator, when he took on Miguel Angel Arroyo in December 1989, in a neighborhood bragging rights brawl that became known as “The fight of the fluorescent gloves”, thanks to the glowing yellow mitts worn by both fighters.

“That was my best fight up to that point, against ‘Puma’ Arroyo’”, said Castro. “I fought him at a sold-out Luna Park, and I won by KO in the ninth. We were the two top prospects in Argentina at that time, and that was my big break”.

But the biggest victory was yet to come. Thirteen years after the Arroyo fight, Castro traveled to Mexico to defend his newly-acquired WBA middleweight belt against one of its former owners, John David Jackson, in what would be a career-defining triumph.

“I don’t know what happened to me that night,” recalled Castro. “Because I was not the kind of guy that fought Jackson that night. I was a guy who enjoyed going in and throwing a lot of punches, but in that fight he beat the shit out of me. Lefties were always difficult for me. He always landed before I could throw a punch. He didn’t punch hard, he had hands of cotton, but he threw and landed a lot of punches, and that caused my eye to swell and then to cut.”

An explosive straight left caused the swelling on his left eye to burst in the seventh, and Castro was subsequently blind for the next couple of rounds while his corner worked frantically to stop the bleeding.

“The (ringside) doctor came up after the eighth round and said ‘You can’t go on,’ but (manager and cornerman) Luis Spada told him ‘You gotta give him the ‘champion’s round’. And that one (the ninth) ended up being the champion’s round!”

After being pummeled all over the ring by an emboldened Jackson, who thought for a minute that his brittle hands would succeed in stopping Castro (a task which stronger punchers such as Terry Norris and Roy Jones had already failed to accomplish), the champ claims that he made Jackson believe he was hurt. He retreated to the ropes and shelled himself up in order to draw Jackson into range.

“It was in those milliseconds that I had to decide what to do,” said Castro. “I decided to go backwards and play dead, but I wasn’t hurt. They always say that if you are hurt you can punch harder, because you feel desperate. But my power came naturally. I ended up with 90 KOs in 144 fights. But that was my toughest fight; I got the crap beaten out of me, but I was able to come back and get the stoppage,” said Castro, who emerged from his defensive shell two minutes into the round and missed a wild right before connecting with a follow-up left hook on the chin of Jackson, who fell backwards for the first of three visits to the canvas that ultimately put an end to his challenge. To cap off this sensational victory, the bout won The Ring Round of the Year (9) and Fight of the Year (1994).

In spite of the legendary status that this fight brought to Castro, the tough-as-nails warrior, who was stopped only twice (once by a cruiserweight titleholder, and the other at the end of his career after a comeback which followed a devastating car crash) remembers the bout with less fondness than his fans.

“I always say that if I am born again I wouldn’t wish I had another fight like that one. I don’t want to get hit so much just to land one final punch.”

Castro had 15 children with an assortment of wives and mistresses. He built or purchased a house for each one of them. Most of them still live in the Patagonia region, in southern Argentina. He lives in the town of Temperley, a suburb of Buenos Aires.

After his retirement, he became a beloved celebrity in Argentina, appearing in countless talk shows, interviews and TV programs, including the local version of “Big Brother – Celebrity Edition.” He drove (and oftentimes crashed) every motor sports vehicle imaginable, from go-karts to motorcycles (he claims to have traveled the 1135 miles that separate his hometown from Buenos Aires in only 11 hours on a motorcycle, clocking 190 miles per hour during long stretches of the desolate road) and racing cars in different categories. In 2005 he crashed his car against a tree and spent 21 days in a coma. In 2000, he was sentenced to three years in prison (later suspended) for vehicular manslaughter following a 1995 crash in which his female companion was killed in the town of Pico Truncado.

Today he is an “event host”, organizing boxing events all over the country under the auspices of several labor unions, government agencies and private parties. He worked with young athletes in the national Olympic training center during a 12-year run in which the Kirchner family (Nestor first, his wife Cristina later) were in power in Argentina but was fired four years ago when recently defeated president Macri took power. He expects to return to that job next year after the new government is sworn in.

Here is a rundown of the best fighters he faced in each category, as he remembered them for The Ring in a recent interview in Buenos Aires.

Juan Carlos Gomez. And obviously, Roy Jones Jr. He was accurate and landed hard jabs too.

Roy Jones: I didn’t give him any respect. I threw everything I had at him, but he covered up very well, especially upstairs. He opened up his body only, but you couldn’t land one punch in the head against him. Roy Jones had won every fight by knockout, and I was the first one to go the 10-round distance with him. I connected my punches too, but I was fighting in Pensacola, his hometown. He thought he could stop me, but he couldn’t. he could punch real hard.

John David Jackson: He was fast and landed everything. His jab was fast. It was continuous and accurate. He always landed his punches, all of them.

Roy Jones. He was very slippery, but when he fought me he was different. I threw a lot of punches and he covered himself very well, but against other fighters he would take the lead. Against me, he had to be on the defensive all the time, and he adapted very well to that.

Juan Carlos Gomez: He was the biggest fighter I faced, and I was just a chubby old guy. We fought at cruiserweight, the heaviest I ever fought. We had an 18-pound difference, and it was too much.

Francisco Bobadilla: I got tired from punching him so much, and he didn’t move an inch. I fought him four times, and I always beat him on points. I threw everything I had at him. (Hector Abel “Perro”) Lescano was tough too. I knocked him out, but he was tough. And (Juan) Italo Meza as well. I punched him with all my strength, and he kept coming.

Juan Carlos Gomez. I think I fought in Australia with him (Note: They fought in Essen, Germany), and he knocked me down. And also the (guy against whom) I lost here by knockout (Panama’s José Luis Herrera). What happened in that fight is after my (car) accident, I thought my body was fine, but I was hurt inside. As soon as he hit me on the chin, he knocked me out. But in my best moment I would have knocked him out. But Gomez hit so hard I had to take a knee. And in the body, I’d say (Shinji) Takehara, he hit me hard to the body. But with Gomez I felt every hand, whenever he landed I saw little stars shining all over the place. He was much bigger than me and I was just a chubby little bastard.

Terry Norris: I fought him at his absolute prime. He was very fast, way too fast for me. He was a complete fighter. You couldn’t catch him in the ring. He was a good boxer, he didn’t just go toe-to-toe with you. He fought at a distance, a smart fighter. He had defeated Sugar Ray Leonard. I thought I was going to fight Leonard too, but I ended up fighting Duran later.

Roy Jones: Hands down. He had it all: he could punch, he could fight going forward and backwards, he was a complete fighter. Jackson was different, he was fast but didn’t have it all. Jones was one of the best pound-for-pound, but I managed to take the lead in that fight and put him on the spot. They never thought I would be crazy enough to take the fight to him, but I did.