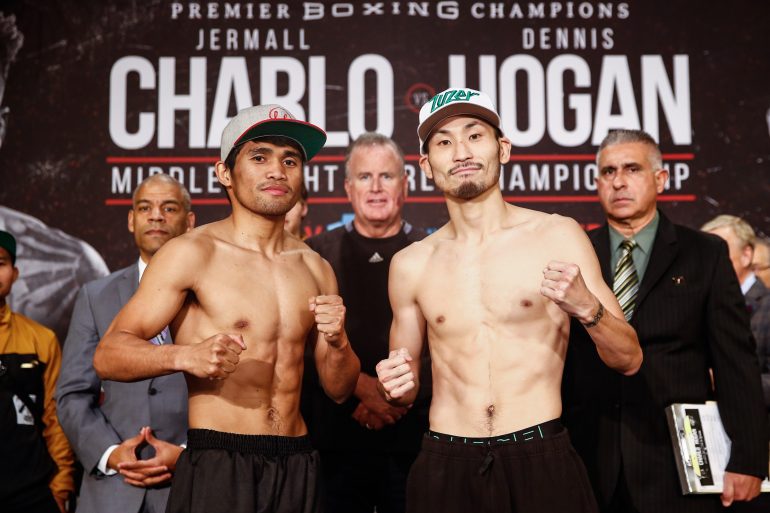 Ryosuke Iwasa used his superior jab – and ultimately, a straight left hand – to put Marlon Tapales down in the eleventh round to earn a technical knockout win Saturday night at Barclays Center in Brooklyn, N.Y.

Iwasa (27-3, 17 knockouts) of Kashiwa, Chiba, Japan takes home the interim IBF junior featherweight title with the victory, putting himself in a mandatory position for one of the belts held by WBA/IBF unified titleholder Daniel Roman.

The 29-year-old Iwasa had previously held the full IBF title, winning it with a sixth round knockout of Yukinori Oguni in 2017, before losing it to TJ Doheny in his second defense a year later. The loss sets back Tapales (33-3, 16 KOs) of Lanao del Norte province in the Philippines, who had won three straight since losing his WBO bantamweight title in 2017 after missing weight for his first title defense against Shohei Omori.

Tapales was ruled knocked down in the third following a head clash, which referee Shada Murdaugh ruled incorrectly was a punch. The head clash resulted in a nasty swelling on the right side of Tapales’ face, and gave Iwasa a spot to target with his left hand.

Tapales didn’t waver, and returned the following round with body punches against his leaner opponent. By the fifth, Tapales was able to use his opponent’s aggression against him, landing a whistling right uppercut, and a few sneaky left hand counters.

Iwasa’s superior technique began to pay off in the seventh, as he used his jab to set up combinations and pummel Tapales from range, while Tapales resorted to trying for one big punch at a time. Iwasa continued to have success by pressuring Tapales and stepping back when Tapales lunged in with his solo shots, taking one bigger punch to land several smaller blows.

The finish came at 1:09 of the eleventh, as Tapales got caught with a straight left hand over his lowered right. Tapales beat the count but did not convince the referee he could continue, leading to his first defeat after 12 straight wins, and his second by stoppage, following his 2009 loss to Brix Ray.

The fight opened up the Showtime Championship Boxing card that is headlined by Jermall Charlo vs. Dennis Hogan.