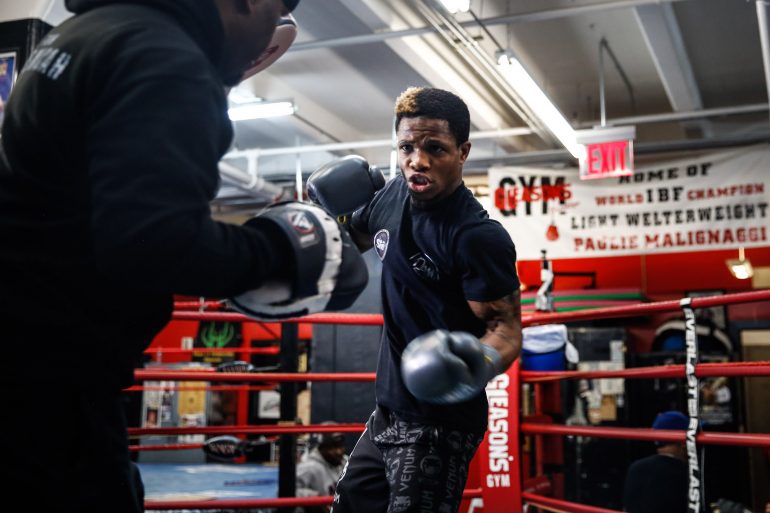 Heavyweight prospect Steven Torres (1-0, 1 knockout) annihilated Daniel Felix Franco (2-3, 2 KOs) by first round knockout to win his professional debut on the Jermall Charlo-Dennis Hogan undercard at Barclays Center in Brooklyn, NY. The official time of the stoppage was 2:09 of the opening round.

The 21-year-old Torres stands 6’7’’ and overpowered Franco with heavy-handed combinations for which the Mexican fighter had no answer. Torres unleashed a huge right hand which dropped Franco early in the opening stanza. Franco got back to his feet was, but was not nearly on steady legs.

Torres allowed Franco to land some looping rights to earn the right to go inside and test Franco’s belly. After 2 hooks to the body, Torres unloaded back up top connecting freely. Franco finally had enough and took a knee prompting the referee to waive the bout off.

Micah, a 2012 Ghanaian Olympian, scored the first knockdown of the bout in second round sending Rvera down with a sharp left hook. Rivera recovered well enough to come back and drop Micah in the next round. Micah tried to feint unsuccessfully and Rivera timed him well and tagged Micah with a right cross. Micah smiled and got back up with ease.

Moments later Micah unloaded a three-punch combination to drop the Puerto Rican Rivera. Rivera took a few moments to compose himself before reaching his feet.

Micah did not allow himself to become careless again and controlled the distance of the bout with his jab and footwork. Rivera attempted to press the action in the sixth round, but Micah made him pay with another sharp combination punctuated by a left hook.

This is Micah’s second bout of 2019 after signing with PBC which ended a 14-month layoff. Micah, who hails from the same neighborhood as Azumah Nelson, Ike Quartey and Joshua Clottey, defeated Luis Roy Suarez Cruz this past August in Minnesota. Micah lost to Michael in Conlan in the second round of the 2012 London Games.

The 27-year-old Rashidi was unable to get back in the win column with a less than spirited effort against Sanchez, who more than just an opponent tonight. Sanchez buzzed Rashidi several times in the bout, including the second round when Rashidi ate two right hooks that sent him into the ropes and almost down.

Sanchez found success again in the third round but was unable to put Rashidi away and allowed him to get back into the fight with a right uppercut to stun the Puerto Rican native. Rashidi, once promising prospect, is coming off an upset unanimous decision loss to Alfonso Olvera this past September on the Errol Spence-Shawn Porter undercard.

In the opening bout of the evening super middleweight prospect Burley Brooks (5-0, 4 KOs) defeated Nathan Davis Sharp (4-2, 4 KOs) by unanimous decision. The official scores at ringside were 58-56 on all three cards.

Brooks sported a three inch height advantage over Sharp and used his jab to control the tempo of the fight. After a quick start Brooks took his foot off the gas in the third and fourth rounds before regaining control and stunning Sharp with an uppercut. The Dallas native is a sparring partner of Errol Spence’s and signed to Man Down Promotions.