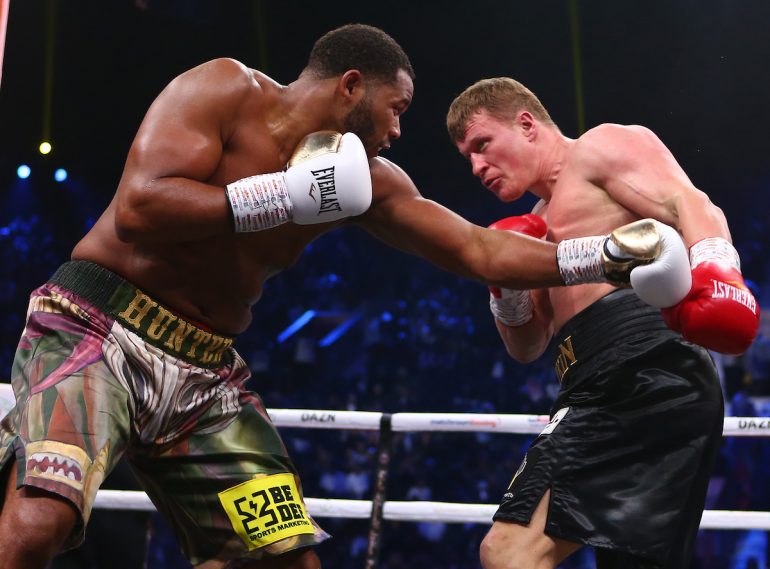 American heavyweight contender Michael Hunter and former world title challenger Alexander Povetkin put on a good show over 12 rounds at the Diriyah Arena in Diriyah, Saudi Arabia, but the judges were unable to find a winner. The official result was a split decision draw with 115-113 cards being awarded to both fighters and a 114-114 card making it all even.

Hunter, who moved up to heavyweight from the cruiserweight division in 2017, rocked the Russian veteran twice in the opening round with sharp right hands and quick combinations. He was unable to finish the job, however, and fans were treated to a highly competitive fight.

“I don’t make the scores, so I don’t know what to say,” said Hunter in his post-fight interview with Sky Sports. “I just have to get back to drawing board. I thought I did enough (to win), but obviously the judges didn’t think so. I hope that we have another chance to fight him again. I don’t like to leave any stone unturned, so I definitely want to do it again.”

Following a habitually slow start, Povetkin came to life in the fifth when he landed two powerful left hooks that dazed the American and drove into the ropes. The naturally bigger man looked to be on the ascendancy, but another impressive burst from Hunter in the seventh swung momentum back in his favor.

Povetkin, who was rated No. 7 by The Ring at heavyweight coming in, began to tire in the late rounds due to some excellent body work by Hunter, whose hand speed was impressive. It was the work downstairs that set up another vicious assault in Round 11, and the Russian came perilously close to being stopped.

The final round was untidy and devoid of the quality action that preceded it. The Ring had Hunter winning 7-5.