Gray Matter: Never take your eyes off an opponent, even when they’re down 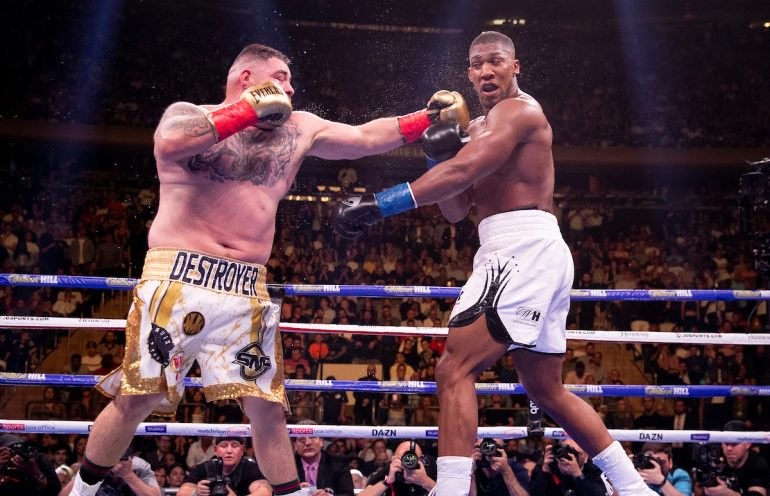 Lying on my sofa, those were my exact words as unified heavyweight titleholder Anthony Joshua marched towards Andy Ruiz after the latter had picked himself up from a heavy two-punch knockdown in the third-round of their June 1 encounter at Madison Square Garden.

Why did I say that?

Well, when Joshua nailed Ruiz with the perfect right uppercut-left hook combination, a brilliantly adept cameraman followed the challenger to the floor, and I got a good look at him on a 65-inch TV. Momentarily startled, Ruiz, who had never been down before, was fully aware of his surroundings. In less than two seconds, his eyes were clear, his equilibrium spot on and he stayed calm.

Joshua missed all of that because he’d walked to a neutral corner with his back turned – and that was a grave error. When the action resumed, the Englishman began hurling bombs at Ruiz, who was more than happy to return fire. The challenger absorbed a cannonball right-hand shot from Joshua during that exchange, but he also landed a brutal left hook that ultimately changed the course of heavyweight history, as well as the fight. Joshua went down, hurt badly, and Ruiz would go on to prevail via seventh-round stoppage.

Now, if you ever get the time, revisit Juan Manuel Marquez’s thrilling sixth-round knockout of Manny Pacquiao in December 2012. On both occasions when Marquez decks the Filipino icon (Round 3 and Round 6), he walks backwards to the neutral corner. Not once does he take his eyes off Pacquiao, not even for a split-second. Why? Because he’s performing a professional risk assessment. How hurt is he? Is he wobbly? Should I go in for the finish? Should I wait?

The effects of a clean knockdown differ widely. A fighter can be knocked off their feet by shots, as Ruiz was in June, or they can be hurt badly by the impact of the punch landing on a vulnerable spot and/ or their head striking the canvas. If they’re simply knocked off their feet, then recovery can be almost immediate, and that means the fighter remains dangerous – very dangerous. Conversely, if a fighter is seriously hurt, their equilibrium may be shot, or they may have a feeling inside their skull like someone is squeezing their brain. I’ve suffered the latter after tripping over a punch and it sucks. Have you ever seen a fighter close their eyes tight after being dropped? A good example is Evander Holyfield being decked by John Ruiz in Round 11 of their second fight in 2001. “The Real Deal” is having a brain squeeze moment there.

Joe Frazier was once asked why he didn’t show more urgency when on the verge of stopping a wobbly Muhammad Ali in the 11th round of their epic first encounter in 1971. “Once you hurt a man, he’s dangerous,” said the great former heavyweight champion in an interview with NBC in 1991. “You need to be very careful about how you approach him.”

Proof of what “Smokin’” Joe said turned up in a 2009 junior welterweight bout between Victor Ortiz and Marcos Maidana. Midway through Round 1, Ortiz overwhelmed the Argentinian slugger with a fierce two-fisted barrage, punctuated by a southpaw right hook which floored him. Tough as nails, Maidana was up in a flash, he walked over to Ortiz and knocked him flat on his ass with a vicious right to the chin. A big underdog, Maidana would go on to win by sixth-round stoppage.

Some of the best finishers in the game were also very patient. Think Roberto Duran and Joe Louis; they would never rush a finish, never overreach, never take a crazy chance to get an early shower. They would analyze the situation, stay professional and let things take their course. No matter what happens in Saudi Arabia today, if Joshua gets Ruiz off his feet again, don’t expect the same haphazard approach. That lesson was learned the hard way.

Never take your eyes off an opponent, even when they’re down!