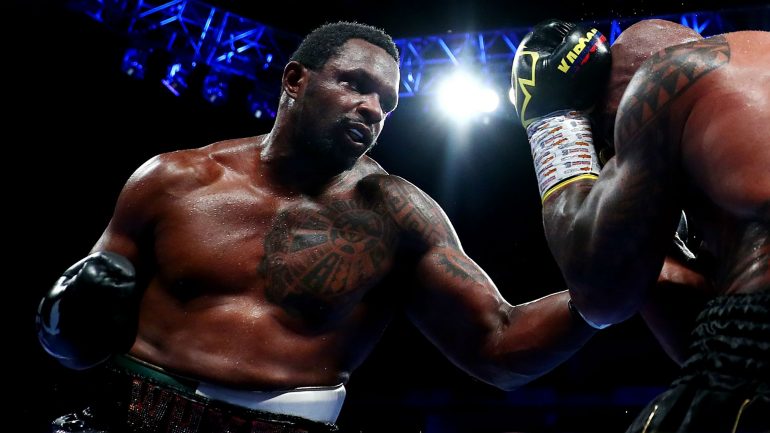 Heavyweight contender Dillian Whyte has been cleared of all charges against him for testing positive for a banned substance earlier this year, with United Kingdom Anti-Doping ruling that his positive test was due to contamination.

The joint announcement was released Friday by UKAD and by Dillian Whyte on his social media accounts.

Whyte (26-1, 18 knockouts) will face Mariusz Wach (35-5, 19 KOs) of Poland Saturday night at the Diriyah Arena in Diriyah, Saudi Arabia. The 10-round bout will precede the rematch between Andy Ruiz and Anthony Joshua for the unified heavyweight title.

Whyte, who is ranked No. 5 by The Ring, made headlines on June 17, when UKAD announced Whyte tested positive for Dianabol, a banned substance. Whyte was still allowed to face previously-unbeaten Oscar Rivas on July 20 in his hometown of London, overcoming a knockdown in round nine to win by unanimous decision.

Despite the win over Rivas, the WBC removed him from Whyte from their rankings. Whyte had been the mandatory challenger to face WBC titleholder Deontay Wilder.

In a bizarre twist, the Voluntary Anti-Doping Agency (VADA) informed both Whyte and Rivas on Aug. 1 that tests done before and after the fight for banned substances came back negative.

The UKAD, which had received criticism over the last several weeks, acknowledged “certain confidential information relating to this matter (including the fact of the initial charge) has unfortunately made its way into the public domain.”

“UKAD and Mr. Whyte have agreed to take the unusual step of releasing the following limited information to put an end to speculation concerning Mr. Whyte’s status,” continued UKAD in the statement.

The main case details in Friday’s announcement point out:

– “There is nothing in Mr. Whyte’s longitudinal urinary profile that he has used steroids.”

– “Mr. Whyte had provided a urine sample to VADA on June 17, 2019, i.e. 3 days before his June 20 sample, which was tested by a WADA-accredited laboratory and which returned a negative result, including for metabolites in question.

– “Mr. Whyte provided several other doping control samples to UKAD and VADA between June 20 and July 20, 2019 (i.e. the date of his fight with Oscar Rivas) – all of which also tested negatives.

– In light of the above points, the trace amounts of metabolites found in the June 20 sample are consistent with an isolated contamination event, and they are not suggestive of doping.”

UKAD also announced the British Boxing Board of Control (BBBC) has been informed of the resolutions of the proceedings against Mr. Whyte.

Having proclaimed his innocence from the original accusations since June, Whyte also made an ominous announcement Friday on social media.

“For those who believed in me I won’t forget you. To those who didn’t, I won’t forgive you and I know who you are. #bodysnatcher #no1”

Whyte is promoted by Eddie Hearn.