Espinoza says Showtime will be involved in big fights: ‘Our schedule will speak for itself’ 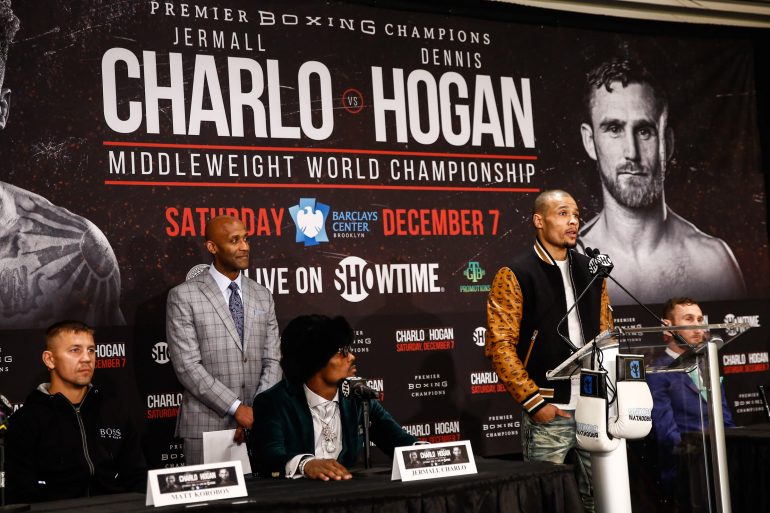 Showtime boxing boss Stephen Espinoza took to the mic at a Thursday presser to hype the Showtime Championship Boxing card on Saturday night, which unfolds at Barclays Center.

The cable chief at the Grand Ballroom at the Tillary Hotel Brooklyn said that he thinks maybe Jermall Charlo, in the main event versus recent 154-pounder Dennis Hogan (28-2-1, 7 knockouts), is the best middleweight, bar none. Some on social media look issue, and I saw a couple guffaws. I asked Espinoza to talk a bit more about that stance.

“I absolutely think there are very good arguments to make to say that..his skills, experience, athleticism, power, I think he’s a tough matchup for anyone in the division,” Espinoza said. And, when you think about it, it’s possible Canelo is a 168 now…and with GGG being 37, you look at a Jermall vs. Gennadiy Golovkin matchup today much differently than they did two years ago.

But, the best way to prove that is for Jermall, age 29, to secure one of those step-up marquee matches, yes?

Espinoa didn’t disagree. He said that, “one of reasons I’m so convinced of his skills and the respect he generates in other fighters is I know none of them are stepping up to the plate. If he were to get a career making offer for one of those elusive fights I wouldn’t stand in his way of doing whatever he needs to do to get that.” I asked, let’s name names…who has been dodging Jermall? Espinoza said that he knows that there were serious talks about a Jermall versus Demetrius Andrade bout. “Whether that happens long term or not remains to be seen,” he stated. He also said that the political warring between promoters and platforms is used as cover sometimes for not getting fights made. “Jermall is willing to take on all comers,” Espinoza, a Texas native, declared.

You possibly know that other 160-pounders are on this Charlo-Hogan card. Chris Eubank Jr (28-2, 21 KOs), with those strong pugilism genes from dad Chris Sr, is making his American debut. The 30 year old has had a spotty career, but says the move from 168 to 160 will pay dividends. He said he wants to down foe Matt Korobov (28-2-1, 14 KOs), who he admitted is a solid test, and then take over the division. Gimme the big names, the Canelos, GGGs, I want the smoke and fire, he declared at the presser.

So, Mr. Espinoza, are you setting up a Jermall (29-0, 21 KOs) versus Eubank scrap for next? Not so fast; Espinoza pointed out that Dennis Hogan will beg to differ that Jermall is in a gimme fight. Also, “I know it’s a cliche, but I think Korobov-Eubank is a 50-50 fight. Whoever wins is well positioned to fight Charlo if not next then the near future,” the executive said.

And yes, as a TV executive he does a Mr. Burns hands-rub of glee to ponder a Jermall vs. Eubank lead-up. “I’m not sure we could schedule a press conference long enough, for how they can talk!”

Espinoza noted that he’s happy that this bout is being shown. He said that no, Eubank can’t make a proper impression in America without taking on a respected foe. “In today’s competitive market, that’s how you can make a mark.”

All in all, Espinoza said he’s happy that the three fights on Sho, and the two streaming before all have the capability of being solid action fights.

And speaking of action…This has been that year of transition in the sport, for some more than others. The PBC-FOX hookup has indeed made it so Sho had more of a holding pattern year. They weren’t involved in the last Deontay Wilder fight, that PPV against Luis Ortiz. Espinoza had said that he didn’t want to land that fight, really, because the risk-reward ratio wasn’t to his liking. And it looks, maybe, like his reasoning proved to be prescient. We’ve heard industry insiders peg the buys for the Wilder vs. Ortiz rematch at 150,000. Bob Arum said he heard 200-250,000, Dan Rafael said he was told 225,000 while Jake Donovan said he was told 275,000+,  plus a healthy gate attracted a sizable take for the Nov. 23 tango.

“I think it was tough to sell a pay per view while people are looking forward to a bigger matchup, Wilder versus Fury. If it was the Ortiz rematch on Showtime or on PPV, you have everyone salivating for the Fury fight, so I think the Nov. 23 fight didn’t get its due attention and business…it’s a tough position as a PPV.”

And how about this tidbit? Espinoza said “we look forward getting back into the Deontay business again very shortly.”

For the record, yes, Espinoza did take in those comments made by FOX exec Bill Wanger. The Fox man said that he expects to get the best of class fights and that Showtime won’t so much, from the PBC roster.

It’s been about a year since FOX did a deal with PBC, one of the megabucks variety. To that end, FOX has been getting the good stuff from PBC over Showtime, a longtime partner with the Al Haymon enterprise. Haymon was doing a time-buy model and didn’t succeed in that push but did, however, sell FOX on the viability of the sport.

Wanger told Mannix that he and FOX built a great relationship with the reclusive impresario and the executive has drawn buzz off this hit.

Wanger said Haymon and company are the matchmakers and the FOX people give their input. Wanger focuses on the pathway, the way forward, the longer term plan. He said FOX is in “the premier position,” as opposed to Showtime, and he said the “biggest fights” will be with FOX. Yes, he sees Showtime as a “partner” but, I admit, I found myself thinking, “With partners like these…..”

Mannix asked how much pre-determination is involved regarding fighters fighting any given platform. Does he feel safe in that FOX doesn’t have contracts with individual fighters? Wanger said they are contracted with PBC, to “be in the premier position.” He repeated that term, “premier position.”

“At the end of the day, we get the best fights” and “the top stars.” And he added that Showtime won’t.

“It was surprising to hear those kinds of words,” Espinoza said. “Those kind of things doesn’t jibe with the reality recently, or in the near future. There are pretty good fights, enough to go around. I’m not gonna belabor the point, but our schedule will speak for itself.”