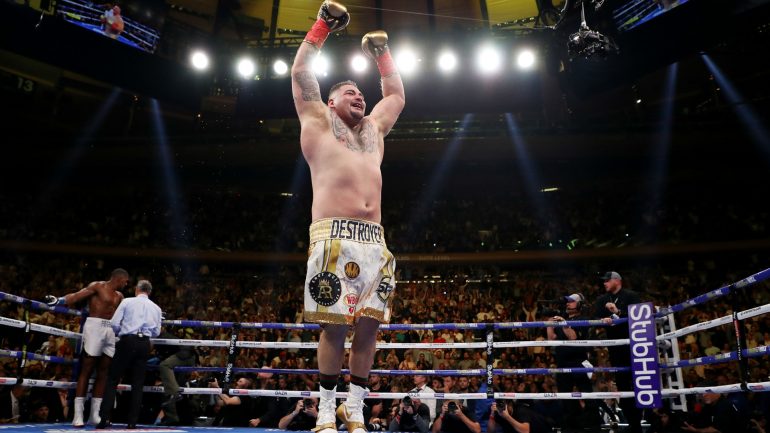 One thing is certain, Manny Robles confirmed on Thursday during a media conference call: Andy Ruiz, who Robles trains, is indeed in Saudi Arabia.

The problem was, Ruiz was supposed to be on the call and couldn’t be found.

So, the very able Robles stepped in to answer questions from the media about his fighter, who threw the world for a loop last June 1, at Madison Square Garden by pulling off a monumental upset in stopping Joshua at 1:27 of the seventh round. Ruiz overcame a third-round knockdown to knock walking Greek sculpture Joshua down twice in third and twice more in the seventh round.

On Thursday, Robles played the role of trying to convince the assembled media that Ruiz can do it again.

There was just one rather interesting point Robles made when asked about Ruiz during an underachieving spell early in his career when he was with Top Rank. Ruiz was not fighting, nor training, the way Top Rank wanted. That translated to the ring, where there were questions about Ruiz’s motivation, and certainly about his inability to perform at the level Top Rank envisioned.

Ruiz, up until his fifth-round stoppage of Alexander Dimitrenko in April, was viewed largely as a disappointment.

“I believe that,” Robles said. “A lot of it was mental, trying to get the best Andy Ruiz. It’s something that I work on daily with Andy. Obviously now, it’s a little bit easier, because he’s the heavyweight champion of the world. Before that, it wasn’t so easy, because it was hard for him to believe in himself.

“It’s something that he has to work on and I do that on a daily basis with him. It’s a psychological process I guess that you have to be able to get him to believe. I’ve been watching Andy fight since he was an amateur. I knew of him for a very long time. So when I was asked to start working with him, I knew exactly what I was dealing with. You get to know the person. I learned what was in his mind and the way he thinks.

“Bringing out the best Andy Ruiz possible has been my job and always been my homework. Again, as I said before, I’m not done yet. I still believe Andy has a lot more to give and a lot more to offer.”

Robles stressed that the three-month training camp this time has been a big help in preparation for Joshua, as opposed to the five-week camp the 29-year-old from Imperial, California, had the first time.

In the last fight, Robles said the third round was telling because it proved Ruiz could take Joshua’s power, and, it proved to Joshua that Ruiz can get up from taking a big shot.

“Not knowing Andy Ruiz, that was a big mistake, because Andy Ruiz is a complete fighter who has a chin,” Robles said. “He has heart, which is something you can’t teach and he’s used to fighting guys like Anthony Joshua. One thing that we’ve been working on quite a bit has been his defense. Overall, with him being more aggressive and being a combination puncher, it’s defense and footwork, and angles. You’ll be able to see that Saturday night.

“You’ll see more of Andy Ruiz as far as him being an overall fighter.”

Asked if they could win a fight on the scorecards, Robles immediately dismissed, saying it’s something he doesn’t even think about. “I’m just hoping we get a fair shake,” said Robles, who pointed out there were prefight press conferences in Mexico or California. “That has to tell you something. This isn’t our show. This is the Anthony Joshua show. It’s his promoter, Matchroom Boxing, Eddie Hearn. Obviously, I’m hoping we get a fair shake. We’ll do our best to go out there and try and win this fight, and hopefully, the judges will call the right fight, and hopefully do what’s right.”

Robles said Ruiz will be coming home with the belts.

Joshua said he’ll come into the fight lighter than the 247¾ pounds he came in on June 1. Ruiz came in at 268 in the first fight, and Robles feels Ruiz will come in at the same weight.

“I’m curious to see how Joshua reacts,” Robles said. “If you’ve been around the game for a while, you understand that most boxers aren’t able to recuperate (from how Joshua lost the first time). Go back to the Meldrick Taylor-Julio Cesar Chavez fight, where the first fight was a great fight. Meldrick Taylor was very close to winning that fight until he got stopped in the very last second. Everyone talks about the first fight, but they don’t talk about the second fight.

“Julio Cesar Chavez came in and defeated him easy the second time around. Taylor wasn’t the same fighter in the second fight. I’m curious to see how Anthony Joshua will look. We’re going to try and make this a fight. Mike Tyson liked to say everyone has a plan until they get hit in the face. I’d like to see what happens when Anthony Joshua gets hit for the first time.”

It’s a matter of what Andy Ruiz shows up.

But he is in Saudi Arabia.