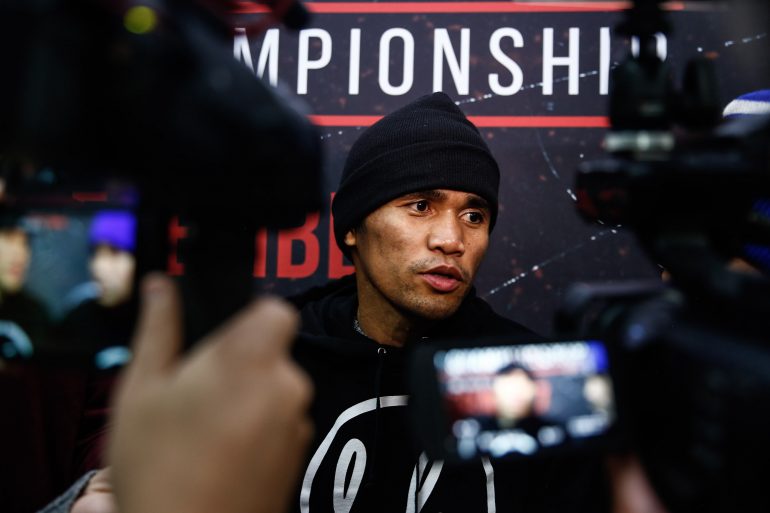 NEW YORK — After being knocked down twice in his 2016 world title challenge against Pungluang Sor Singyu, Marlon Tapales got a boost of inspiration from an unexpected source: his mother Maria. She had flown with him to Thailand for his WBO bantamweight title fight, and, to Tapales’ surprise, didn’t hide her face and cry when body punches crumpled him to the floor in the fifth.

Tapales recovered and knocked Sor Singyu down the following round, then did it again in the eleventh to claim the world title. His mom won’t be in attendance for his fight on Saturday against Ryosuke Iwasa (26-3, 16 KOs) at the Barclays Center in Brooklyn, N.Y., but he’ll have plenty of motivation as it is.

The fight, which will open the Showtime Championship Boxing broadcast headlined by Jermall Charlo vs. Dennis Hogan, will be contested for the IBF interim junior featherweight title, with the winner to become the next mandatory challenger for WBA/IBF titleholder Daniel Roman, bringing Tapales one step closer to a second world title reign.

His bantamweight title run ended abruptly, after he missed weight by two pounds for his first defense against Shohei Omori. He lost the belt, but won the fight, overcoming a flat start to finish the resilient Japanese fighter in the eleventh. Tapales would miss 19 months afterwards, during which he’d have plenty of time to think about his career.

“I was very disappointed for myself,” said Tapales, speaking in English that he mostly taught himself by watching American movies and talking to himself in practice conversations. Sitting in his New York hotel room, he rubbed his legs to stay warm. He says he learned a valuable lesson in Japan about cutting weight before traveling to a cold city to fight, and says he was just two pounds over the 122-pound limit by Wednesday.

Boxing has been something he’s learned mostly through trial and error. Born and raised in Lanao del Norte province in the Philippines, he’s one of eight children – five boys and three girls. His mother Maria was a daycare teacher, and his father Emilio worked on a rice farm, making 150 pesos (about $3 USD) a day. He picked up boxing from one of his friends at age 12, while working on a pig farm, washing and feeding the livestock. His older brothers would provide him with gloves and mouthpieces, though he was mostly self trained.

He says he didn’t have any formal amateur experience, but had about 30 informal barangay fights, fighting other kids of all heights and weights, without headgear or mouthpieces, with a circle of people placing bets on the action serving as the ring. The loser would take home 20 pesos, and the winner would earn 30 pesos. Tapales says he didn’t do a lot of losing.

“They don’t know boxing, maybe they just play basketball. I will kill them all,” said Tapales. He eventually went to a boxing gym to learn timing and the basics, but what he needed to know about punching came from fighting for pesos in what he described as a human cockfighting pit.

Life was hard for Tapales and his family, so Tapales dropped out of high school at age 15 to turn pro in 2008. He suffered his first defeat in his ninth pro fight, being stopped by Brix Ray in the sixth, but quickly accelerated his learning curve, defeating future world title challengers Randy Petalcorin and Warlito Parrenas, plus national champ-to-be Jerson Mancio over the next year or so. His only other defeat came in 2013, a majority decision loss to David Sanchez in Mexico.

He’s won 12 straight since then, including three since the post-Omori layoff, with the last two coming in California on Premier Boxing Champions cards, through promoter MP Promotions, which is run by Manny Pacquiao and matchmaker Sean Gibbons. 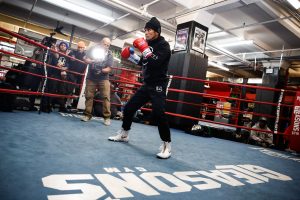 “[Pacquiao] sends some messages through social media so it’ll encourage Marlon to do his best for the country,” said trainer Rodel Mayol, a former WBC junior flyweight champion himself, who fought Ivan Calderon in New York City in 2009. Also in town to support Tapales are manager Rex “Wakee” Salud, plus Gerry Penalosa, a two-time world champion in his own right, and Ernel Fontanilla, a former pro from the Philippines based in Los Angeles who is now an assistant of Mayol. Brendan Gibbons also accompanied Tapales, in lieu of his father Sean, who is in Mexico with Jerwin Ancajas for his title defense against Miguel Gonzalez on Saturday, plus Troy Kovacs, an Australian friend of Tapales’.

Mayol says Tapales “worked like a buffalo” during their two-month training camp in Las Vegas and Los Angeles, where he worked alongside compatriots like John Riel Casimero, who recently won the WBO bantamweight title with a knockout of Zolani Tete. Mayol says the style matchup against Iwasa, 29, of Kashiwa, Japan meshes well with Tapales, who, like Iwasa, is also a southpaw.

“This match up is good for us. Marlon likes Iwasa’s style that stays in front and is not running,” said Mayol. Casimero adds that he believes Tapales still has it in him to win another world title, saying Tapales “worked hard in training for this fight.”

Iwasa had won the IBF junior featherweight title in 2017 by stopping Yukinori Oguni in six rounds but lost it in his second defense to TJ Doheny a year later. He last fought in February, winning a technical decision over Cesar Juarez on the same card Tapales stopped Fernando Vargas Parra in five rounds. Iwasa is listed at nearly 5’8”, which is about four inches taller than Tapales, though he says he has plenty of experience fighting taller fighters, as was the case against Omori.

“I know that I’m facing a very skilled opponent with good power but I’m not worried about what he does in the ring. I’m going to make him miss and land my best shots,” said Iwasa.

Tapales says he’s not thinking of facing Roman yet, and hasn’t seen any videos of him fighting. His whole focus is on Iwasa.

“First I have to win in this fight, Iwasa is not an easy fighter,” said Tapales.