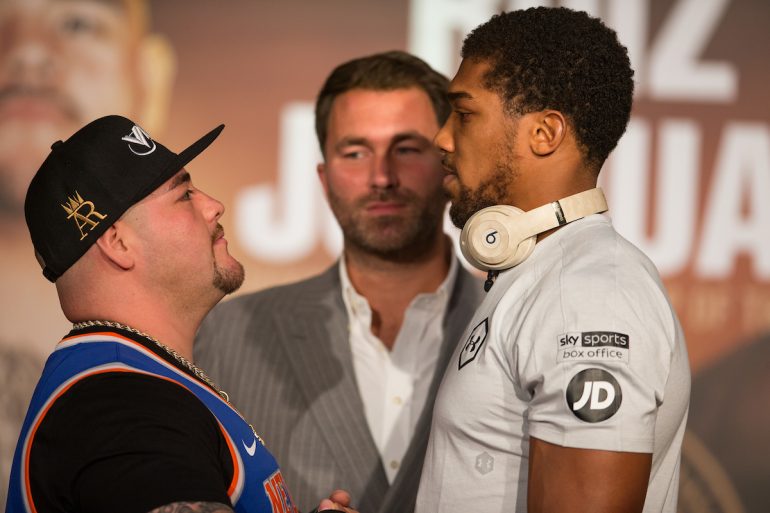 On importance of keeping the belts: “It’s been a long three months of camp. I’ve been training really hard for this fight. Like June 1, I made history, and I think the importance is to remake history on Dec. 7 in Saudi Arabia. Not much to say, but I’m ready to rock androll, I know AJ is going to come in with a different game plan. I know he’s prepared, motivated, being more cautious – I know he’s going to try and box me around. My job is to prepare for whatever comes my way.”

On if the motivation is still there: “Of course, I don’t want these beautiful belts to go away. Remember I’ve been doing this since I was six, it’s finally paying off, and no way I’m going let these belts go. I’m going to die trying, and do anything that’s possible to get that victory. It’s been a long journey, long roller coaster in my life, and no way I’m going to let these go Dec. 7. Let the best man win.”

On this being a great opportunity: “It’s interesting to be on this side of the table, as you said in my 16th fight, I challenged for the world title, challenged for the title again with Klitschko, then Parker, and now I’m challenging again, so this is my fourth title challenge in a short space of time. I’m used to being in this position, and even when you’re champion, I think Andy being a respected heavyweight he knows you have to have the challenge and mindset. All these quotes that these fighters come up with is reality, challenger mindset. I’ve said that previously when I had the belts around my waist. Now I’m speaking this into existence, this is my challenge and mindset. So I’m going back to my 16th fight, focused and determined on the goal.”

On feeling less pressure without the belts: “I’ve been boxing a while now, and when I came into boxing I didn’t really come to take part, I came to take over. I came with full force, fully committed. The focus has already been there, but never had a chance to reflect. It was European Championships, Olympics Championships, British Title, World Championships. I’m not here to put on show I’m here to win. I’ve been around the block for a short space of time, so you have to understand I’m experienced and know what I’m doing. Through reflection in my own time, me and Andy are very different, but like everyone in this room we have time. I just have to use my time and as soon as I got back from New York I got that commitment back, got into shape, I didn’t lose any heart, didn’t lose any fire in my belly, started hitting the heavy bag, preparing for this day. I’m actually really looking forward to it. No fear in my heart, no fear in my eyes. I’m just looking forward to putting on a show, and I’m confident.”

On how special a win will be: “I was asked if this will be a special moment and I said no because I know I belong there. It’s not special, I’ve been there, I know what I’m doing. When I regain those belts I will probably keep calm and stay focused. It’s not a time to celebrate, it’s time to keep that challenge, mindset and find the next target, so one by one I’m picking them off. I’ve been doing that since I started boxing and Ruiz is just my next target on my list.”

On fighting in Saudi Arabia: “This the Mecca of boxing I’m hearing. The real Mecca of boxing. I’m going to turn this into something special, a real event. As you can see we have put together a great undercard and a great show. I went to the venue, its perfect, perfectly designed, said my prayers, I took time to really embrace what’s going to happen Saturday. I’m just going in with confidence, and I want everyone to have that same confidence and have a great time.” 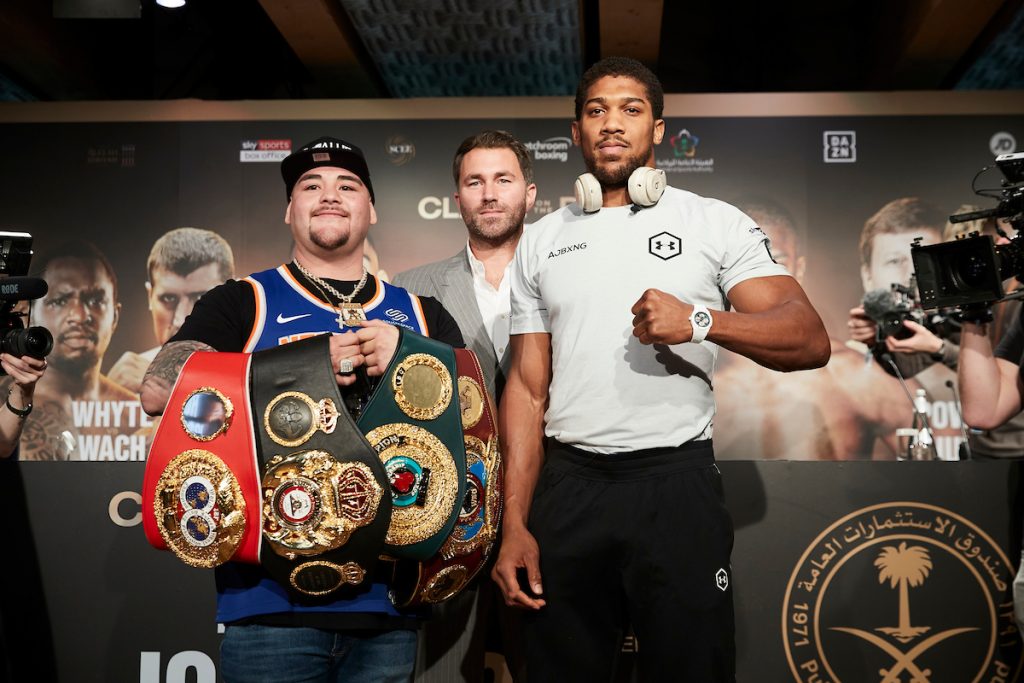 On defending belts: “It’s been three months of preparation which is something we didn’t have for the last fight. I’m very pleased to say we had a great camp, perfect sparring partners, perfect time, perfect time to prepare to come up with a better game plan. Understand we have a very difficult task in front of us. We respect him, and we know he’s a great fighter. We’re going to be ready for the task. Andy has a had a great camp, and mentally and physically prepared for the challenge. We look forward to it. I hope no one walks away disappointed Saturday night.”

On mindset going into this fight: “Anthony is in a much better place than last time at this stage, and I’m much happier with where he’s at. Everybody has said his training camp has gone really well. We’ve been training well out here in Saudi. Anthony has been training at the British Embassy, he’s got his own facility, and able to train diligently and hard. Listen we know how good Ruiz is, we know he’s a top heavyweight fighter, and he’s the champion. We’re totally confident, completely different mood going into this fight than back in New York. And I think you will see the real AJ for sure.”

On having more time to train: “For Andy Ruiz we had about five week notice for the last fight, at the same time Anthony’s opponent pulled out, so we had to restructure and change things, but with Ruiz’s ability that isn’t easy to do, but that isn’t a excuse. The right man won on the night, they both had 12 weeks to prepare for this fight, I think it’s a level playing field now. I think Anthony knows exactly what is in front of him, the sparring partners have been tailored to suit what Andy does. I think it you will see the real AJ on Saturday night and see a great performance.” 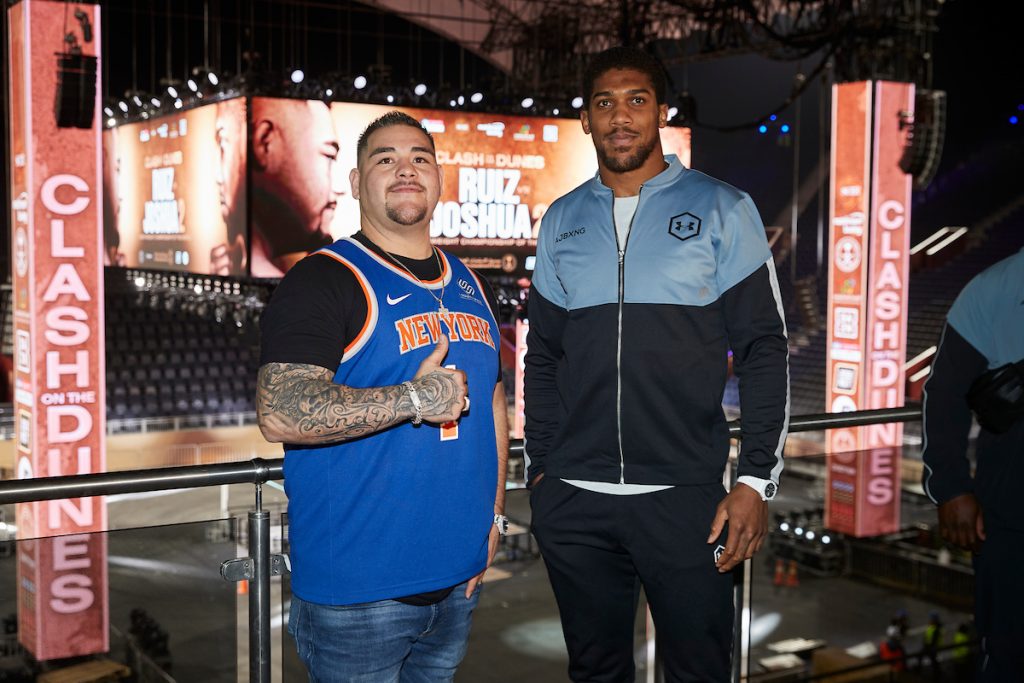 “We talked about our friend Neil Leifer who is here with us in Riyadh. Neil was on the canvas taking photos for the “Thrilla in Manila” and the “Rumble in Jungle” and on Saturday, he will be there for “Clash On The Dunes.” It will be another historic night for the sport of boxing and a heavyweight that will go down as one of the biggest ever. Andy Ruiz shocked the world in New York in June and now they enter this fight totally differently – Ruiz is the champion and Anthony Joshua is the challenger. This fight has everything.

“We were very close to going to Cardiff, and very close to taking this rematch back to Madison Square Garden in New York. We even looked at Mexico. I had finally made the decision to keep the fight in the UK but then I got the call from Saudi. I think I was quite rude at first actually, I told them not to waste their time because we were taking the fight to Cardiff. But the passion they had to bring this fight to Saudi Arabia was unmatched and within four or five days, we have an agreement to stage this fight here. Sometimes there was shock and criticism, but this was an absolutely wonderful decision. The hospitality from the Kingdom of Saudi Arabia has been incredible. The fighters have had an amazing experience here with first class facilities being specifically built for them to prepare. The is a new dawn for the sport of boxing.

“We are thankful for our friends at DAZN. Just one year in, they have completely changed the face of boxing in America. Look at the names they have already brought to their wonderful platform: Anthony Joshua, Andy Ruiz, Oleksandr Usyk, Canelo Alvarez, Gennadiy Golovkin, and the list goes on and on. It is a wonderful time to be involved with the DAZN business and there’s such a bright future ahead for them.”

“There has been some magical and memorable nights of boxing on Sky watching so many greats. We then embarked on the journey with Anthony Joshua since he won his gold medal in London and he has been such a great ambassador for the sport.

“What a fight we had back in June and now how we love a rematch. This will be the biggest night for us of the year and we will make sure this dazzles in a wonderful new arena.

“What happens who knows! You cannot pick a winner.”