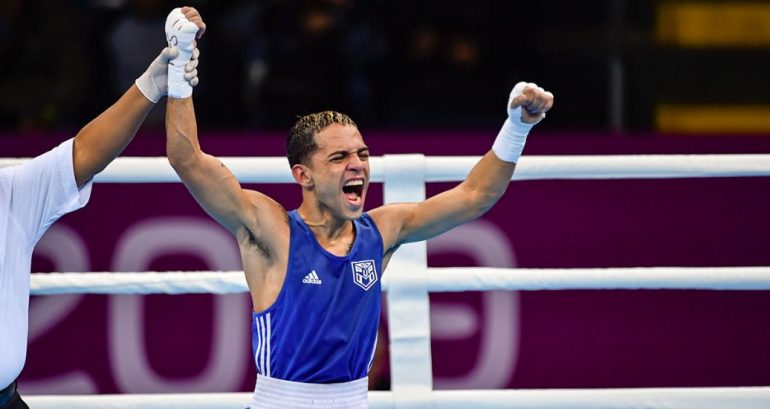 CAGUAS, PUERTO RICO (Dec. 3, 2019): Fresh off his gold medal win at the 2019 Pan-American Games in Lima, Peru, standout Puerto Rican prospect Oscar “The Pupil” Collazo has decided to set aside his Olympic aspirations and begin his professional career by signing with Miguel Cotto Promotions and H2 Entertainment in association with Golden Boy. Collazo, who was one of six athletes to bring a gold medal to Puerto Rico from Lima, Peru and the only one to have done so in the sport of boxing, will make his professional debut on Feb. 15 during the first Miguel Cotto Promotions card of 2020.

“I’m a little anxious for my debut. I have great plans,” said Collazo, who had over 140 fights as an amateur. “I want to be the face of boxing in Puerto Rico, and I have the tools to do that. By signing with Miguel Cotto Promotions, I have come to the right places to accomplish those plans.”

“We had many offers on the table, but the best offer was definitely from Miguel Cotto Promotions. Aside from the fact that Miguel had a great career as a boxer, I think we have joined a promoter that can help develop us. It’s enough to see how many world champions they’ve had in [Angel] “Tito” Acosta and [Alberto] Machado, along with many various regional champions. They have a great squadron of prospects. Being with a promoter like that really motivates me.”

Indeed, having someone like ‘Tito’ Acosta is one of the aspects that intrigues Collazo, as he is a fighter who has campaigned on world level in the division that he aspires to reign over in the future. “Acosta would be a great training and sparring partner. He has already been on big stages in professional boxing, and now I have someone I can learn and gain experience from,” opined the 22-year-old native of Villalba.

“We have always been a faithful believer that as an amateur boxer you must have a complete experience because it gives you the tools to be successful at a professional level. Oscar Collazo is a natural talent and has what it takes to be a world champion in the near future,” said Miguel Cotto, President of Miguel Cotto Promotions.

“Oscar Collazo has great talent, and we are very content and enthused that he has put his trust in us to work together. Oscar Collazo will be a world champion,” said Héctor Soto, Vice President and promoter of Miguel Cotto Promotions y H2 Entertainment.

“Golden Boy has crowned several Puerto Rican world champions in the past few years because of our great partnership with Miguel Cotto Promotions,” said Oscar De La Hoya, Chairman and CEO of Golden Boy. “And now with this new signing, I’m sure that we’ll be developing several more in the near future. Oscar Collazo is a standout talent at mini flyweight, a division where we have hosted many exciting fights in recent months. We look forward jointly promoting this young boxer with our friends at Miguel Cotto Promotions.”