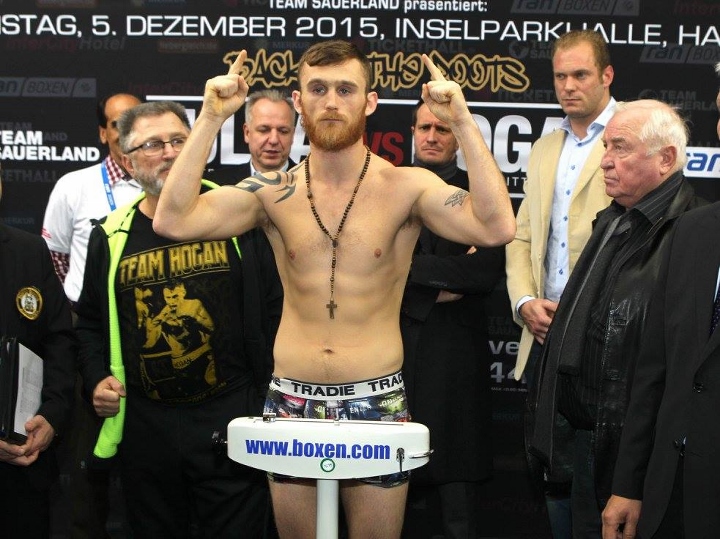 Dennis Hogan says he’s over the controversial April loss to Jaime Munguia, and that he’s ready to step up and fight at a new weight, when he meets WBC middleweight beltholder Jermall Charlo (29-0, 21 knockouts) on Saturday night on Showtime Championship Boxing (9 p.m. ET/6 p.m. PT) from Barclays Center.

“After the Munguia fight, in training, we’ve actually learned a lot, so you’ll actually see me twice as good than I was in the Munguia fight,” said Hogan when addressing gathered media during a conference call on Monday afternoon. “I’ve made all of the changes to become a much more rounded fighter. I’ve put so much work on, and I’m actually proud of myself, which I’ve never said about myself before.

“It’s a little heartbreaking (the Munguia fight), but I’ve put that in the back of my mind.”

The 34-year-old born in Ireland, Hogan (28-2-1, 7 KOs) said he had grown in the flow of winning before the Munguia fight, and has grown to become a more aggressive fighter, in terms of being fit and not be hit.

Hogan said he feels more powerful at 160, and that, moving forward, middleweight will be his weight.

“There are some big fights in that division, but first and foremost, I’m looking forward to Jermall Charlo. That’s where my focus lies. There are people coming to see me fight, and when you get there Saturday night, it will sound like I’m the A-side fighter.”

Hogan vowed he’s about to make a dream come true.

Charlo, 29, said he’s ready to defend the title, and that he’s coming with something explosive that “Dennis Hogan will remember for the rest of his life.” He promised to bring fans the “best Jermall Charlo they’ll see.”

“I’m young, I’m still learning and I enjoy in my career,” Charlo said. “We don’t get paid for overtime, so I’m here to get him out of there. I don’t want you to think that I’m overlooking Dennis Hogan. He’s been on the calendar for a while.

“Dennis Hogan can talk a good game about being a world champion. That’s what you’re supposed to do when you’re hungry. He can claim A-side, B-side, any side, it doesn’t matter, I can fight on any side. Don’t think I’m overlooking Dennis Hogan. I’m looking to be the best Jermall Charlo there is.

Despite Charlo’s success, he feels he’s still overlooking when it comes to crossover fans.

“I’m one of the best fighters in the division, I’m the WBC champ, I’m 29-0, with 21 knockouts and I’ve had my share of greatness,” Charlo said. “I feel good where I am. I’m avoided. Some people want to fight me. It comes with boxing.

“It’s not something that comes overnight. Throughout the time in my career, you get your ups and downs. This fight is different, this guy wants to trade shots with me. I have to be able to do what Jermall Charlo does best and make adjustments.”

Charlo promised Hogan won’t be a different fighter than he was in his last fight—which happened to be Hogan’s best performance as a pro, even though he lost.

“Dennis Hogan has a lot of natural attributes I feel we can exploit, and no one else wants to fight me,” Charlo said.