Andy Ruiz vs. Anthony Joshua 2 – The rematch tested against history 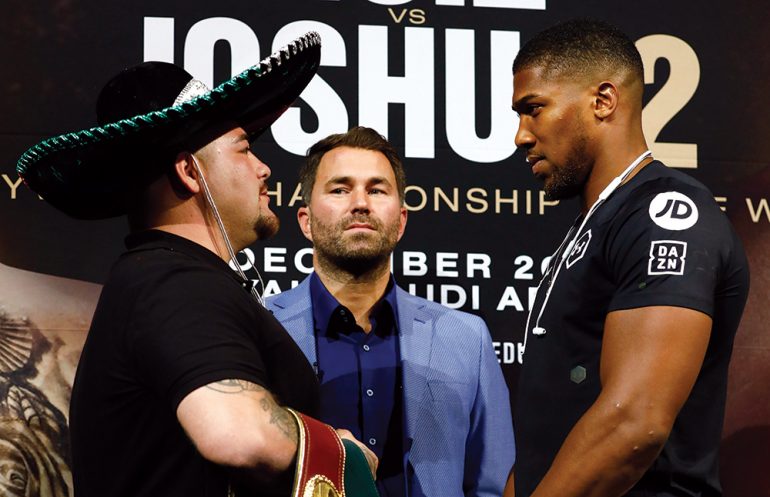 In June, a heavily-favored Joshua made his U.S. debut against Ruiz at Madison Square Garden. The former Olympic champion had been due to face Jarrell Miller until the bombastic American incredibly failed a trio of pre-fight drugs tests and Ruiz stepped in at a little over month’s notice to save the show. Nobody gave the 30-year-old Mexican American a chance to pull the upset.

However, in one of the biggest surprises in heavyweight championship history, Ruiz rose from a third-round knockdown to drop Joshua four times, bludgeoning him to a seventh-round stoppage defeat that shocked the world.

Joshua quickly decided to enforce his rematch clause and now bids to regain the titles and his reputation as an elite heavyweight force.

Over the decades, several heavyweights have faced off in world title rematches. Here we look at five who were able to regain and five who fell short.

June 21, 1932 – Jack Sharkey SD 15 Max Schmeling: Sharkey had outboxed Schmeling for three rounds in their first encounter before a low blow resulted in a disqualification loss in June 1930. The pair faced off again, and this time Sharkey edged matters by highly controversial 15-round split decision

September 15, 1978 – Muhammad Ali UD 15 Leon Spinks: Seven months earlier fledgling professional Spinks outpointed “The Greatest” via 15 round split decision. For the return, Ali, 36, whipped himself into shape and became the first fighter to win the heavyweight championship on three occasions, soundly outboxing Spinks en route to a 15-round unanimous decision in New Orleans. 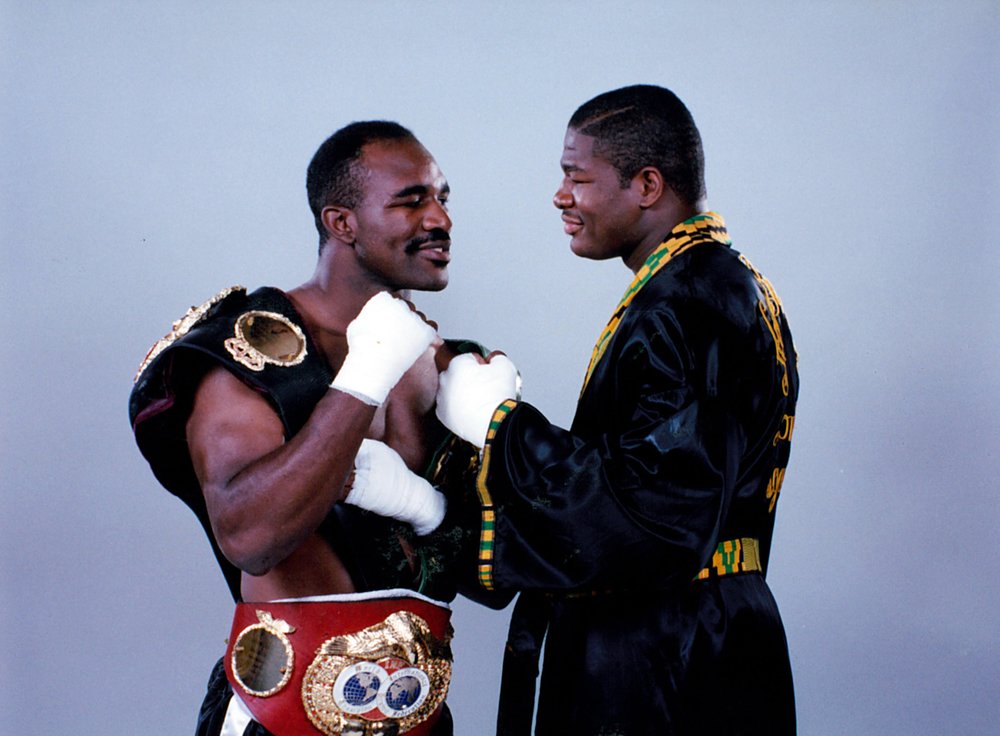 Holyfield (left) and Bowe. Photo from The Ring archive

November 6, 1993 – Evander Holyfield MD 12 Riddick Bowe: A year earlier Holyfield – a 7-5 favorite – lost his WBA, WBC and IBF titles to Bowe in a classic. During the interim, both men got hungry, Holyfield for revenge and Bowe for food. The rematch was competitive and warming up when, in the seventh stanza, a lunatic later nicknamed “Fan Man” crashed into the ring ropes on a paraglider. There was a 21-minute delay and Holyfield dealt with it better, edging the bout on points to regain two of his old titles.

November 17, 2001 – Lennox Lewis TKO 5 Hasim Rahman: In early 2001, Lewis, a 20-1 favorite, was preoccupied with being on the set of the movie Ocean’s Eleven and took his eye off the ball. He arrived in South Africa the week of the Rahman fight and was promptly knocked out by the hard-hitting American. A fully-focused Lewis showed up in Las Vegas for the rematch and exacted revenge via spectacular fourth-round knockout.

September 22, 1927 – Gene Tunney UD 10 Jack Dempsey: Tunney outboxed Dempsey to win the title a year earlier before a crowd of 120,557 people in Philadelphia. When they met a second time, Dempsey dropped his rival in the seventh round and Tunney became the beneficiary of the now infamous “long count” (Dempsey initially refused to move to a neutral corner as per the rules). The champion recovered and went on to retain his title in Chicago.

May 15, 1953 – Rocky Marciano KO 1 Jersey Joe Walcott: Walcott, who had won the heavyweight title at the fifth attempt from Ezzard Charles in 1951, dropped Marciano in the first round and was ahead on all three scorecards when the challenger landed a one-punch knockout blow in the 13th. Marciano – a 16-5 favorite in the return – repeated that result at 2:25 of Round 1 in New York.

May 25, 1965 – Muhammad Ali KO 1 Sonny Liston: Ali, then Cassius Clay, taunted Liston mercilessly in the build up to their first meeting and went on to beat the seemingly unbeatable champion, who retired at the end of Round 6. The bout was later named the Ring “Upset of the Year”. The rematch took place 15 months later in Maine, and this time Ali dropped Liston with a right hand that would become known as “The Phantom Punch”. The fight was shrouded in mystery with some believing that Liston took a dive on orders from the mob. 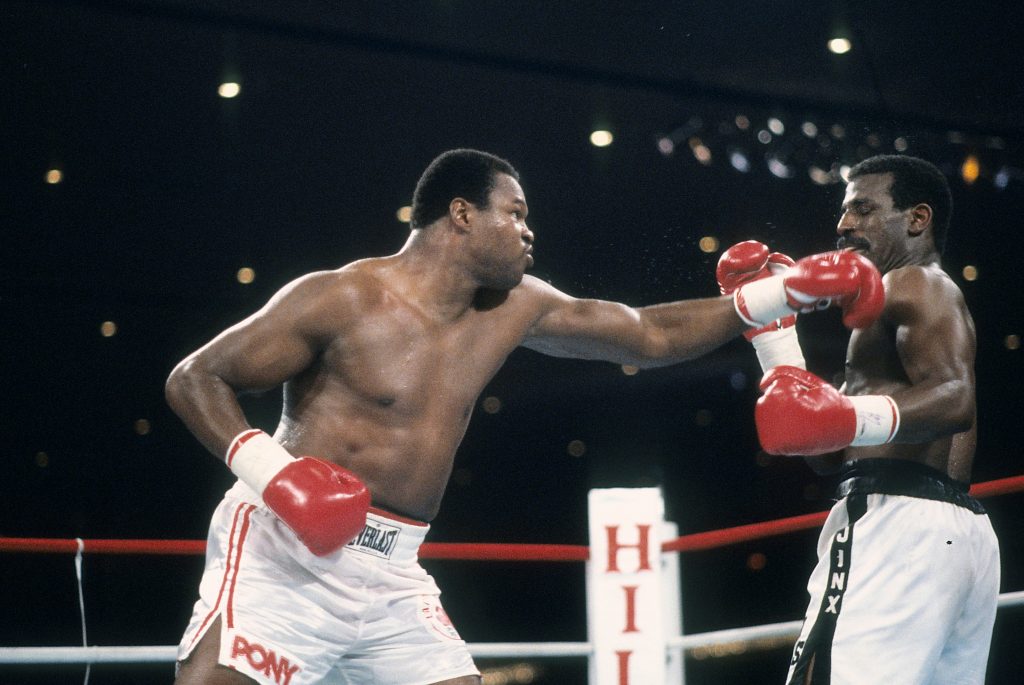 Holmes (left) attacks Michael Spinks in their rematch. Photo from The Ring archive

April 19, 1986 – Michael Spinks SD 15 Larry Holmes: Spinks had caused The Ring Magazine “Upset of the Year” in 1985 when he won a razor-thin unanimous decision over Holmes. The two met in Las Vegas the following spring for “Vindication in Vegas.” The former light heavyweight champion started cagily but grew into the fight and managed to repeat the victory, this time by controversial split decision.

June 27, 1997 – Evander Holyfield DQ 3 Mike Tyson: The first fight was five years in the making and by the time it took place, Holyfield was believed to be over-the-hill. However, in November 1996, as a 25-1 underdog, “The Real Deal” shocked the boxing world and Tyson by stopping him in 11 rounds. In the rematch, Holyfield began where he left off, bossing the action, but when Tyson sustained a cut from an accidental clash of heads, he responded by biting Holyfield on both ears. Tyson was disqualified, fined and banned for a year following the most infamous foul in heavyweight championship history.

Neither Ali-Frazier nor Ali-Norton were considered because the direct rematches were non-title bouts.