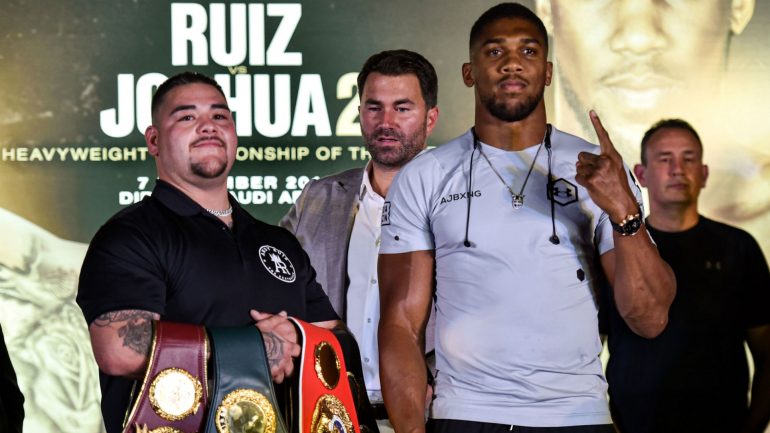 Promoter Bob Arum enjoys working off other personalities, seeing revivals as foils, as opportunities to solidify a compare-and-contrast assertion he makes.

Don King and he were Godzilla and King Kong going hammer and tong in the 70s and 80s, and of late, Arum and Brit deal-maker Eddie Hearn have traded barbed banter.

On the Everlast TALKBOX podcast Arum managed to pepper the Matchroom manager a few times.

I asked Arum if he’d be watching the Dec. 7 clash between champ Andy Ruiz and Anthony Joshua. His reply was multi faceted and poison tipped.

I took the opportunity to ask Arum about Ruiz. Top Rank and Ruiz parted ties, I wondered if maybe Bob doesn’t kick himself for that move…

“No, we didn’t cut him. He had visions of money that he wanted that we weren’t prepared to pay. And so we made that decision. Now he went with another promotion company, and it was like hitting the lottery, getting that fight because the fighter who had the fight tested dirty. And he got that fight. We always knew Andy was a very good fighter, but not on the elite level. I didn’t think elite, so God bless him. He did it. Yeah man, he bloody well did it.”

And he beat a fighter perceived as elite….

“Yeah well, Joshua. We were totally, totally misinformed about Joshua. Right? We were misinformed. Now maybe there’s something about fighting in the United States, with the testing and so forth that the commissions make you do, that didn’t agree with Joshua. And therefore it wasn’t Joshua that’s been fighting in the UK under really lax testing standards. And in Saudi Arabia where there are apparently none. So I think you’re going to see a different Joshua in this fight. I don’t want to accuse anybody of anything because what do I know? I don’t know anything about it. But I smelled something bad.”

NOTE: We are allowed to wonder, because, hello, this is the age we are in, we are all fooling ourselves if we don’t comprehend that a certain number of the best and brightest have managed to ascend to that level because of a hand up from banned chemicals which aid in strength and stamina and recovery. But no, we all have to trust the process, to a degree, and try to not indict, prosecute and sentence persons prematurely.

NOTE 2: I messaged Eddie Hearn, asking if he wanted to respond to Bob. I will insert his response if and when furnished.

NOTE 3: AJ passed VADA’s testing for the Ruiz fight, and both Ruiz and Joshua are enrolled for VADA screening for the Dec. 7 rematch. Heavyweight Dillian Whyte wasn’t shy, and publicly proclaimed that he thought stricter testing in America threw AJ off his game in the first Ruiz scrap. Whyte himself got ensnared in a PED positive quagmire in July. So, yeah, the subject is not an inconsequential subplot to ponder.

And along those lines, friend, what do you make of the slimmer, trimmer, pared down vessel that is Joshua. This indicates to me he seeks to be the more mobile boxer, stick and move, get in and get out against Ruiz Dec. 7. Is it not a risk to attempt this reformation now, after using one recipe to get to this point? Let us know, in comments section!