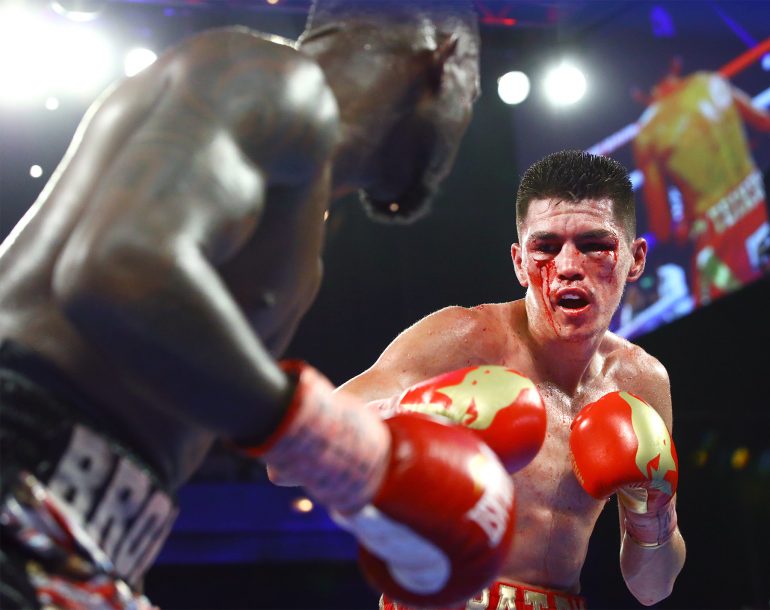 Junior middleweight fringe contender Patrick Teixeira pulled off an upset Saturday night, knocking down Carlos Adames en route to a hard-fought unanimous decision at the Chelsea Ballroom inside The Cosmopolitan in Las Vegas.

The WBO mandated the fight between Adames and Teixeira, ranked No. 1 and No. 2, respectively, by the sanctioning body. Jaime Munguia, who is facing Gary O’Sullivan in a middleweight bout on Jan. 11 in San Antonio, still holds the WBO junior middleweight title. Teixeira won the WBO’s interim belt by beating Adames.

Adames, who is trained by Robert Garcia, last fought on June 28, defeating the late Patrick Day by unanimous decision. Teixeira defeated Mario Lozano by majority decision on April 13 and has won his previous four bouts since suffering his only loss at the hands of Curtis Stevens in May of 2016.

The 25-year-old Adames was the aggressor from the opening bell, closing the distance between the two in the hopes of landing hooks and crosses to Teixeira’s head. The southpaw Teixeira attempted to box and counter Adames from the outside, but was sucked into having to exchange with the hard-hitting Dominican fighter.

By the sixth round, Teixeira’s face had bore the brunt of Adames’ punches. He was bruised around both eyes and had blood seeping down into his eyes from cuts along his left eye eyebrow and a cut on his right cheekbone. 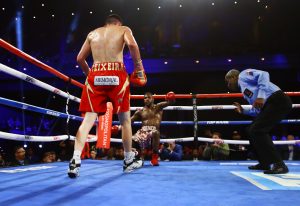 Teixeira sent Adames reeling into the ropes for a knockdown in Round 7. Photo by Mikey Williams / Top Rank

Sensing he was down in the fight, the 28-year-old Teixeira swung momentum his way towards the end of round seven, landing a series of combinations to the head that dropped Adames to the canvas against the ropes. Adames beat the count, but was lucky the bell sounded to end the round.

The pace of the fight slowed as both fighters were more deliberate with their attack, taking turns initiating exchanges where both connected on lead or counter hooks and crosses to the head.

Both fighters looked exhausted during the final round. Adames walked Teixeira down, landing thudding punches to the head, prompting Teixeira to shake his head as if to say the punches had no effect on him. Both fighters embraced after the final bell sounded.

Teixeira won the 12th round on two of the judges’ scorecards, edging the decision in his favor.

“I felt like I needed to win the last round,” said Teixeira, who is promoted by Golden Boy Promotions. “It was a close fight. Every point was crucial, and I won the final round to win the fight. It was tough with the cuts, but I was able to get through it because of my experience. It was a little harder, but my corner (including cutman Rudy Hernandez) did an excellent job on the cuts.”

Adames, who now resides in the Washington Heights section of New York City, drops to 18-1, 14 KOs.

Junior welterweight contender Arnold Barboza, Jr. remained unbeaten, knocking out Brazil’s William Silva at the end of the fifth round. 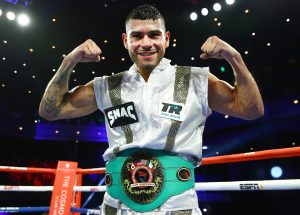 Barboza, who resides in the Los Angeles area, landed the more-telling punches throughout much of the fight. He dropped Silva with a right hand-left hook combination midway through the third round, but Silva was able to beat the count and momentarily stunned Barboza with a counter right to the head moments later.

Towards the end of the fifth round, Barboza landed a lead right hand to the body, dropping Silva flat onto his back. Silva laid on the canvas writhing in pain as referee Jay Nady counted Silva out at 2:59.

Silva, who is originally from Sao Paolo, Brazil and now resides in Plant City, Florida, drops to 27-3, 15 KOs.

Unheralded Larry Gomez of West Jordan, Utah scored an upset victory, defeating previously-unbeaten welterweight Brian Mendoza by split-decision. Mendoza (18-1, 13 KOs), who resides in Albuquerque, New Mexico, was the aggressor from the beginning of the fight, but his punch output dropped significantly during the second half of the fight. Gomez pressed the action during the final three rounds, which likely secured the win. One judge scored the bout 77-75 for Mendoza, while the other two judges scored the bout 77-75 for Gomez, who goes to 10-1, 8 KOs.

Welterweight Xander Zayas dropped Virgel Windfield (2-3-1, 2 KO) of North Carolina twice en route to a knockout victory in the opening round. Zayas (2-0, 2 KOs), a 17-year-old from Sunrise, Florida, dropped Windfield to one knee with an overhand right to the head, prompting referee Jay Nady to stop the fight at 1:48. Zayas made headlines earlier this year by becoming the youngest to sign a promotional deal with Top Rank at the age of 16.

Heavyweight Guido Vianello of Italy improved to 6-0, 6 KOs with a second round knockout victory over Colby Madison of Owings Mills, Maryland. A right cross though the guard landed on the head of Madison (8-2-2, 5 KOs), dropping him to the canvas. Referee Jay Nady counted Madison out at 44 seconds.

In the opening bout of the Top Rank card, junior welterweight prospect Andy Hiraoka stopped veteran Rogelio Cazarez in the second round. Hiraoka (15-0, 10 KOs), who was fighting for the first time outside Japan, battered Cazarez before the fight was stopped at 2:16 of the second round. Cazarez (13-9, 5 KOs), who resides in Batesville, Arkansas, has lost his last four bouts.