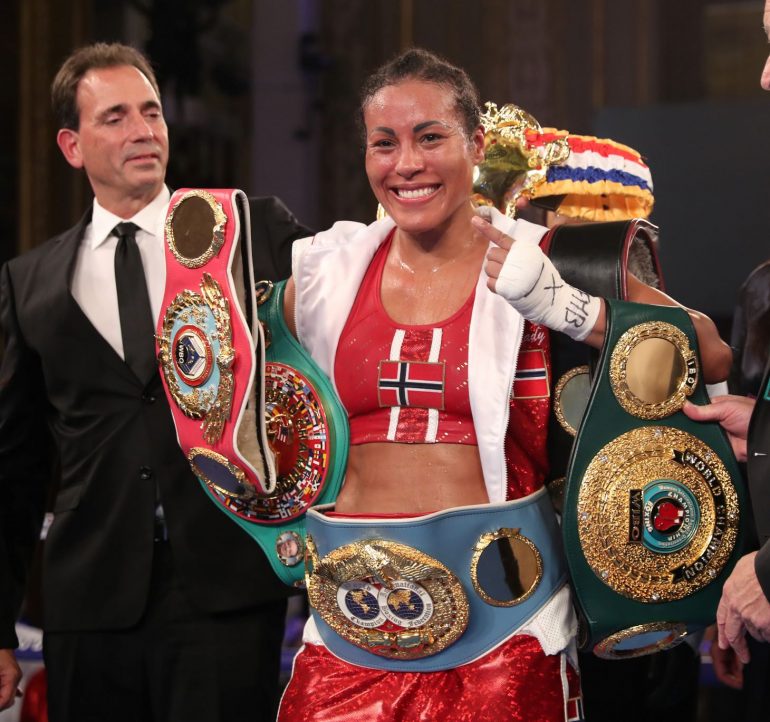 Cecilia Braekhus had more trouble putting on her six world title belts than she did defending them against Victoria Bustos on Saturday afternoon in the Casino de Monte Carlo Salle Medecin, in Monte Carlo, Monaco.

“I’m back in business,” Braekhus said. “The first and second rounds, I was a little bit rusty. I think it was the third round that I started to get my groove back. The last rounds I was trying to have fun and try some stuff I tried in the gym. I feel great and now I’m back.”

Eddie Hearn stepped in and outlined Braekhus’ ultimate goal of a 2020 showdown with Katie Taylor.

“Of course, the future is Katie Taylor,” Hearn said. “They’re undisputed world champions. I think another fight for both in the spring and then a summer fight. It’s the biggest fight in boxing. I think we need to make that fight.

“Cecilia has broken down the doors in professional boxing. She wants to make sure we can get the biggest fights. Those two are certainly on a collision course. I think in 2020, you’ll definitely see that fight.”

Braekhus chimed in, “That sounds good to me.”

Moments before, Braekhus made easy work of Bustos.

In the first round, Braekhus immediately established her comfort distance. It was quickly evident that Bustos was out of her league. Braekhus, working with trainer Abel Sanchez, connected with a good right over a lazy Bustos jab.

Braekhus started the second as she did the first, establishing distance and then attacking. Bustos (19-6) appeared to let her hands go, though each time she did, she was greeted by a Braekhus counter.

Bustos tried. She took a lot of shots, and she tried answering back. She just didn’t possess the skill set to be effective.

When Bustos was aggressive, she often tried to swarm her way forward with her head down and whale away, not seeing where she was punching. 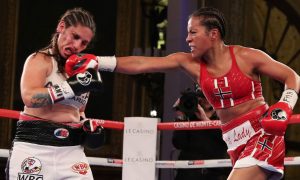 Braekhus nailed Bustos with a straight right in the second

Meanwhile, Braekhus was in the pocket, very confident and that came through with a straight right that hit Bustos in the chin during the second.

By the third, Bustos’ face began to grow red from Braekhus’ long rights. With :25 left in the third, Braekhus almost caught Bustos with a downward right, missing by inches. Through three, Braekhus was doing exactly what Sanchez wanted her to do.

At the outset of the fourth, Bustos did nail Braekhus with a straight left to the face. Braekhus shrugged it off and began maneuvering her way into her punching zone again. Braekhus closed the fourth with a solid right to Bustos’ face.

Bustos won on the toughness scale.

Though after four, it was apparent Braekhus was well ahead, easily winning all four.

In the fifth, Bustos began showing some fatigue. She tried reaching with Hail Mary shots that more often hit air than hit Braekhus. Bustos did land a left hook in the fifth, but it wasn’t anything substantial enough to sway the round in her favor.

Braekhus started going to the body more in the sixth. Braekhus hit Bustos with a left that sent Bustos to the floor, however, the referee said it was a slip, even though Braekhus appeared to send her down with a punch.

A replay showed Braekhus landing a left hook, which caught Bustos off balance. It was a legitimate shot and a legitimate knockdown.

But it didn’t matter.

Sanchez gave orders to Braekhus to keep on applying the pressure, so it would force a stoppage.

Braekhus went back to work in the seventh, slamming Bustos with straight rights to the face, mixed in with uppercuts.

Braekhus tried working the body in the eighth, though Bustos got in a sneaky left to the face. By then, Braekhus was settled and in a zone. She had no real concerns about Bustos, other than getting caught by something foolish.

Braekhus started the ninth very active, flicking the jab, then dropped a few body shots. Throughout, Bustos deserved credit for continuing to come forward. She failed to throw anything in combination.

By the final round, and with the fight firmly in hand, Braekhus still went after Bustos. Braekhus used her jab well, though couldn’t exactly get what she wanted—a stoppage victory for the first time since she stopped Mikaela Lauren in six in October 2017.