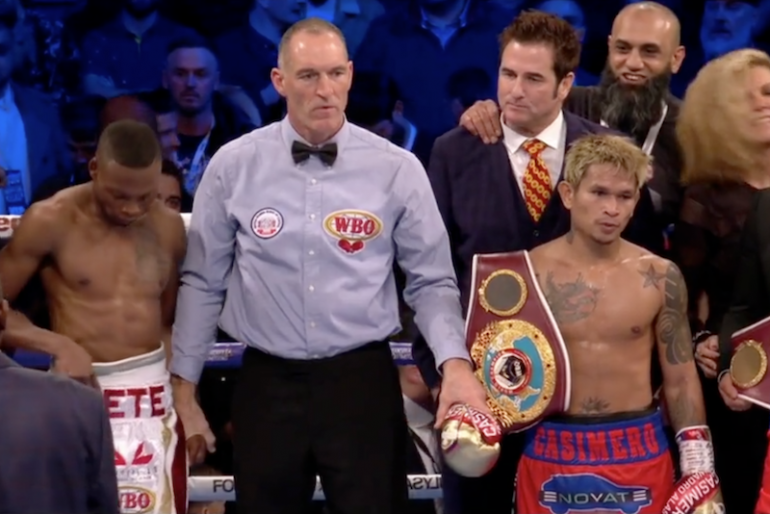 The 30-year-old from Ormoc City in Leyte province becomes the fourth Filipino fighter to win world titles in at least three weight classes after knocking out Zolani Tete in the third round on Saturday in Birmingham, England to lift the WBO bantamweight title.

Casimero, who previously held the IBF junior flyweight and flyweight titles, sent the South African crashing to the canvas for the first time with a right hook that caught the rangy southpaw by surprise. Tete rose up but his legs were unsteady, and he never fully recovered.

The second knockdown came a few moments later as Casimero went for the finish, landing a left hook high on the head that sent Tete face first into the ropes. Referee Steve Gray waved the fight off as Tete took two more punches along the ropes.

The victory is just the latest in a long line of big victories on the road for Casimero (29-4, 20 knockouts), who has earned his reputation as a fierce road warrior who is not afraid to go to his opponents’ backyards to fight. The fight was his thirteenth outside of his home country, and his second in the United Kingdom, following his tenth round demolition of Charlie Edwards in 2016.

Casimero won his first title at 108 pounds in 2012, when he traveled to Argentina to knock out Luis Alberto Lazarte in a fight best known for its post-fight riot. Then, after moving up to 112 pounds, Casimero got his revenge against Amnat Ruenroeng, knocking out the previously unbeaten Thai in four rounds in China.

He earned this mandatory shot by knocking out Ricardo Espinoza Franco in twelve rounds to win the interim title.

Tete (28-4, 21 knockouts), who entered the fight rated the no. 1 contender at 118 pounds by THE RING, had not fought since October of 2018, and had withdrawn from the World Boxing Super Series with a right shoulder injury just days before a scheduled unification bout with Donaire.

Though the fight was not aired live in Casimero’s native Philippines, the win should boost his reputation as one of his country’s best fighters of this era.