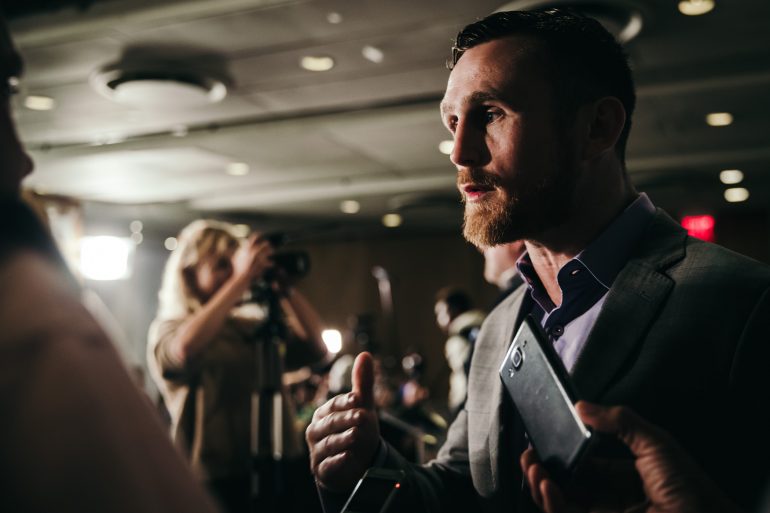 He is the best known Irish-Aussie in the arena, and is probably best known for taking an L in his signature scrap.

Dennis Hogan’s identity to this point hasn’t centered around a career defining win, but he sounded confident when he talked about his Dec. 7 fight against Jermall Charlo.

Hogan, age 34, has shrugged off, he said, his majority decision loss to Jaime Munguia in April. “My goals never changed, and I know I was still on track to be world champion,” he said. Yes, he said he decided to not stew on the loss against Munguia, who had the WBO 154 pound crown.

The next fight will unfold in Brooklyn, and the weight class is one tick north. At middleweight, Hogan said that he will be sharp and not to be underestimated. Til now, Charlo has said that he wants to fight the top dogs, the GGGs and Canelos…well, he knows he isn’t on that plane, but Hogan said he is not to be dismissed. “Ring craft is one of my biggest crafts, and distance,” he said. Solid is the best way to describe him, and he said he gets stronger as the rounds progressed, he tells us. Hogan is light on his feet, does indeed have a roomy gas tank, will show lateral movement, vary his footwork, clang you with counters, and also take offensive runs at an opponent. He gave no quarter against jumbo 154-pounder Munguia, so one might think he’d not be cowed by Charlo’s physique and caliber of launches.

What does Hogan think of the Texas twin? Charlo has solid fundamentals and he gives him credit for getting to where he is. But…”I’m winning it well,” he said, and answered that he is “one hundred percent” sure he will take Charlo’s crown.

He noted he was 14 to 1 underdog versus Munguia and a maybe 5 to 1 dog here. “They made a big mistake there and I think they’re making a mistake here as well,” said the 28-2-1 (7 knockouts) battler.

Manager Peter Kahn weighed in, talking about that trying time, the April shower of disappointment. “Hogan should the WBO junior middleweight champion right now, he won that fight against Munguia,” Kahn said. “That was taken from him, and when something is taken from you it changes the trajectory of your life. He goes from a potential million dollar defense to not…, and, it doesn’t matter if people, if media say you won. As far as protesting the WBO, the purpose was to get rematch,” he said, admitting he thought he’d not likely be able to overturn the decision. “But Munguia wanted no part of it.  Golden Boy, I think Eric Gomez was sincere in his efforts to get a rematch to happen. That would have been far more more compelling than (Patrick) Allotey. DAZN could have used  it. But Munguia, it was someone he knew beat him, he didn’t want to revisit that, he knew he couldnt hurt Dennis, he knew another twelve round battle was coming, he wasn’t confident.”

Hogan does come off as confident; we talked about advantages…does the fighter, training in Florida, where Kahn resides, think he needs a KO to get the nod, being that Charlo is the more established presence?  He isn’t thinking that way, and “all I need is a fair chance,” he said, and he will take it from there.

Kahn said that after the Munguia deal, they were free to look around, Golden Boy didn’t have promotional options. An Erickson Lubin fight was in the works, and Hogan was game for it. But then came the call for a Charlo bout. “This is called prize fighting,” Kahn said. The purse will be considerable, and, he said, Dennis has tangoed with higher weight fighters before. “This is what it’s about,” the manager stated.

Hogan has had an eight year plan; win a crown and defend the strap in Ireland. Dublin, specifically, he said.

Kahn is eyes wide open, with understandable bias that he likes the chances for his kid. “Charlo is the bigger, stronger middleweight, and I’m not saying Dennis is Pacquiao, but Manny is beating longer, taller opponents, guys ten years younger than him. He has the right outlook, and game plan, and he’s prepping to use every inch of that ring to outbox Charlo.

No, Kahn isn’t telling Dennis that he’s coming to NY and to Barclays two points down, because Charlo has the better connections. “My stance is to have trust in the WBC and the NY commission and in PBC,” he told me. “I really believe in having faith the right thing is gonna take place. You can’t go in with a defeated mindset.” Also, win or lose, Hogan is contracted beyond PBC for this fight, so there is a feeling of comfort from that arrangement.

You can see how it plays out Dec. 7, when the 29-0 (21 KOs) twin makes his second defense, after downing Brandon Adams. Hogan will have to be heroic, tap into that underdog magical mindset to get the W, but stranger things have happened. In boxing, stranger things would happen within a week of Hogan winning the WBC middleweight strap.