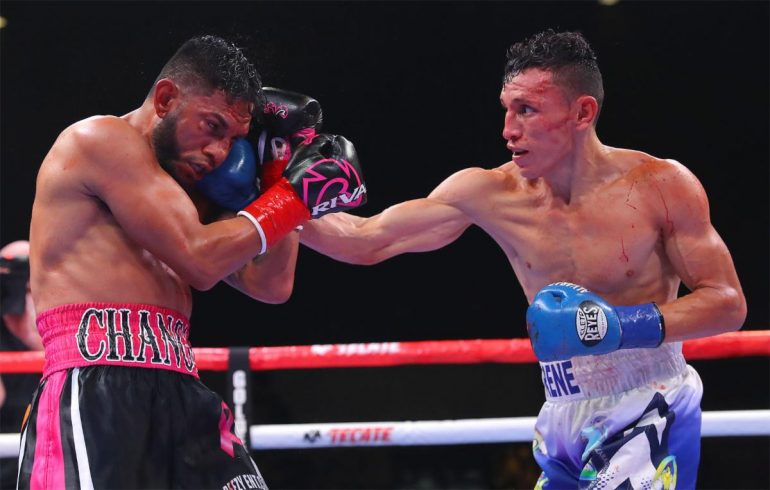 Alvarado’s long journey from gatekeeper to contender in recent years climaxed with his stopping Andrew Cancio after the seventh round of their DAZN-streamed rematch.

With the victory, Alvarado improves to 32-8, 21 knockouts, and earns the WBA’s secondary 130-pound world title (which Ring Magazine does not recognize).

The fight between Cancio and Alvarado was a return bout of their featherweight clash in December 2015, which also took place at the Fantasy Springs Resort and Casino, the venue for Saturday’s card. After a slow start to their first meeting, Cancio was able to break down Alvarado before stopping him in round eight.

Cancio, who resides in nearby Blythe, overcame a knockdown at the hands of Alberto Machado in February before stopping him in Round 4. The 31-year-old Cancio stopped Machado in less than three rounds in their anticipated June rematch.

Cancio stated in an interview with The Ring before the fight that he was going to box Alvarado before breaking him down. That plan went array from the opening bell as Alvarado forced Cancio to stand and trade with him in the center of the ring. Rather than box from the outside, Cancio was forced to fight off his back leg as Alvarado walked him down.

A cut over his left eye in Round 3 forced Cancio to fight with blood seeping into his eyes. He began to take the initiative, but Alvarado continued to land several lead and counter right hands to the head of Cancio, further closing his left eye.

As much as Cancio attempted to box or work from the outside, Alvarado had an answer, especially during the seventh round, where he landed more thudding right hands to the head. After the round ended, referee Raul Caiz Sr. decided to wave the fight off. Alvarado, who was still sitting on his stool, wept openly after realizing the fight was stopped.

“I’m just overwhelmed,” said Alvarado after the fight. “I’m now a world champion like my brother.”

The victory over Cancio took place on the same date as Arguello’s 13th-round knockout victory over Ruben Olivares at The Forum in Inglewood, California. With the victory, Arguello won the WBA featherweight title.