Deontay Wilder explodes on Luis Ortiz with a seventh-round KO 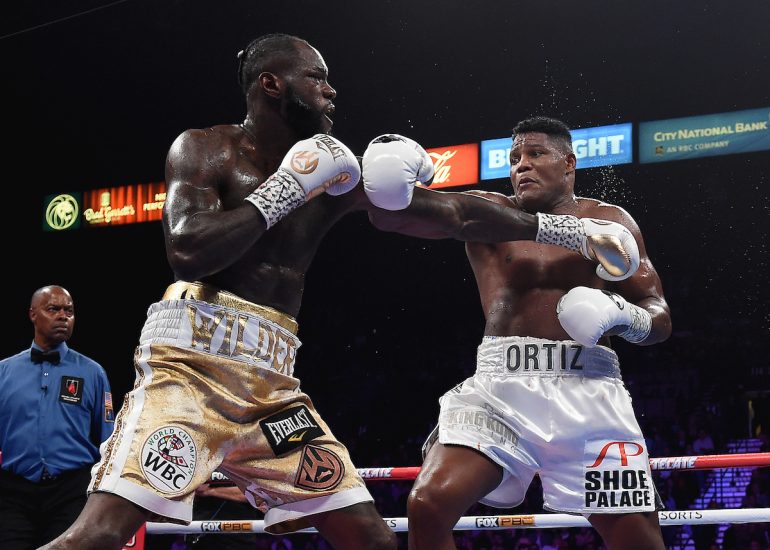 LAS VEGAS—What was he waiting for? What was he doing? And so, it went round after round for Deontay Wilder.

He would back up. He wasn’t even hesitant. He simply didn’t throw any punches.

But Wilder warns anyone willing to listen not to blink when he fights.

We had to wait for the seventh round to finally see the grand plan explode—and erupt it did, right on Luis Ortiz’s face.

“The Bronze Bomber” scored a highlight-reel knockout at 2:51 of the seventh round to earn his 10th-straight successful WBC heavyweight title defense, which ties Muhammad Ali, Saturday night from the MGM Grand Arena in Las Vegas on the FOX Sports PBC Pay-Per-View Fight Night.

“With Ortiz, you can see why no other heavyweight wants to fight him,” Wilder said. “He’s very crafty, he moves strategically and his intellect is very high. I had to measure him in certain places.

“I had to go in and out and finally I found my measurement. I saw the shot and I took it. My intellect is very high in the ring and no one gives me credit for me. I think I buzzed him with a left hook earlier in the round and I took it from there.

“Ortiz is one of the best in the world. You have to give him that. I want to thank his family for allowing Ortiz to come into the ring and share his energy with me. I hope one of the other top heavyweights gives this man another opportunity.”

Wilder (42-0-1, 41 knockouts) had not done much of anything until he landed the huge right.

That, however, was by design.

Jay Deas, who trains Wilder with Mark Breland, created a plan where Wilder would drag Ortiz into the later rounds, because they felt, regardless of “King Kong’s” new svelte shape, he would tire and get sloppy in the later rounds.

“The things is, Ortiz is very, very good and if you put Ortiz on a chart, what we knew was he gets weaker as the fight goes, he loses his strength through the rounds, whereas, Deontay gets stronger,” Deas said. “Remember the first fight, people were booing the first three rounds.

“The biggest disadvantage that we felt would be in was trade big shots early with somebody while they’re at full strength. The idea was to let Ortiz lose some steam, and then trade our right for his left. Because Ortiz is always going to counter you right with his left. We wanted to make that trade.

“Trading against Ortiz early was a dumb idea. I didn’t care whether people were booing or not.”

After six, Ortiz (31-2, 26 KOs) was up on all three scorecards (Eric Cheek 58-56, Dave Moretti 59-55 and Steve Weisfeld 59-55). Combined, the three judges gave Wilder four rounds, Cheek gave Wilder the first and the sixth, and Moretti and Weisfeld each also gave Wilder the sixth.

“This is boxing,” said Ortiz, who slammed his glove against the top rope after the fight in frustration. “I said that one of us was going to get knocked out and it wasn’t going to go 12 rounds. I was clear headed when I hit the canvas. When I heard the referee say seven, I was trying to get up, but I guess the count went a little quicker than I thought.

“I’m ready for any battle. I want to thank my team and everybody that came to see this fight today.”

The pressing question was: What was Wilder waiting for? 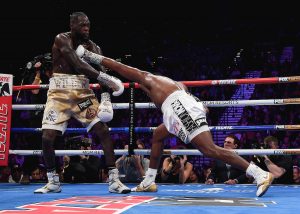 Through three rounds, he had not committed to anything.

In the sixth, his best, until the seventh, he showed a little more activity.

Wilder, being patient, taking his time, plowed a straight right into Ortiz’s nose, and down went Ortiz on his back.

Referee Kenny Bayless looked in closely as Ortiz tried getting to his feet. But by then, it was over.

Wilder set it up wonderfully, poking at Ortiz with lazy left jab, then unfurled the cannon.

“I’m here and I’m not going nowhere,” Wilder said. “At this point in time, I deserve my due respect.”