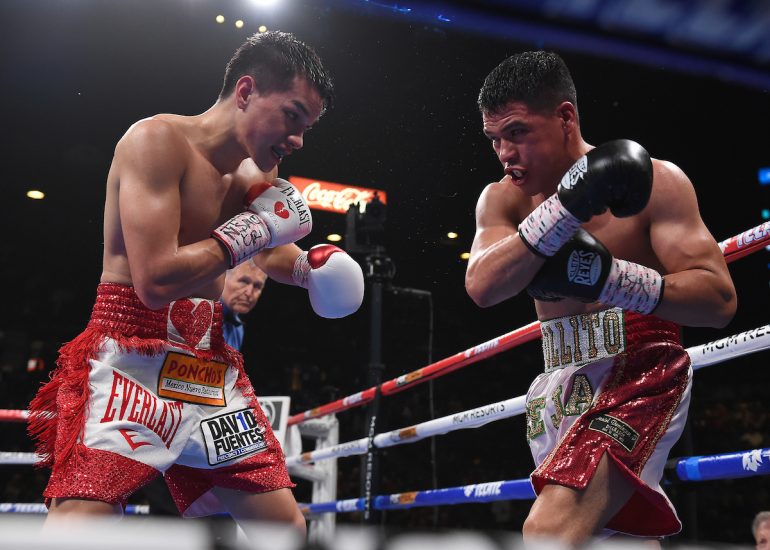 LAS VEGAS — It’s part confusing, part entertaining, and for anyone in Brandon Figueroa’s corner, it had to be absolutely maddening. “The Heartbreaker” is a 5-foot-9 super bantamweight who fights like he’s 5-2.

Still, Figueroa (20-0-1, 15 knockouts) fought small and took a pounding, though he managed to do enough to walk away with his record unblemished with a split-decision draw on the Deontay Wilder-Luis Ortiz II undercard on Fox pay-per-view Saturday night from the MGM Grand Garden Arena, in Las Vegas.

“I think I did win the fight,” Figueroa said. “He put on a lot of pressure, but I fought better in the early rounds and I finished strong. I feel like he won maybe four rounds out of the whole fight. I thought I won the first four and closed out the last few rounds of the fight strong.

“His body weight was a factor. I couldn’t really move him when I hit him. He didn’t have to drain himself, but we took the fight and we won’t make excuses.

“I basically fought a person in a weight class above mine tonight. I’m pretty sure if he weighed 122, it wouldn’t even be a close fight. We have to run the rematch back but he better makes the weight.”

The 373 punches landed are the most Figueroa has endured in his young career.

“This fight is for all of you fans who came here to see me,” Ceja said. “He was a man about it and he gave me the fight. I think I won, but I respect the judges’ decision. I’ll definitely run it back in a rematch.”

After a slow first round, where Ceja managed to get inside of the taller Figueroa, the two went to fighting in a phone booth. Pinned against the ropes in the second, Ceja attacked the body, while Figueroa worked up and down.

By the middle of the second, Figueroa may have heard some wise advice and backed away, using his height. But it wasn’t long before Ceja closed the distance and the two were once again inches from each other, hitting one another with almost every shot.

Both fighters exchanged heavy shots to start the fifth. Ceja went back to pounding the body, and Figueroa, in tight and unable to fully extend his arms did not appear to get as much power on his punches as he could have.

Figueroa did establish distance momentarily, but couldn’t get away from Ceja’s left hook and right uppercut.

In the sixth, Figueroa took a couple of brutal left hooks. Switching from southpaw to conventional, and back, it didn’t seem to confuse Ceja. He appeared to be the heavier-handed puncher. He outworked Figueroa, for the most part, in the round.

Figueroa tried to use distance in the ninth. But Ceja, still with some steam left to bob his head and duck under Figueroa’s jab, got back inside to do more work.

Even though there was no blatant cut, Ceja’s trunks were a pinkish hue.

Ceja punctuated the 10th with another blunt left hook that zig-zagged Figueroa’s face.

In the 12th round, seemingly behind, Figueroa did little to change the tactics that had led to his body and face getting worked over. Figueroa did press the action, sensing he could be in some trouble.

The Heartbreaker used a left uppercut to nail Ceja in the chest. But he couldn’t avert Ceja’s looping left hook. It was as if Figueroa didn’t see it coming, or didn’t care. One thing was certain, Figueroa did enough to win the last round.

When the scores were read, it caused a stir among the crowd, who believed Ceja did enough to win.