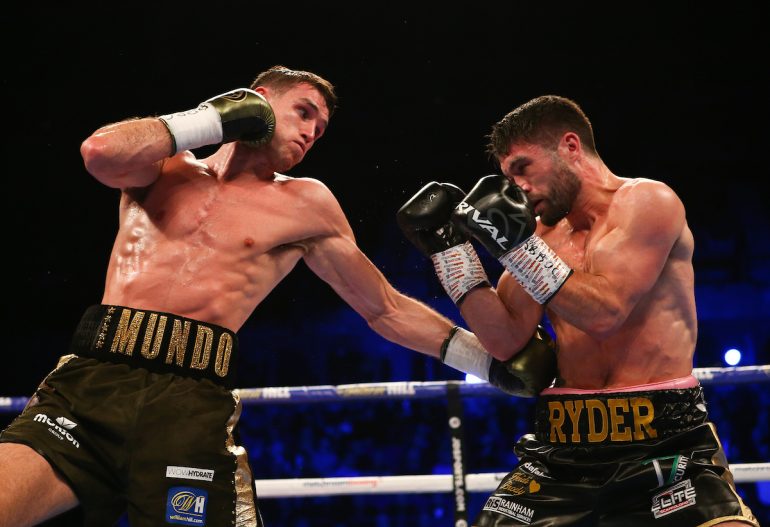 LIVERPOOL, England – It was close. It was very, very close.

British star Callum Smith retained his Ring Magazine and WBA super middleweight titles by posting a 12-round unanimous decision over countryman John Ryder at the M&S Bank Arena on Saturday. The official scores were 117-111, 116-112 and 116-112, tallies which – for most at ringside – were uncomfortably wide.

Smith, who was appearing in his home city for the first time in over two years, overcame a brilliant challenge from Ryder, and it was a close battle from start to finish. There were no knockdowns, but Smith sustained a nasty wound to his right eye early and it got worse as the bout progressed.

“I always felt ahead,” said Smith (27-0, 19 knockouts) at the post-fight press conference. “I think I won most of the early rounds. I never once thought I was behind, but John put up a good performance. I can’t be at the races in each and every fight. Get me one of the big fights and you’ll see the best of me. I’ve always said that I need the fear factor.”

There was nothing in the opening round. Smith took center ring and fenced behind a stiff jab and Ryder was careful to avoid early mistakes. However, the challenger did release a brace of nice body shots and a sharp left hand to the head, precursors of what was to come.

Smith began to put serious spite into his own shots in the third and also displayed some nice variety. A sharp left uppercut-straight right combination sent Ryder back on his heels, but the Londoner continued to box well and the home crowd was becoming a touch uneasy. The challenger enjoyed a strong fourth and made a constant target of the mid-section.

The fifth was the best round of the fight to that point. Smith, an excellent inside fighter for a man of his size, accepted Ryder’s challenge up-close, but even though he landed the best punch of the round – a counter left hook – the champion was generally outworked for most of the session. When the bell rang to end that round, blood flowed freely from a wound lateral to his right eye.

Smith boxed far better in Round 6 and Ryder appeared discouraged by the power for the first time. Thumping shots landed from the outside and Ryder struggled to thread home worthwhile counters. The change was temporary, however, and the challenger came blazing back in the seventh and appeared to stun Smith against the ropes. 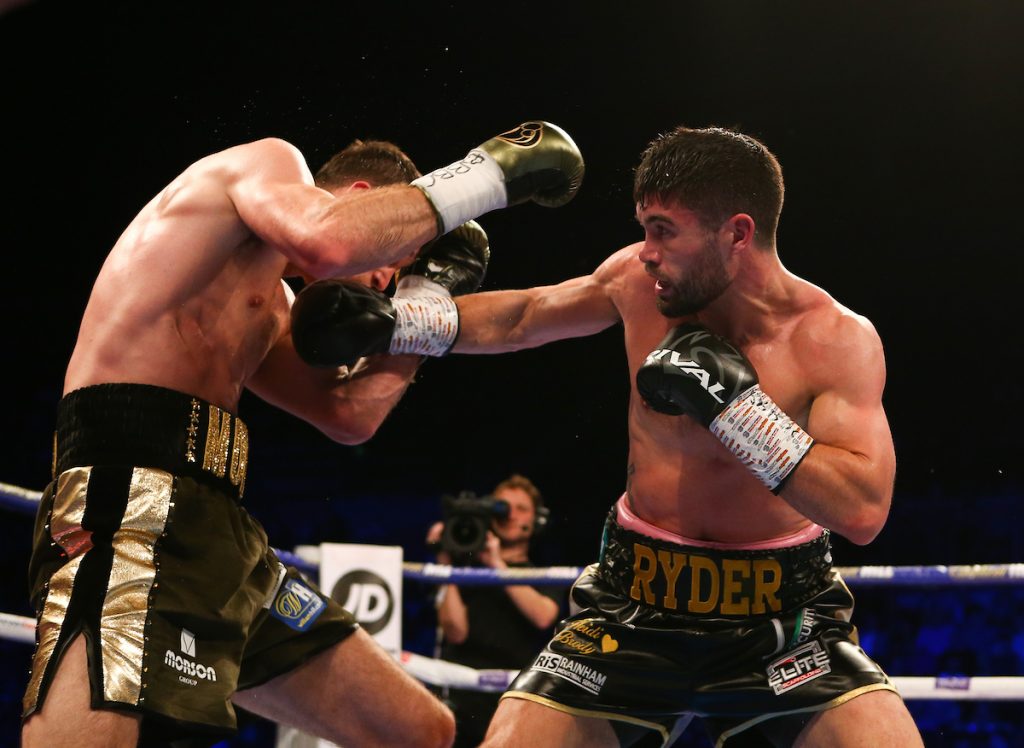 Convinced that he wasn’t making enough of an impression on the inside, Smith created distance in the eighth and, for the most part, the strategy worked. He was still pushed back by Ryder, but his scoring was more consistent, and Ryder couldn’t find the range. Being a southpaw-orthodox battle, the heads were also clashing frequently, and the home fighter was definitely getting the worst of it.

The champion couldn’t win impressively, so he had to settle for what he could get. In Round 8, Smith began to focus on his outside game and made a point of avoiding prolonged exchanges. If Ryder couldn’t score, he couldn’t win rounds and that was the smart move.

The 11th was big for Ryder. The London man got the better of a torrid inside battle, smashing the champion’s head back on several occasions. Smith was forced back into a war and the pair traded some vicious blows down the stretch. It was not the performance that Smith would have wanted, far from it, although an off-par showing could lead to the big fights that have previously eluded him.

Despite losing tonight, Ryder (28-5, 16 KOs) has proven himself to be a very competent operator. There was a huge size differential, but the challenger handled himself brilliantly and landed plenty of leather throughout. With Smith seeking superfights, a rematch will fall on deaf ears for the time being, but Ryder certainly deserves a big fight in 2020.

“I feel that I won, and I feel that I was hard done by,” Ryder said afterwards. “I got in close and got to work earlier than I thought I would. I showed my worth and I should be champ.”

Both fighters weighed in at 167.7 pounds.

Cruiserweight Chris Billam-Smith won the vacant Commonwealth title with an impressive fifth-round stoppage over Craig Glover. The official time was 1:45. Billam-Smith (10-1, 9 KOs) was in command from the opening bell and his punches bloodied Glover’s face almost immediately. A well-placed left hook produced a knockdown in the fourth and the same punch was responsible for two more knockdowns in the fifth before the fight was stopped. Glover falls to 10-3 (8 KOs).

Junior middleweight Anthony Fowler scored a 10-round unanimous decision over Harry Scarff. All three judges scored the bout 98-91. Fowler, who also hails from Liverpool, had things largely his own way and decked Scarff with a compact and powerful left hook in the ninth. The former amateur standout couldn’t finish the job, but he was a runaway winner. The 28-year-old Fowler improves to 11-1 (8 KOs) and Scarff drops to 8-1 (1 KO).