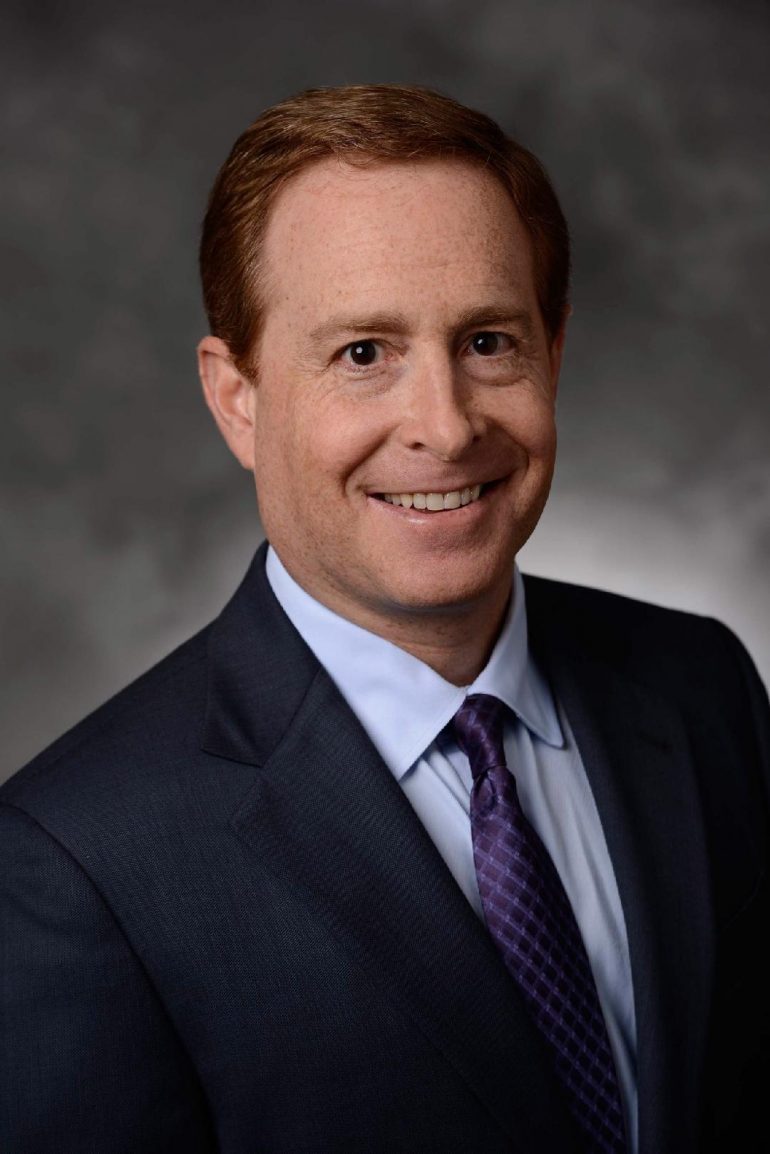 LAS VEGAS–On the eve of Deontay Wilder’s 10th title defense, a rematch against Luis Ortiz on FOX PPV (9PM ET/6PM PT) from the MGM Grand Garden Arena, in Las Vegas, Bill Wanger, Fox’s executive vice president, and head of programming and scheduling for the last seven years, sat down with RingTV.com to discuss the network’s increased role with boxing and the new heights it would like to achieve.

Wanger assumed the role of FOX Sports Executive Vice President of Programming in December 2013, following the successful launch of FS1 and FS2.

Wanger oversees programming and research for all FOX Sports linear channels as well as content strategy for all FOX Sports outlets and assessment of long-term rights acquisition opportunities and value. He plays a vital role in programming, scheduling, strategic planning, research and advertising sales support. His responsibilities also include content strategy, adding his voice to the business affairs team and assessing long-term rights acquisition opportunities and value.

Wanger joined FOX Broadcasting Company in 1989 as an analyst in the Research & Marketing Department. In 1993, he was promoted to Director of Research & Marketing where he was directly involved in creating the presentation to NFL owners that helped secure FOX’s historic first television rights deal in December 1993. Subsequently, he played a vital role in helping secure new affiliates and worked directly with former New World CBS stations as they transitioned to FOX in early 1994.

In addition to the NFL, Wanger has been an integral part of every rights deal ever negotiated by FOX Sports, including NHL, MLB, NASCAR, UFC, MLS, USGA, the BCS, Pac-12 Championship Game and regular season, Big Ten Championship Game, Bundesliga soccer and the FIFA World Cup and Women’s World Cup. He also was instrumental in planning the launch of FS1, establishing and developing the network’s programming strategy and infrastructure. Recognized for his influence in the sports media industry, Wanger is a member of Sports Business Journal’s prestigious “40 Under 40” Class of 2007.

RingTV: Why boxing on Fox?

Bill Wanger: Actually, Fox has been in the boxing business, on-and-off, really since the 1990s. We aired a couple of Mike Tyson fights, then we had a gap. We did a deal with Golden Boy a few years back, when FS1 launched, and then when Al Haymon formed PBC, he came to us and wanted to put on fights, that was our first introduction to Al and Premier Boxing in 2015.

It was a different type of relationship and a different type of model. In 2018, towards the end of the year, we did a new deal with PBC where we would produce the fights and it’s just a more robust package with top fights. We got into it, because we felt that a lot of these great boxers were really under exposed and we felt that we expose them to a broader audience and putting them in Fox Sports and Fox Sports 1 (FS1). We got primetime Saturday nights.

Our first fight was last December, with the Charlo twins fighting on the same card. This coming December, we have that rematch between Jermell Charlo and Tony Harrison.

RTV: Fox also did Julian Williams and Jarrett Hurd, too.

BW: We did in May, and that was a really surprising outcome and a great fight. That was a battle.

RTV: Boxing on TV right now is robust as it’s ever been. What attracted Fox to boxing?

BW: We took a look at the boxing landscape and I think it started with Al Haymon and PBC bringing together some of the greatest boxers in the world. We also felt that the key glamour weight divisions, heavyweight, welterweight, were really stocked well. We felt we could grow it.

We’re in this to grow boxing and grow the sport.

RTV: Let’s about the Fox history with pay-per-view.

We’ll do about four or five pay-per-views a year, and they’re spaced out strategically, based on our schedule, where the fighters are in their rotation. We definitely like to have some in the fall, because we get to promote those fights inside of really highly rated programming like the NFL and Major League Baseball and college football.

We’re trying to get the median and the casual fans into our tent.

RTV: What’s the target demographic that you would like to hit, or does it really matter?

BW: Obviously the core boxing fans, but we’re really trying to grow beyond that. I mean the core boxing fan is in the Midwest, the Rust Belt area, the heartland, and we’re definitely trying to broaden that out. New York obviously has a great boxing history, and has been a great market for us. New Orleans is a terrific boxing market. Philadelphia, too, obviously.

We’re trying to get the median and the casual fans into our tent.

RTV: Let’s talk about Wilder-Ortiz II and this event.

BW: Pay-per-view boxing, all of our big events have different feels. The Super Bowl, World Series, pay-per-view boxing. But this has a special feeling and dynamic, and there’s nothing better when the main event and pay-per-view walks at 11:15 Eastern. It’s pretty exciting.

RTV: Where do you think boxing is today?

BW: I think the sport is really healthy. You’ve seen it go from in the 1970s and 1980s really on broadcast TV, because that was the only thing around. Then, it moved to cable, and obviously pay-per-view. And then in the 1990s and early-2000s, it was on more premium cable, HBO, Showtime and some pay-per-view.

I think some of the audience started to shrink a little bit. Again, we saw it as an opportunity to bring boxing back to the mainstream.

RTV: What’s your history with the sport?

BW: I didn’t grow up an uber boxing fan, but I grew up watching Sugar Ray Leonard, Muhammad Ali at the tail end, Floyd Mayweather, Mike Tyson. I’ve always enjoyed boxing, and got into more through the PBC and our relationship with Al Haymon. I’ve really grown to like it.

Anytime you have two major media companies in Fox and ESPN, and some others, that are airing promos and great boxing matches, and we’re doing it in our top-rated events, that shows the world that we’re in this for the long term.

RTV: What I sense here is that boxing has far more fans than the mainstream sports media gives it credit for. Would that be accurate?

BW: We recognize the boxing fan, and that’s reason why we’re putting these fights on Fox and FS1. There is a great boxing fancore out there. There are uber, loyal fans who love the sport. The sport has had its up-and-downs, but I think this is one of its great up periods. Anytime you have two major media companies in Fox and ESPN, and some others, that are airing promos and great boxing matches, and we’re doing it in our top-rated events, that shows the world that we’re in this for the long term. We’re in this for growth and we’re trying to make these guys stars.

RTV: Are there any fighters that you feel can grow the sport to the mainstream?

BW: I obviously feel that Deontay is one of them, Errol Spence is one, Manny Pacquiao is a legend, even if he’s let’s say he’s in the twilight of his career. Caleb Plant has a great future. We’ll have him on the 2020 calendar for sure. We’ve had him on a few times already. There’s a whole, young crop of fighters that the PBC has signed. There’s Joey Spencer, Brandon Figueroa, and Vito Miernicki, who’s going to be on the Wilder-Ortiz II undercard.

RTV: The numbers leading into Wilder-Ortiz II have been pretty good with your shoulder programming.

BW: We’ve produced over 10 hours of shoulder programming in previewing Wilder-Ortiz II, and just delivered some phenomenal ratings with that. The “Fight Camp” episodes that have aired on Fox, which actually put on after an NFL single header reached 2.3-million viewers. It’s another way that we’re exposing their fighters, their personal stories and how they train. We’re putting that in front of a mass audience. That’s something we’re proud of and will continue to do.

BW: We want to see some fireworks, and electric crowd and people talking about it the next day. I talk with AL Haymon about putting on a great show and doing another one. We want to show people this is a great sport with great boxers out there, and we want to showcase them.

RTV: Do you have an idea of what next year will look like?

BW: We’re working on a great schedule, but we can’t reveal anything right now. We could be Philadelphia in January, nothing official. But I think 2020 will be a great year in boxing, with a slate the fans will be real exciting about.

BW: The date has been set. There is an agreement in place with the fighters. But a lot will depend on what happens Saturday night.

RTV: Finally, what’s your biggest surprise with the sport?

BW: It’s a different type of sport than let’s say baseball or the NFL. There isn’t as much structure to it, but it makes it exciting. That would be the biggest difference in our relationships with other properties.