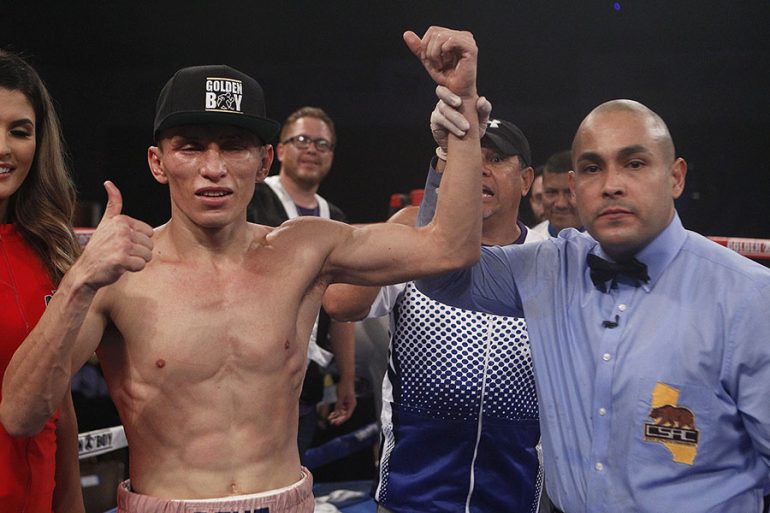 Rene Alvarado will face a familiar foe in his first world title challenge as he takes on Andrew Cancio for Cancio’s WBA “regular” junior lightweight title this Saturday at the Fantasy Springs Casino in Indio, Calif.

The fight will be a rematch of their first fight back in 2015, when Cancio scored an eighth round knockout victory over Alvarado. The bout will be be streamed live on DAZN.

The loss to Cancio began a rough stretch of three losses in four bouts for Alvarado (31-8, 20 knockouts), which also includes a unanimous decision loss to Yuriorkis Gamboa. Since then Alvarado has won seven in a row, including a close decision over former titleholder Denis Shafikov and a title eliminator victory over Carlos Morales last year.

“It was a very rough time for me ever since I started my boxing career in the United States,” Alvarado admits. “I took all the lessons, placed my faith in God and worked hard to find success. My team did not give up on me and did not allow me to give up.”

Although the winning streak began following the loss to Gamboa, Alvarado still kicks himself that he didn’t do more to tip the decision in his favor in a bout which was fueled by emotion for Alvarado and his family.

“I should have won that fight, but truthfully I just wasn’t mad enough,” Alvarado recalls. “I needed to be more angry but I just wasn’t and it cost me the fight.”

Although he doesn’t want to use it as an excuse, the Nicaraguan Alvarado also had to grieve the death of his seven-month-old daughter before the Gamboa fight. Alvarado channeled his pain into his training and began to gain confidence that his boxing career was far from over. Alvarado expected to challenge Alberto Machado for the title and was ringside for the first fight against Cancio (21-4-2, 16 KOs) earlier this year, when Cancio scored a shocking knockout.

“I wanted to congratulate Cancio but I also knew they would have a rematch so I would have to wait longer,” Alvarado said. “Machado was the favorite to win that night but sometimes in boxing surprises happen. This Saturday will be another surprise when I defeat Cancio and take the belt home. I don’t mind being the underdog.”

The 30-year-old Alvarado, who is rated no. 9 by The Ring at 130 pounds, believes he has improved a great deal in the four years since losing to Cancio, and is coming into this bout with his confidence at an all-time high.

“I learned from the first fight,” Alvarado recalls. “I will not make the same mistakes. I will have to fight a smart fight and pressure him. I can throw punches from every angle and at anytime. He will have to deal with the pressure and we feel he will not be able to.”

Alvarado is not concerned that the popular Cancio will have the home court advantage at Fantasy Springs as the world champion makes his fifth consecutive appearance in the arena and his second title defense.

“We don’t believe we need a knockout to win the title,” Alvarado said. “If I dominate every round of the fight I will be the world champion and we trained to do just that. I will dominate him and make him very uncomfortable.”