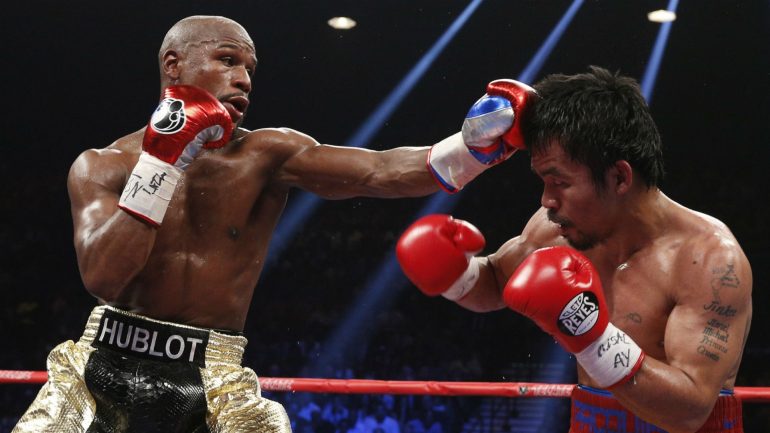 The United States Court of Appeals for the Ninth Circuit ruled Thursday that fans who were disappointed over the anticlimactic Floyd Mayweather vs. Manny Pacquiao fight in 2015 could not sue organizers and participants.

The court’s 3-0 decision affirms an earlier court decision from 2017 against the class action suit, where aggrieved fans stated that they would not have purchased tickets to the welterweight title fight had they known Pacquiao suffered an injury to his right shoulder in training. Viewers only became aware of it when it was mentioned during the broadcast, which was distributed in the United States on pay-per-view by HBO and Showtime.

Pacquiao and Mayweather were both named as defendants, along with HBO, Mayweather Promotions, plus Pacquiao’s then-promoter Top Rank, and its figureheads Bob Arum and Todd DuBoef, as well as Pacquiao’s advisor Michael Koncz.

The court agreed with the previous decision that plaintiffs “have not suffered a cognizable legal injury because in short, they got what they paid for.”

Nguyen mentioned Tyson again, referring to the Castillo v. Tyson decision from 2000, when an appellate division of a New York state court affirmed a lower court’s dismissal of class action claims relating to Tyson’s 1997 “Bite Fight” incident against Evander Holyfield, ruling that “plaintiffs received what they paid for, namely, the right to view whatever event transpired.”

The Pacquiao-Mayweather matchup was billed “Fight of the Century” but much of the drama had been drained of the bout shortly after the opening bell. Pacquiao was able to stun Mayweather briefly in the fourth with a counter left hand, but otherwise, Mayweather remained in control for most of the bout, limiting Pacquiao to a decade-low 81 punch connects, according to CompuBox, and winning a unanimous decision.

Pacquiao revealed afterwards at the press conference that he had suffered an injury a month ago. Koncz, who filled out the Nevada State Athletic Commission’s pre-fight medical questionnaire, did not mention the injury, according to court papers. It was only on fight night, three hours before the first bell, that a Top Rank employee requested that Pacquiao be allowed to receive an injection of an anti-inflammatory medication, which the commission denied because the injury had not been mentioned on the questionnaire.

The court also states that mandating athletes to disclose all injuries, under risk of lawsuit, would “fundamentally alter the nature of competitive sports,” adding that “opponents would undoubtedly use such information to their strategic advantage.”